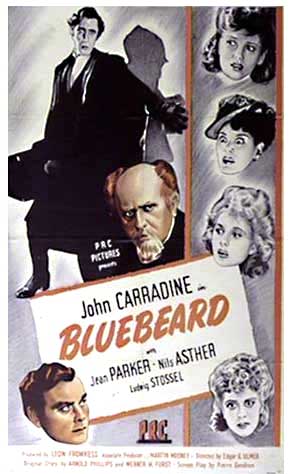 SYNOPSIS:
“A killer of young women, dubbed Bluebeard, is loose in Paris. Lucille and her friends meet Gaston Morrell, a puppeteer. He invites them to a show the next night – they go. Afterwards, he walks with Lucille, she offers to make costumes for his next show, he accepts, and feelings develop that may lead to love. She suspects he has a tragic past. Meanwhile, his leaving the show with Lucille prompts the jealousy of Renee, Gaston’s sometime lover. Lucille’s younger sister, Francine, comes back to Paris – her boyfriend is Inspector Lefebre, who’s hunting for Bluebeard. Some clues point toward Lamart, a greedy art dealer. Who is in danger, and can Gaston be trusted?” (courtesy IMDB)

REVIEW:
This week’s offering from the wild and crazy world of low-budget, past-their-commercial-use-by-date horror films, is Bluebeard (1944), made by people with talent. Indeed, there’s not much wrong with this variation on the old legend of Bluebeard, the serial killer of his own wives, that a decent budget couldn’t have fixed. It has a skilled director, Edgar G. Ulmer, already experienced in doing good work on modest budgets, and the lead is played by John Carradine, an actor of considerable ability, well known to devotees of cheap horror and science fiction films. He has played a Mad Scientist and Mad Doctor, and this time he’s a Mad Artist. But at the start of the film he is a Mad Puppeteer, and I for one was pleased when he resumes his earlier occupation of Mad Artist. Mad Scientists, Doctors and Artists I can deal with, but don’t let Mad Puppeteers near me! “They’re responsible for all my misdeeds, Mad Puppeteers have been the spoil of me,” as I explained to the judge, a very sympathetic and understanding gentleman. But I digress. 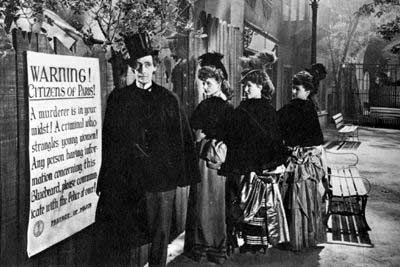 Bluebeard’s director, Edgar Ulmer has a rather impressive CV. Born in Vienna in 1900, by the early twenties he was working as an assistant to master director F.W. Murnau, whose horror tour-de-force Nosferatu (1922) I discussed recently. In 1929 he and Robert Siodmak co-directed the acclaimed semi-documentary People On Sunday (1929), an awfully boring topic, even for a documentary. Also in the crew for that film was Billy Wilder and Fred Zimmerman. Come the rise of the Nazis, Siodmak, Wilder and Zimmerman all emigrated to Hollywood and found work with major studios, over the years turning out superb films like The Spiral Staircase (1945), Double Indemnity (1944), Sunset Boulevard (1950), High Noon (1952), From Here To Eternity (1953) and A Man For All Seasons (1966). Edgar worked once for a big studio, Universal, and the result was the horror gem The Black Cat (1935) starring Boris Karloff and Bela Lugosi. 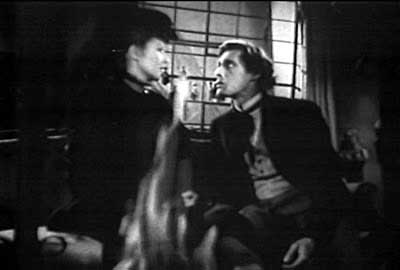 Despite this promising start he was soon working in Poverty Row studios, making Yiddish-language comedies, amongst many other types of films. PRC was considered the most enterprising of the Poverty Row outfits, and it was there in the forties that he did some of his best work. Detour (1945) is still considered one of the best of all Film Noir. Later efforts such as The Man From Planet X (1951) were not so good, and some time soon I’ll discuss The Amazing Transparent Man (1960), and you’ll understand not even Edgar Ulmer was able to make a worthy film out of that one. 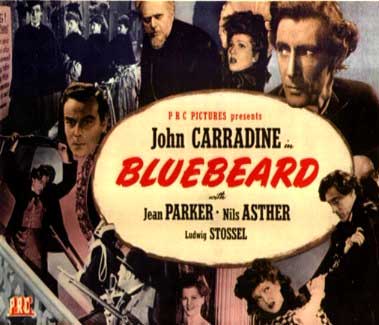 Bluebeard was well suited to his talents. The influence of the Masters of German Expressionism he had worked with is palpable. Lots of odd-angle camera shots, misty streets, ill-fated protagonists moving towards doom amidst remarkable compositions of shadows and light. Other than the occasional tilted streetlight, the set design is quite conventional. I blame that damned miniscule budget! The sets were designed by Eugen Shufftan, better known as a cinematographer and creator of the Shufftan process. This was a technique whereby live action was combined with scale model sets by means of a semi-transparent mirror. He invented the process to meet the demands of filming Fritz Lang’s science fiction masterpiece Metropolis (1927). Shufftan had also photographed Ulmer’s People On Sunday, where no trick photography was required, but might have made a vast improvement. Once in Hollywood, union problems kept him from being named as a cinematographer and he turned to set design. The problem was resolved by 1961 when he received an Academy Award for photographing the Paul Newman film The Hustler (1961). The French horror classic Eyes Without A Face (1960) also benefits from his involvement.

Speaking softly and widening his eyes when in the grip of murderous passion, this eternal supporting actor makes the most of his rare leads and delivers some genuine chills. Over John Carradine‘s fifty-seven year film career, his lean-and-hungry look landed him roles in many horror films ranging from a bit-part in The Bride Of Frankenstein (1935) to Dracula in House Of Frankenstein (1944) to an elderly werewolf in The Howling (1981). Early in his career he had important supporting roles in mainstream films, including Stagecoach (1939), The Grapes Of Wrath (1940) and The Ten Commandments (1956). These roles dried up and this wonderful actor, who once toured with one-man Shakespeare readings, ended up in such dubious films as Sex Kittens Go To College (1960) and Billy The Kid Versus Dracula (1966). These films received no awards at Cannes. He sometimes appeared in films with one or another of his three talented sons. David, Keith and Robert have all had successful careers, as has his grand-daughter Martha Plimpton. 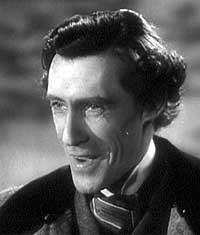 I wasn’t surprised when the police sting operation went wrong, and a brave civilian acting as bait was killed – were you? Living as they did during the Reign Of Terror, these Parisians were not able to become regular viewers of The Bill. If they were, they would know that confidently-given assurances of safety and police protection are so often succeeded by scenes of guilt-stricken officers agonising over what went wrong. One of the many drawbacks of living in the age before television! And Paris does seem to be a magnet for Mad Artists – remember The Phantom Of The Opera (1922)! He too committed crimes during and after performances of the opera Faust, the very same opera performed so charmingly by puppets in Bluebeard. I’m starting to think the opera Faust has been the source of more bad luck than even that Scottish play! Bluebeard is badly in need of a restoration, but as it’s not likely to get one, there’s no point in waiting, so that’s it. I’m hoping to enjoy your company next week when I have the opportunity to discuss another treasure from the trove that is the Public Domain for…Horror News! Toodles!