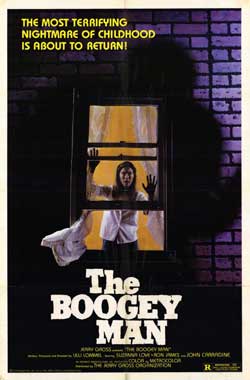 20 years after killing off their mother’s twisted, abusive lover siblings Lacey and Willy find themselves being targeted by his evil spirit after it is released from a mirror that was present during the time of his death. Will they find a way to defeat him or are they (and everyone they hold dear) destined to die horribly at his hands?

I’m not sure if I liked The Boogeyman or not. I didn’t hate it, but at the same time I’m not in any hurry to watch it again anytime soon. One of the many problems that I had with it was the fact that the title is misleading as Hell. The actual Boogeyman doesn’t make an appearance in this film, but we do get some nameless guy wearing a pair of pantyhose on his head in his place. It makes no sense to me why this film is called The Boogeyman when it has nothing whatsoever to do with that character. I assume director/co-writer decided to call it that to mislead people into going to see it because they were under the impression that it was about the actual Boogeyman (I bet these people were mighty disappointed). Instead of a cool movie that featured the Boogeyman jumping out of closets and slaughtering people or pulling little kids under beds and tearing them to pieces this film is a mediocre little flick that rips off much better movies such as Halloween, The Exorcist, and even The Amityville Horror to a lesser extent (as the house that the main characters live in looks a hell of a lot like the Amityville house). 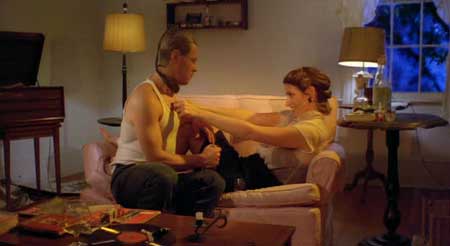 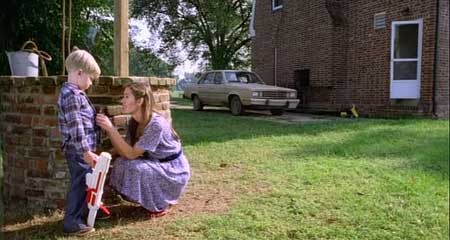 I’ll give the people behind it props, I did think that the way the killer returned to menace the family twenty years after his death was a pretty cool idea (his spirit is released after a mirror that was in the room when he was killed is broken, allowing him to roam around freely and kill whoever he wants whenever he wants). It was probably the only original and likable thing about the entire movie, but it got to a point that the whole mirror thing started to get ridiculous as well (the mirror is smashed all to f*ck but Lacey’s husband is able to put it back together perfectly in a matter of minutes?!? A huge shard of it is missing but no one seems to notice??! A piece of the mirror attaches itself to Lacey’s eye and possesses her!?!?!) and is way overdone (don’t even get me started about the bit where Lacey’s kid gets a shard stuck to the bottom of his shoe which leads to the deaths of a couple of people who have nothing whatsoever to do with anything at all). It was like the writers got together and brainstormed all the things that they could do with a mirror and mirror shards when they should have been more concerned with creating better characters, a back story for the killer, and just a better premise for a movie in general. 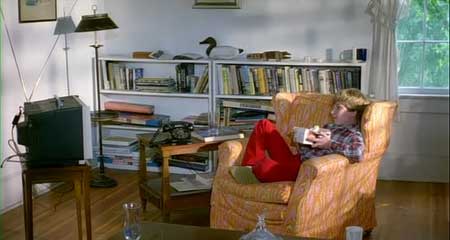 I also found most of the characters to be annoying as hell as well. I didn’t really care for Lacey as I found her to be a little too whiney, and I have no idea what was up with Willy. I get it that he was traumatized and couldn’t speak after stabbing his mother’s lover to death all those years ago, but why does he attack the chick (and basically choke slam her) when she comes on to him? I absolutely hated Lacey’s husband (who forces her to go back to the house where the traumatic event that resulted in her mother’s lover being stabbed numerous times took place and then yells at her when she understandably freaks out) and couldn’t wait for him to die (sadly he doesn’t). I also found Lacey and Willy’s aunt and uncle (who took them in when they were younger) to be weird as f*ck and almost scarier than the actual evil spirit that is going around killing people for a number of reasons. Overall none of the characters really appealed to me and I didn’t really give a shit if any of them lived or died. 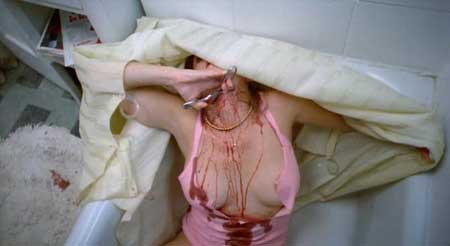 Don’t get me wrong, I didn’t absolutely hate The Boogeyman, but I thought that it could have been a lot better. I think it should have been called Man in the Mirror (damn, now I have that Michael Jackson song stuck in my head) as it is a more appropriate title. It is much better than the 2005 abortion of the same name (where Barry Watson defeats the legendary Boogeyman by kicking him in the face really hard) but at the same time it isn’t going to make an appearance on my list of favorite movies of all time. Check it out if you don’t have anything better to do, but don’t expect to be amazed by it.