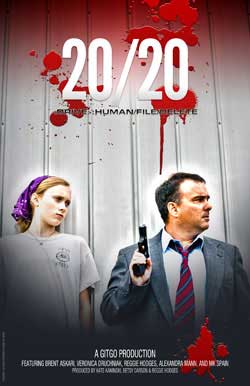 In 2010, time is running out for those who haven’t already been affected by an inexorable super-virus that spreads from computers to humans through radio waves.

We are told that the planet has changed. An intelligent force has taken over, namely our own technology. This new program which is dubbed 20/20 is a version the Albert Eistein program which ______

We are told that the planet has changed. An intelligent force has taken over, namely our own technology. This new program which is dubbed 20/20 is a version of the Albert Einstein program which was introduced into society to aid in its progression. Of course, the program itself got smarter.

The program has released a virus into the population which primary goal is to eradicate humans. We find ourselves with a few lone survivors making their way on to a rumored sanctuary of sorts where the population has gathered free of viral infliction. 3 hippy travelers cross paths with a man and his daughter. The land has become desolate and survival is the key if you want to make your destination. As they all push forward the only thing left to hang onto is hope and a reason to live. This of course is subject to the conditions they hope for.

This short film directed by Kate Kaminski follows a trend of film directions which we are quite familiar with in this day of zombie films and end of day works. Though while this isn’t a zombie film, it carries an affinity with films that base themselves on rescue and location. Such films location Resident Evil also incorporate this idea into its mix. Kate has proposed we investigate a different take. That is that we may render ourselves extinct someday thru our own technology. This idea is one that has crossed the minds of techies and doom-saysers. It’s not without a certain air of truth as we create easier means to take over more undesirable tasks in our lives. While the film is only 16 minutes it still asks the question and presents itself in a dramatic touching way. The film was produced professionally and also seeds an idea that could be expanded on into a feature.

Reports mention The film premiered as part of “DAMNATIONLAND: THE WAY LIFE SHOULD BLEED”