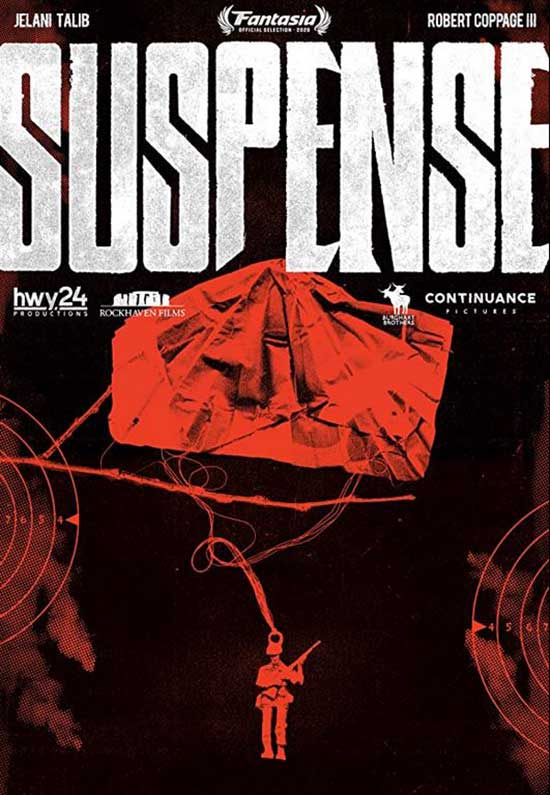 Having survived a harrowing plane crash, an army pilot finds himself suspended from a canopy of trees high above the forest floor by his parachute. After making contact with his co-pilot on the ground, they realize that something is stalking them in the dark.

More short films, kiddies! Today we have SUSPENSE, written and directed by Ben and Jacob Burghart. This short film is brought to us by a company called ALTER.

“ALTER is a new horror brand that explores the human condition through warped and uncanny perspectives. Giving voice to emerging, diverse and established filmmakers, we create inclusive narratives for a modern audience, drawing in both the existing genre lovers of beloved, horror classics (“Evil Dead”, “The Shining”) as well as crossover audiences of new genre hits (“A Quiet Place,” “Get Out”). ”

In this film, we see what happens when two pilots (military, possibly, but not entirely certain about that) have to bail out in the middle of nowhere. One of our pilots gets his parachute caught in a tree. That sucks enough, but there’s some sort of….THING in the woods, and it seems awfully hungry.

Will his buddy find him in time? or is our hero about to become lunch?

As the title suggests, its more about the suspense than actual gore or things with teeth. Its not about IF the monster will get them. Its about WHEN.

Alfred Hitchcock said something about suspense films. I’m paraphrasing here, but he said suspense is knowing something will happen even as the characters on screen do not. He described a bomb under a table, and the audience can see the timer so we know when it will happen. But the people at the table have no idea the bomb is even there.

This film seems to follow that logic. We know there is something out there. We even get to see it briefly. But the poor guy stuck in the tree…yea he has no idea what’s going on. He just knows something is terribly wrong.

I enjoyed this one. Its well produced, looks great, the acting is good, and its a pretty straightforward short film.