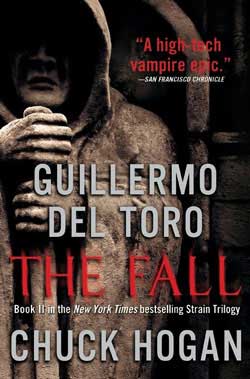 Vampires have become the hot commodity on the market but what they’ve been turned into is a far cry from those of the past. They are now hunky and sparkly and everything that the horrifying Nosferatu was not. In this vampire dominated artistic culture it is hard to ferret out the good from the lousy. Fortunately, I was given the opportunity to read the second novel in an apocalyptic vampire trilogy, The Fall by Guillermo Del Toro (yes the very one you’re thinking of) and Chuck Hogan.

This vampire trilogy is nothing like those novels that have flooded the market in recent years. This novel is one that plays on the fears of human-kind and the terrifying possibility of a complete and unstoppable epidemic. The vampires (or strigoi, as they are known) in this novel are not the normal “bite-on-the-neck” variety but one of animalistic and zombie-like carnage. Instead of normal fangs they have stingers that lash about at their prey and white oozing blood filled with parasitic worms ready to infest in their next unfortunate host.
The beginning of this apocalypse, while we discover is somewhat fated, is primarily the work of a very wealthy, and very sickly, man named Eldritch Palmer. Palmer summons the Master who is flown in within the cargo hold of a commercial plane. Unfortunately, when the plane touches down at it’s destination it is found that the majority of the passengers are dead (by mortal standards anyway). Soon this vampiric plague begins running rampant, not only through the streets of New York but throughout other countries as well.

To combat this new plague are Abraham Setrakian (an aging pawnbroker with a tragic past), Ephraim Goodweather (a former CDC doctor), Vasiliy Fet (a city pest control worker), Zack Goodweather (Ephraim’s son), and Nora (Eph’s girlfriend and fellow CDC doctor). Some other members such as Gus Elizalde (a gang member turned vampire hunter), Creem (a former rival gang member of Gus’s who assists in the vampire killing), and Angel Guzman Hurtado (a former wrestler/star called The Silver Angel, who joins up with Gus’s crew) aid our main characters.

An unfortunate wrench thrown into Eph and Setrakian’s quest is that of Kelly Goodweather (Eph’s ex-wife and Zack’s mother) who has been turned into a vampire and is seeking out her son.
With only a few weapons, the group tries to take on the vampires running rampant through the streets of New York. These weapons, of which are the vampire’s Achilles heel, include weapons of pure silver and UV lamps. These tools prove extremely valuable in saving the lives of our main characters. Another important tool that Setrakian desperately tries to get his hands on is the Occido Lumen which is a complete guide to the rise of the strigoi which could be the only thing to save humanity.

Setrakian, in particular, has a very long and brutal past with the strigoi; a prisoner in a Jewish concentration camp Setrakian first met up with the strigoi in the form of a Nazi officer named Eichorst. The two seem to continue to cross paths throughout Setrakian’s life and, of course, meet up again during this strigoi-induced apocalypse.

Yet another enemy of the Master, and his new breed, is that of The Ancients who are the original vampires. They are a very selective group who do not wish to taint the vampire line with these new “impure” beings. The Master, who was once one of them, is a rogue who The Ancients know will be their inevitable downfall. The Master’s lust for power over all human kind takes over and drives him to this mass destruction.
There really is so much to say about this novel, so many aspects and character dramas that it is difficult to pack it into just one review. I have not read the first novel of the trilogy but I’m sure it is equally as interesting. I am curious to read the third in the trilogy to see whether the human race makes it or not. This novel is unique and fascinating as it touches on pieces of history and long forgotten tragedies that end up playing a part in fueling this apocalypse. I would recommend this novel to anyone because this is definitely not your average vampire epic. 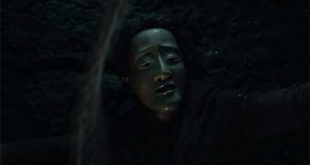