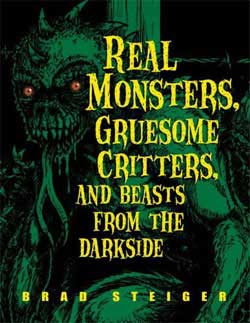 Award-winning author Brad Steiger has been covering the world of unknown and unexplained phenomena for over five decades, authoring more than 170 books and articles on various occult subjects. His latest effort, “Real Monsters, Gruesome Critters and Beasts from the Darkside“, serves as an epic compendium of his collected research and covers topics as far-ranging as shape-shifting cat demons, birdmen, mohawk apes, abominable snowmen and, literally, everything in between. Acting as both curator and tour guide of the cryptozoological realm, Steiger generously shares the spotlight with a number of the world’s foremost researchers and authors who all make numerous contributions in their area of expertise throughout the book.

When it comes to cryptozoology, it can be easy to dismiss event the most well-documented claims as rubbish. Traditional science makes great sport of debunking the latest bestial sighting and no reputable publication will provide a forum for the eyewitness account. But as one takes a closer look at some of the reports from different parts of the world, recognizable patterns begin to emerge that could very well make naysayers reconsider their position. Of course, many of the reports may indeed be the product of over-active imaginations, but just like myth, there could very well be a kernel of truth hidden beneath the accumulated layers of fiction. Which is why we should all feel lucky to have Brad Steiger out there taking a closer look at many of the legends that have swirled through our collective unconscious for countless millenia.

Steiger kicks things off with a list of the Top Ten Real-Life Monsters (drawn from nominations provided by the world’s preeminent cryptozoologists, paranormalists and assorted researchers), which include Bigfoot and Mothman (tied for first) down through the Dover Demon (#10). The list also includes the Jersey Devil, Springheeled Jack, Nessie and a few of the other usual suspects. This list serves as a nice introduction to the scope of the volume, which is exhaustive, to put it mildly. Broken up into 27(!) chapters, Steiger’s book covers every beast imaginable, with most accounts accompanied by first-person reports of real-life encounters. Some of the stories are harrowing, such as William Bartlett’s tale of his encounter with the Dover Demon, while others, like Don and Peggy Avery’s supposed 20-year friendship with a Sasquatch, are almost heartwarming.  The chapter on lake monsters is a highlight, as are the chapters describing the various incarnations of lizard people and the famous Mothman.

Steiger’s passion for his subject matter is evident throughout the book, which makes for a pleasurable tour through the shadow-filled underworld that so many of his beloved creatures inhabit. In addition to being a fun, well-written book, Steiger’s volume also serves as a must-have reference for genre authors and filmmakers who might be looking for the source of their next inspiration. There are literally hundreds of unique monsters and beasts to be found in Steiger’s book, all just waiting to be discovered by the next filmmaker with the imagination to bring them to life on the screen. As you might have noticed, there is a glut of vampire and werewolf material clogging the airwaves and shelves these days. Vampires are popular and sexy, but I’d put my money on a Piasa any day of the week…