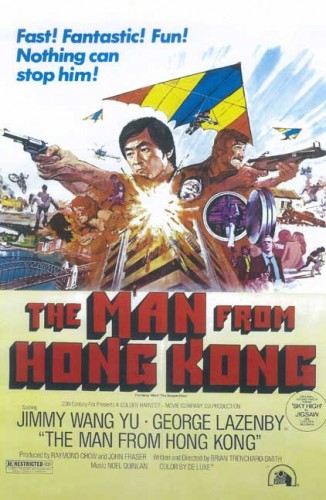 “The film opens at Ayres Rock where undercover detectives arrest Hong Kong drug courier Win Chan. The film switches to the Hong Kong Police Training School where a hang-glider piloted by Caroline Thorne lands on the parade square. She is met by Inspector Fang Sing Leng who has been chosen to travel to Sydney to interview Win Chan. Fang is met by detectives Gross and Taylor who have been unable to obtain any information from Win Chan. Fang uses traditional but illegal police methods to elicit cooperation from Win Chan. Fang discovers the connection between Win Chan’s drug imports and Sydney gangster Jack Wilton. Inspector Fang becomes a target of death by both Australian and Chinese criminals. He also reacquaints himself with Caroline who trains him how to fly a hang-glider, which the Inspector uses to gain access to Wilton’s crime headquarters.” (courtesy Wikipedia)

The mid-seventies saw a renaissance in Australian cinema, producing such films as Picnic At Hanging Rock (1975), The Devil’s Playground (1976) and The Getting Of Wisdom (1978). These films aspired to fulfill the artistic potential of the medium and helped shape the cultural values and national identity of a still-young country. Thankfully The Man From Hong Kong (1975), also known as The Dragon Flies, devoted itself entirely to the business of keeping an audience of fun-loving morons constantly entertained. It wasn’t made for the ‘arty’ critics – it was probably Australia’s first action movie, and it pretended to be nothing else – and thirty-five years later it’s still chock-a-block full of laughs and gasps.

The film opens with an action-packed pre-credit sequence involving a helicopter car chase inter-cut with a fist-fight at Uluru (formerly known as Ayres Rock) that firmly announces the film’s style – fast and furious with tongue firmly planted in cheek. Next up, the credit sequence over Hong Kong accompanied by Jigsaw‘s number one song Sky High. Now check your watch – you’ve probably seen more stunts, explosions, punches and kicks than in any other Australian film – you’re only ten minutes in and our hero hasn’t even been properly introduced yet!

Enter Inspector Fang Sing Leng (Jimmy Wang Yu), who arrives in Sydney to extradite Asian drug smuggler Win Chan (Sammo Hung). Assisted by two federal drug agents (Hugh Keays-Byrne and Roger Ward), the Inspector leaves a long wide trail of destruction in his wake, all in the name of justice. Luckily for the viewer, this destruction offers up all manner of excess, including a seemingly endless chase scene through East Sydney which climaxes in a deadly duel between Jimmy Wang Yu and Australian stunt legend Grant Page.

George Lazenby, once Australia’s own 007, is relegated to portray super-villain Jack Wilton (gunrunner, dope smuggler and all-round evil mastermind), and he takes his demotion with a seedy sort of dash. George’s fight scenes in On Her Majesty’s Secret Service (1969) are widely regarded to be the best in the James Bond franchise, and his kung fu fighting in The Man From Hong Kong is truly spectacular. He fights hard, mean and dirty and, miraculously, isn’t afraid to be set on fire for the film’s climactic showdown.

Although George obviously has a ball delivering his bad-guy dialogue through permanently clenched teeth, the film is stolen by the detective double-act of Ward and Keays-Byrne: Ward is the straight-man with a wardrobe straight out of the fifties, and Keays-Byrne is the bear-like narcotics cop with a tin sheriff’s badge pinned to his chest. Keays-Byrne has made a career out of playing chilling loonies – his Toecutter was the highlight of Mad Max (1979) – but The Man From Hong Kong wonderfully exploits his criminally underused comic talents.

Rounding out the cast is Rebecca Gilling and Ros Spiers as the Inspector’s love interests, and their willingness to disrobe generally exceeds their acting ability. Writer-director Brian Trenchard-Smith expertly keeps the film moving like a bullet train, and has a great knack for knowing where to place the camera to get the most exciting coverage. Noel Quinlan‘s energetic score and a cacophony of bullet ricochets and karate kicks compliment Brian’s skillfully choreographed action.

The Man From Hong Kong is seventies Aussie kitsch to be sure, but if you’re willing to forget about political correctness and new millennium fashion sense for 103 minutes, it’s also pure unadulterated fun. And it’s with that thought in mind I bid you farewell, and please join me again next week as we see what the postman leaves on my doorstep – and sets on fire – in Horror News! Toodles! 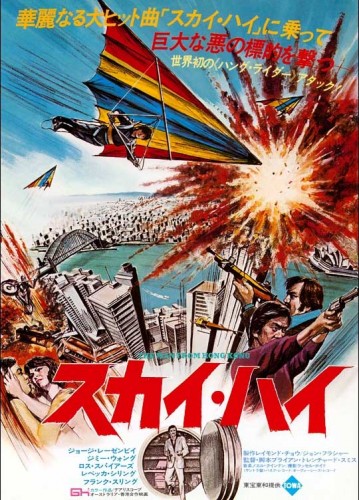