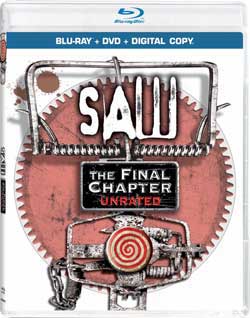 As a deadly battle rages over Jigsaw’s brutal legacy, a group of Jigsaw survivors gathers to seek the support of self-help guru and fellow survivor Bobby Dagen, a man whose own dark secrets unleash a new wave of terror.

You know kiddies, I remember a time a few years ago when I & most of American horror fans went to see a movie called “Saw“. I thought it was intelligent, thrilling & had one great f*cking ending. Apparently a lot of others thought so as well because they went on to make 6 others, there were a few bad apples in those following installments but overall you wanted to see the next installment because they actually were 6 pieces of a complete story. Sometimes the storytellers veered off track but they were all designed to further a story along to it’s inevitable conclusion. You don’t get a lot of this with any franchise (save Harry Potter) at all. 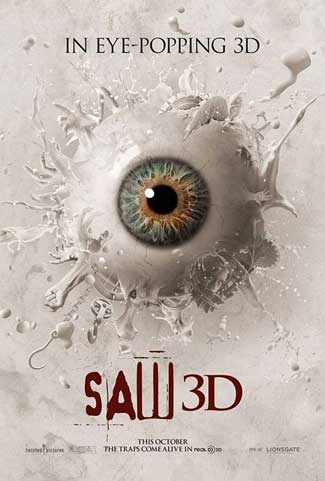 “SAW VII 3D” takes pride in being the “First theatrical feature to be shot on the SI-3D digital camera system”. I guess that’s a plus because the 3D is effective. The guts & gore come flying right out at you. And the traps…oh the traps are some doozies to be sure. The best in the series I would say without hesitation. What the film isn’t though…despite what Lionsgate says, is the last “Piece of the puzzle”.

If you’ve seen the previous 6 “Saw” films there’s no need to write about what happens here, you’re going to want to see it for yourself. If you haven’t seen them you wouldn’t be reading this more than likely but you might go see this one for the 3D, but you’ll be more than a little lost with the story & the way it travels to it’s conclusion. “Saw 3D” pretty much picks up where “Saw VI” left off & starts running to the goal post with the ball looking to score big with it’s fans. But all it really does is, as a friend of mine who was at the screening noted “Gather up as many out of work actors from the previous installments & toss them into a pretty messy script”. And he is right. 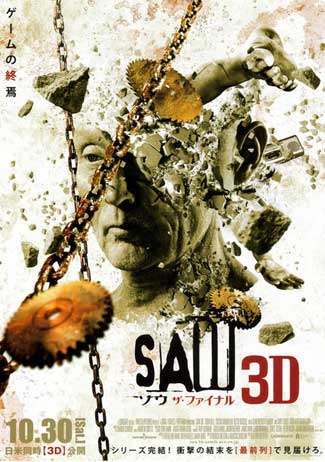 I can divulge that the main part of the story centers around Sean Patrick Flannery as Bobby. A man who claims to be one of the few that have escaped from one of Jigsaw’s traps & writes a book on it. The book is successful & now he on a tour promoting the book on TV & in bookstores. He even has “AA” style meetings for people who have escaped from Jigsaw’s clutches to prove to them that they have been empowered by Jigsaw & his traps. Even though in escaping them they’ve usually maimed themselves something awful. 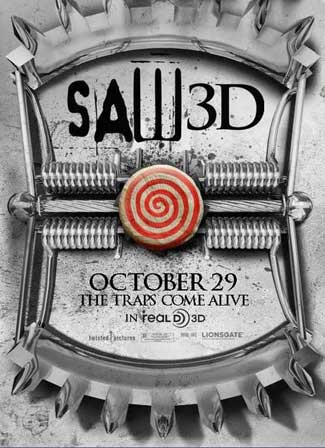 And awful is what Bobby is doing, because he never was one of Jigsaw’s victims. He has the scars on his chest (which are never explained) that he says is where he had to hook himself through to escape his particular trap. But he never even met our buddy Jigsaw, he just had a great idea & ran with it. And in the interim is making some nice cash while he lies about his encounter with Jigsaw.

The film does bring in every actor that didn’t die in the previous films including Cary Elwes from the original “Saw” to make a special appearance & tie the story up in a box wrapped in a nice bloody intestine. It was fun to see him again because we never did find out what happened to his character in the first film…..

But that’s all it is. Jigsaw died in 3 or 4 (I don’t remember which one) & Costas Mandylor was doing all the killing as Detective Hoffman for the last few installments. The story does end where the last one ended so if you see that as a conclusion to the story, well then good for you. 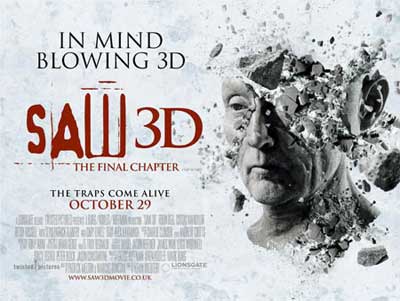 I saw it as an opportunity to make a few more of these bastard children of the first “Saw” & I’m sure the producers did as well. The story isn’t over…it’s just being delayed for a bit. When you see it you’ll know what I mean. The technical aspects are all up to snuff, and save for the acting of Chad Donella as Gibson so are the actors. Gibson just doesn’t seem to have his heart in this one. 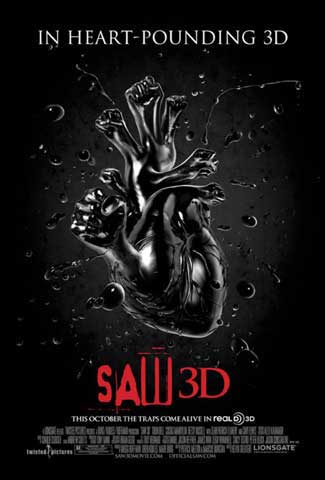 But if you’re going to see an ending to the series I fear you may be disappointed. If you’re going for some cool 3D grue then you’ll leave the theatre happily covered in it. All in all The Saint is giving it a 3 out of 5 Shrouds for the exemplary effects. They really kick ass. But I fear that we have been lied to again by Hollywood. How many times have Michael, Freddy, Jason or even Chucky died only to return to wreak more havoc? I guarantee we’ll be hearing from this franchise again & that saddens me just a bit because we’ll all be there swimming in the pond when the producers throw their “Saw 8” line in the water & we’ll be hooked or rather hoodwinked again.