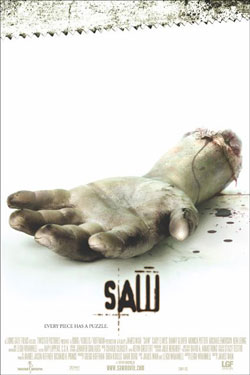 Would you die to live? That’s what two men, Adam (Leigh Whannell) and Gordon (Cary Elwes), have to ask themselves when they’re paired up in a deadly situation. Abducted by a serial killer, they’re both holed up in a prison constructed with such ingenuity that they may not be able to escape before their captor decides it’s time to dismantle their bodies in his signature way. Attempting to break free may kill them too, but staying definitely will.

Hell-o, everyone. This is a film that has had another sequel spawned every October after the release of the original. The sequels are still coming as part six opens this month in a theater near you. Pre-production for the next sequel has ritualistically gone underway as soon as the new installment is released. This film has also spawned a new video game and the first ever Horror movie themed Roller Coaster. Not only that, but one of the Horror genre’s newest iconic villains. His name is (later revealed as) John… Also known as “Jigsaw (which is rumored to be based off of the crimes of an actual serial killer).” This new Horror franchise that returns every Halloween season is of course none other than SAW. 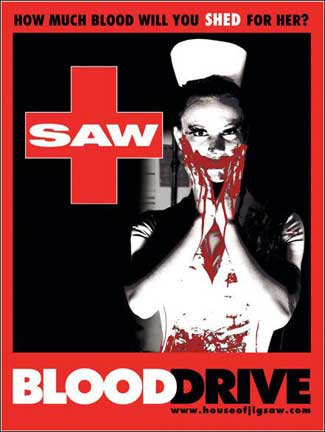 This origin of the now infamous annually unleashed franchise is probably the best idea I’ve seen for a film in a while. If this is based on actual killings, that dude was pretty innovative. The atmosphere is unsettling at times and the introduction of the killer, Jigsaw, is quite menacing. The idea and motives for the kills are very creative and almost in the Seven vein. In this case, each victim does not necessarily die for their wrong doings, but they have to almost sacrifice themselves to stay alive. This is accompanied by a (recorded, of course) sinister voice of the hidden killer on a cassette tape and a televised image of a controlled puppet, dictating their torture and demise while explaining their crime against humanity. Torturous devices of metal are hand crafted (used more often in the latter films of the series) and demonstrated. The victims of this film just aren’t killed… but tortured, quizzed and mentally and physically tested to the extreme how far they would go to escape or stay alive. 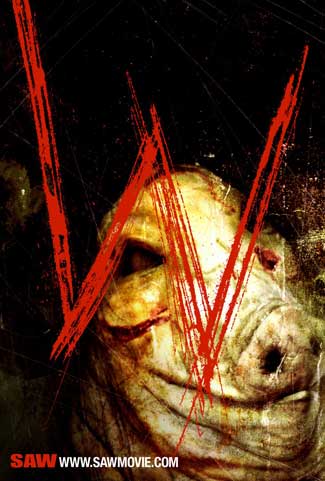 The twist ending (which of course will not be spewed forth here) was pretty sweet and quite surprising as well. Again, a ten on the creativity scale. The portrayal of the victim, Amanda (who has returned throughout the series), played by Shawnee Smith (Summer School, Stephen King’s The Shining, Stephen King’s The Stand and The Blob/ Producer of Thirty Days of Night), is tackled with an awesome performance that has lasted throughout the series (or the ones I’ve seen anyway). If I have any complaint (and I’m not the only one…), it would be with the performance of one of the writers(as an actor). It was just not believable in the slightest. His lines were emotionless, with poor delivery. and I did not see a career as far as acting goes. He should absolutely keep writing though. 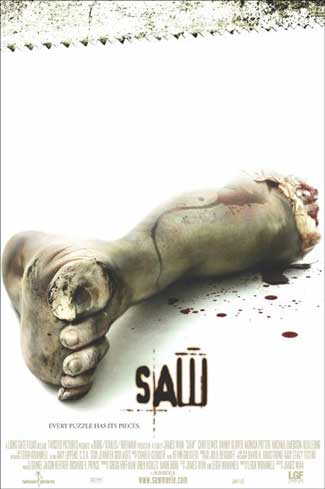 Jigsaw has already received iconic status as one of cinema’s growing menaces of motion picture and only at age six (but armed with a rapid growth spurt and fan base). Personally, I enjoy seeing Tobin Bell as a person more than a voice distorted doll, although that is cool also (and man-made, along with the rest of his gadgets of gruesome torture and mind f*ckery). I think his personality and aura are more disturbing than even the puppet can display. You can see more of the emotion behind the killer’s eyes, which is no emotion whatsoever. His own voice is more haunting than the distorted dark messenger. You can hear the shallow pain within a hollow soul… Yet this is not revealed until the next installment of the series. 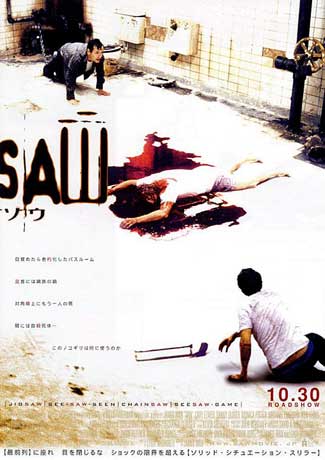 Although the film is not too big on death scenes, the formula used is still effective as the body counts grow with each new chapter. The original is a psychological thriller with the elements of good horror and suspense. Just by feasting your eyes upon one of Jigsaw’s creations, one can tell the damage involved in the execution of each pain and demise inducing device.

All in all, this is a film worth seeing. I firmly believe that the mishap of an individual acting job is not enough to destroy a film or franchise with potential. Obviously, the masses of horror hordes agree. I honestly don’t see the series dying off any time soon. I give this film, SAW, FOUR HORNS UP.