This Halloween season, I’ve been sitting down each weekend with my nine year old daughter to watch the Hammer horror festival on Turner Classic Movies. Horror of Dracula, The Mummy, Curse of Frankenstein, Plague of the Zombies, they’re all here. As we began our third week of flicks to enjoy, my daughter made an enlightening observation; she began to recognize a recurring actor in many of the films we were enjoying. Was it Christopher Lee or Peter Cushing? No, she already knew who they were. The gentleman in question is the fabulous character actor employed in many of Hammer’s movies, Michael Ripper.

If you don’t recognize the name but have seen many a classic horror flick you probably recognize his face or distinctive voice – he’s the barkeep, the coach driver or perhaps the constable. Michael Ripper made over two dozen films for Hammer, most of which were produced by Anthony Hinds. He wasn’t limited to Hammer Film productions, he also had roles in other horror films of the Sixties and Seventies such as The Deadly Bees (1967), Torture Garden (1967), The Creeping Flesh (1973) and Legend of the Werewolf (1975). When you’re catching your next Hammer horror flick this season (or the next), keep an eye out for Michael Ripper and be delightfully surprised at the variety of roles he portrayed and how much he adds to the picture itself. The actor, born in Portsmouth England in 1913, passed away on June 28, 2000. Here are a few roles to watch out for.

Michael Ripper appears as Jeremiah Mipps, the coffinmaker, in Peter Graham Scott’s Night Creatures. Calm, cool and collected, Mr. Mipps is the right-hand man to Reverend Dr. (Peter Cushing) Blyss. When cornered by Captain (Patrick Allen) Collier of the Royal Crown (who is investigating suspicions of smuggling), he shares the legend of the marsh phantoms and suggests they were responsible for the sudden death of the Captain’s informant. In an amusing scene, Mipps startles Mr. Rash (Martin Benson) when he pops up from his resting place, one of his own coffins. Loyal to the end, Mr. Mipps rescues Rev. Blyss from Collier’s band of sailors and is rewarded by having Blyss return the favor when the pirate Mulatto attacks by pushing Mipps out of the way and taking the deadly strike in his stead. In a significant role, alongside a large cast, Michael Ripper is afforded some of the more poignant and touching scenes and shows more range than the others except for maybe the lead, Peter Cushing.

When Dr. Harry Spalding (Ray Barret) and his wife Valerie (Jennifer Daniel) arrive in Clagmoor Heath, they are greeted warmly by only one of the locals, the innkeeper, Tom Bailey (Michael Ripper). Bailey also becomes their closest ally as well as they begin to suspect Dr. Franklyn in the murders that have plagued the small village. Spaulding and Bailey work together to uncover the secrets of Anna Franklyn and Tom saves the couple on two occasions: after Harry is bitten by the snake creature and when Valerie is held captive within the Franklyn mansion. In one of the first of a number of films directed by John Gilling and featuring Michael Ripper (they also made The Pirates of Blood River together in 1963), Ripper is given a more substantial role and brings a much needed friendly face and ally to the proceedings.

Plague of the Zombies (1966) as Sergeant Jack Swift

In John Gilling’s Plague of the Zombies, a rare Hammer zombie film, Michael Ripper is cast as Sergeant Jack Swift. With Constable Christian at his side, Sergeant Swift at first suspects but then quickly aligns with Sir James Forbes, played by Andre Morell, in investigating the mysterious deaths surrounding the small Cornish village in his charge. Together with Dr. Peter Thompson (Brook Williams), they witness Peter’s wife, Alice (Jacqueline Pearce), rise from the grave as one of the undead.

In the third Hammer mummy film, The Mummy’s Shroud, also directed by John Gilling, Michael Ripper is cast as Longbarrow the personal assistant to the greedy archaeological financier, Stanley (John Phillips) Preston. Always loyal, Longbarrow gathers all necessities for Preston: room, board and travel arrangements. Longbarrow, who is a bit timid, speaks longer than he should and comes up just a bit short in all his tasks, is never appreciated by Preston. Unlike The Reptile and Plague of the Zombies, in The Mummy’s Shroud, Ripper’s character must face the title monster’s vengeance.

Dracula Has Risen from the Grave (1968) as Max the Innkeeper

Christopher Lee returns as Count Dracula for the third time in Dracula Has Risen from the Grave, directed by Freddie Francis. Michael Ripper is once again cast as the Innkeeper, this time named Max. Max also employs and shelters the hero of the story, young Paul (Barry Andrews) who is in love with Maria Mueller (Veronica Carlson) the niece of the protagonist, Monsignor Ernest Mueller (Rupert Davies). For the most part, Max is unaware of the dangers that surround his friends and colleagues, and is shown merrily bandying around the Inn behind the lead characters. Ripper’s Max is again a warm and friendly face in the crowd and is afforded a number of touching scenes guiding Paul in the difficult decisions ahead of him.

Taste the Blood of Dracula (1970) as Inspector Cobb

Director Paul Sasdy cast Michael Ripper again as the local authority, Inspector Cobb, in the fifth Count Dracula Hammer film, Taste the Blood of Dracula. In the film, a small group of wealthy men purchase the remains of Count (Christopher Lee) Dracula and perform a dark ritual to bring him back from the dead. Three of the men turn on the fourth as Dracula’s spirit begins to take over his body. Surviving the attack, Dracula begins to plot his revenge on the three men who betrayed him. After the first of the three has been killed, Inspector Cobb begins to investigate the murder – and later, murders.   Limited to two scenes, Ripper’s Inspector Cobb is more cynical and disparaging than in most of his roles. When young Paul (Anthony Higgins) Paxton informs Cobb about the missing Alice (Linda Hayden) Hargood, he quickly dismisses her disappearance as a run-away case despite the continued insistence of it being otherwise. Later, he shows his frustration with Paul and rashly claims that he will not be speaking with Paul again.

Michael Ripper returns in the sixth Dracula film, Scars of Dracula (1970), directed by Roy Ward Baker, as the Landlord of the local pub, a role he would be overly familiar with by this time. Ripper, who has starred in more Hammer Films than either Peter Cushing or Christopher Lee, can also be seen in the following features. He began his Hammer career as Sgt. Harry Grimsdyke in X: The Unknown (1956). He’s a poacher encountering Christopher Lee in The Mummy (1959) and the coachman in the beginning of The Brides of Dracula (1960). In The Curse of the Werewolf (1961) he’s the Old Soak locked up in a cell with Oliver Reed and, in The Curse of the Mummy’s Tomb (1964), he’s Achmed, an Egyptian hired hand falling victim to the Mummy’s curse. There are many character actors over cinema’s long history, but few bring the warmth and charisma that Michael Ripper brought to his roles. Next time you catch one of his many appearances, perhaps it will bring a smile to your face – just as it has this October for me and my daughter. 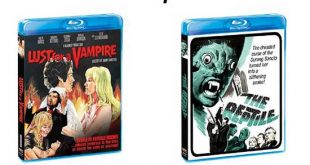