Welcome to the wonderful world of Unexplained Confidential.

This is the column that you come to when you want to look beyond the movies, and find out the reality that The Exorcist and Poltergeist films are based on -or- when you want to learn the difference between Ghostbusters and Ghosthunters.

Today, we talk with Rosalyn Bown, Certified Investigator, Team Leader, and acting Assistant Director with SJGR. This is our third interview with a member of South Jersey Ghost Research sjgr.org/  and there’s a lot of spooky stuff here. How did you get involved in the Ghost Research business?
I have always been interested in the paranormal, and have experienced premonitions since childhood. In my family, the existence of ghosts was pretty much accepted as fact, though it wasn’t something we discussed often.

I first joined South Jersey Ghost Research back in autumn 1999 after seeing the group featured on ABC’s Action News segment Don Polec’s World. Up until that point, I had no idea that such organizations even existed! I left the group a year later due to changes in my personal life, then re-joined in 2007.

Today, I simply cannot imagine my life without the excitement of the paranormal research experience, and the sense of personal fulfillment that comes from helping people who are living in fear of their home’s spirit activity. What does it take to become a SJGR Certified Investigator?
To become a Certified Investigator with SJGR, you must satisfactorily complete an intensive training period which consists of cemetery training investigations, indoor training investigations, equipment training, intro to psychic protection/development training , EVP training, and additional procedural classroom sessions. You must also pass a written test and a practical exam, which is followed by a 3 month probationary period. We have extremely high standards when it comes to our membership, and thoroughly put our trainees through their paces before sending them into a private home to do an investigation. Quite frankly, most candidates simply do no make the cut for one reason or another. Out of my own ten person training class, only two trainees eventually became Certified Investigators.

Do you have any interesting stories from conducting Cemetery Investigations?
One of my most memorable Cemetery Investigations was at Old Swedes Cemetery in Philadelphia, PA. Up until that point, despite having experienced premonitions for most of my life, I never considered myself to be particularly psychically sensitive. However, on that spring evening in 2000, I experienced my first memorable psychic impression. While standing before a beautiful tombstone, I was struck with an overwhelming feeling of love and sadness connected to the woman buried there. It was a fleeting but very real impression that finally opened my mind to the prospect of psychic sensitivity.

Another memorable cemetery investigation was at the Friend’s Burial Ground behind the General Wayne Inn in Merion PA. It was at this small cemetery that I captured my first and only series of ectoplasm mist photos in October 2000.

More recently in 2008, during the annual October Ghost Seminar that we host at Laurel Hill Cemetery in Philadelphia PA, I witnessed a full body apparition walking across the path behind where our group was gathered. At another investigation there, I captured an A Class EVP (electronic voice phenomena) which says “Come On” as we left the paved path and walked up a hill amongst the tombstones.

At another 2008 investigation at the Sacred Heart Cemetery in Hainesport NJ, I sensed a spirit standing near my team. In response to my statement “There’s something over here”, I captured a great EVP which says “Right over here”. What has been your most memorable experience while working for SJGR?
Some of the most impressive apparition photos I have ever seen were captured by Dave Juliano, director of South Jersey Ghost Research. Dave mounted a digital camera behind a night vision scope on a tripod, which enabled him to take digital photos in true Infrared. This combination makes it possible to see things that the human eye cannot naturally see..These three positive apparition photos should be required viewing for any ghost researcher! These photos, along with instructions on how to rig up a similar set-up of your own to experiment with, can be found in the “What’s New” section of our homepage.

Over in the INTERVIEW section of the site, I switch gears and have some intriguing talks with some great directors and actors and the horror elite.

If you are in the paranormal or horror industry and want your interview featured on HorrorNews then please email me at joyhorror@horrornews.net 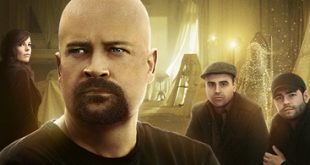