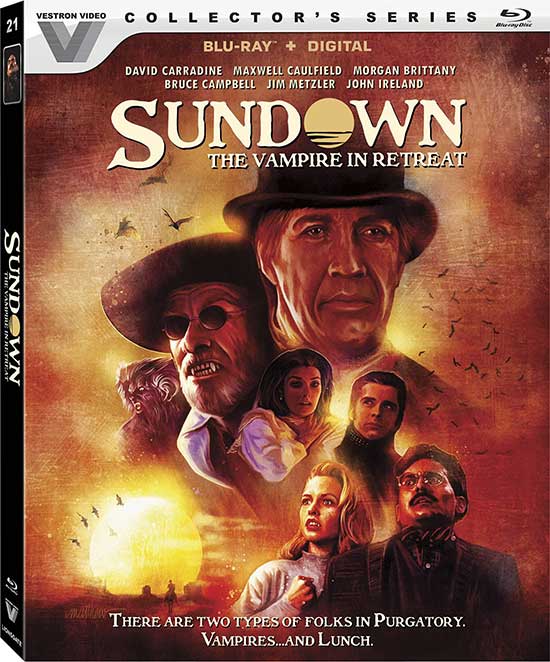 Reclusive vampires lounge in a lonely American town. They wear sun cream to protect themselves. A descendant of Van Helsing arrives with hilarious consequences.

One that snuck under the radar into the final years of the 80’S, was a film titled “Sundown: The Vampire in Retreat“, a campy western rooted vampire release featuring a rather impressive list of actors.

Directed by Anthony Hickox, who also directed 80s’ horror hits “Waxwork” and “Hellraiser III“, “Sundown: The Vampire in Retreat” is the culmination of 80’s sensibilities, comedic tones, and camp from an era that makes this lil ditty a treat to check out

It’s no spoiler to say that the film is a unique, humorous tale on vampires. We begin the movie with an introductory slide that details vampires trying to acclimate to live among humans using methods such as sun block to protect them from the day. It appears that vampires are trying to stay on the moral side of humanity. Well some of them any ways.

The town chosen is a small town called Purgatory of which was purchased and re-founded by head vampire Mardulak (David Carradine) to provide safe haven for his fellow bloodsuckers. Trying to stay civil and ween themselves from human blood, they have constructed a factory specializing in hemoglobin to provide a nourishment alternative to killing and drinking humans. Despite the efforts, the townsfolk still struggle with the denial of fresh warm human blood ultimately leading to a revolt.

Lovely Morgan Brittany from the hit show Dallas stars as Sarah, wife to David (Jim Metzler) a family who has been invited to stay for awhile in town in need of David’s engineering expertise. In addition we have the beautiful Deborah Foreman playing the role of Sandy who you all might remember from her starring role in the movie “Valley Girl” (among others). Deborah is simply stunning sporting a new look of blonde hair for the role. Bruce Campbell, who we all know too well, makes an early appearance as Van Helsing, a noted vampire killer who has found his way to Purgatory in pursuit of extinguishing the vampire coven. 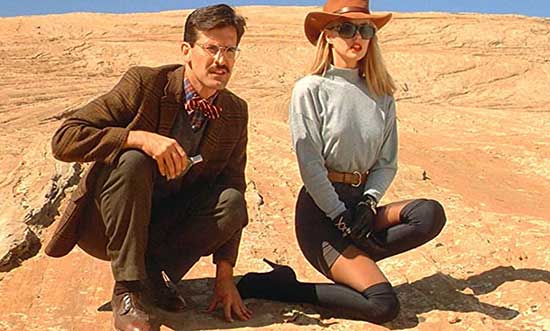 The movie centers on the rising tension that has been simmering under the surface of vampires who are not exactly happy with the life progressions that Mardulak have set into motion for them. This opens the door for antagonist Shane (Maxwell Caulfield) to invoke a counter following who prefer the old ways of doing things, namely killing humans for food.

Comedic highlights include 3 older vampires who act as gatekeepers into the town while watching the sun go down everyday in front of their “somewhat” functioning gas station.

I myself, had never rented this one back in the days, but was intrigued once I saw the trailer. It was great see Deborah Foreman in a role that didn’t center so much on romantic comedies and of course actor David Carradine is as cool as ever. “Sundown: The Vampire in Retreat” has many elements associated with what we night usually call a bad B-film. However, I tend to disagree citing it more as a silly but still great vampire campy romp of a movie.

This latest release brings Sundown: The Vampire in Retreat to bluray after a long wait in archives from the team at Vestron Pictures. While it may not warrant greater notoriety from some of the more noted popular vampire films of that era, it still fits nicely next to films like “Vamp” and “Fright Night” as a vampire film with style. In short, its charming, quirky and worth a watch!

Sundown: The Vampire In Retreat is now available as a blu ray release from Vestron Pictures