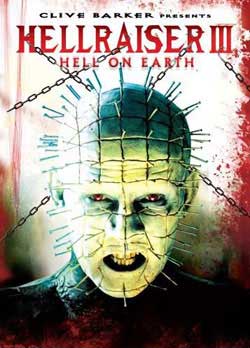 When J.P. (Kevin Bernhardt), a playboy club owner, buys a mysterious-looking puzzle box and mistakes it for a work of art, he has no idea that Pinhead, “the Black Pope of Hell” (Doug Bradley), is trapped inside. Playing tricks on his captor’s mind, Pinhead tries his best to manipulate J.P. into breaking him out of his prison — that is, until an astute journalist (Terry Farrell) begins to suspect something.

Sequels are often looked upon as the bastard progeny of cinema in general, but it seems that only in horror is it deemed ok for a really good film (and in some cases, a really bad film) to spawn sequels, because the people making decisions seem to think that if the first film was successful then surely pumping out more will make them (the film company) more money.

And the big wigs are right. Why else do we have ten “Friday the 13th” films or seven “Nightmare on Elm Street” films. Or five (so far) “Saw” films? Not because the sequels have been that good, but because horror fans will pack theaters to see the latest exploits of their favorite cinema bad guy. 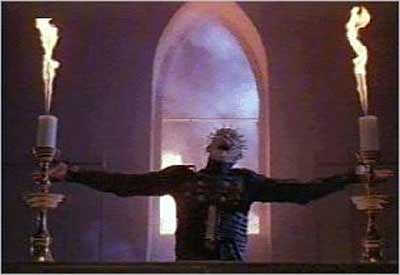 However, the biggest problem that the sequel faces is simply that, being a sequel. The second film in any horror series is a tough sell, because if the first film was good, then you don’t want to f*ck up the second film, because that will kill your possible franchise. 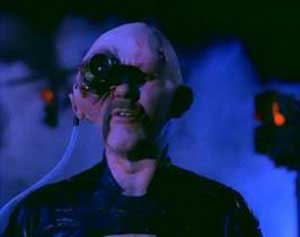 But if the second film survives then we’re off to the races with the three-qual. And yes I’m well aware that “Three-qual” isn’t a real word, but if some bastard can coin the phrase “Torture P*rn” when talking about exploitation movies, then damn it, I can make up words too!

“Hell on Earth” picks up sometime after the events of the second film, when we are introduced to a young, swaggering asshole named J.P Monroe who purchases the “Pillar of Souls” that was briefly shown at the end of “Hellbound” from a random homeless man in an art gallery. Pinhead and the box are trapped within the pillar, and while as a piece of art, it’s quite exquisite, it’s not exactly something you’d really want in your living room.

Next, we are introduced to a young reporter named Joey Summerskill (played by Terry Farrell) who’s desperate to make her big break as an anchor woman. And wouldn’t you know it, she’s about to get her chance as her original story at the local hospital turns out to be a bust, a young man is rushed in and then torn apart by chains. Where the hell is the camera guy when you need him! 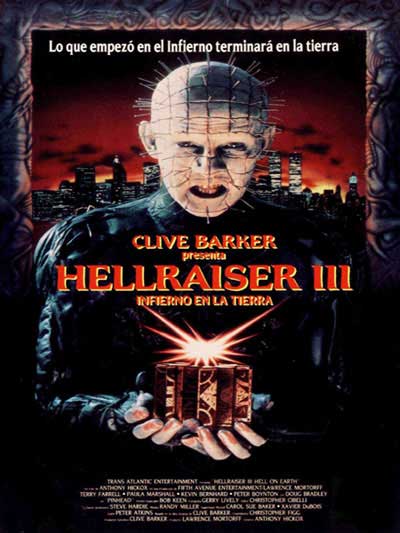 Oh right, he got called off to do something more important.

Joey knows that this story is going to be her big break, and after briefly meeting a young woman named Terri, who came to the hospital with the very dead young man, Joey is on the case to figure out what in the hell just happened.

Her search begins at J.P Monroe’s night club “The Boiler Room” which looks like it might be a Goth/industrial style club, with weird decorations that are heavy on barbed wire and latex, but most of the crowd is made up of people who look like your average nightclub clientele and a few people who look like metal fans, leaving me thoroughly confused as to what in the f*ck they were trying to get across with this club.

Anyway, Joey is doing the reporter thing and is trying to track down Terri, who eventually finds her and explains what happened to the young man and then introduces Joey to the “Lament Configuration”. 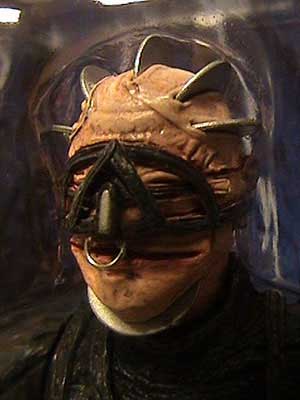 And to further drive home the fact that J.P is a douche bag of epic proportions, we see him pick up a big breasted blonde from his own bar, then after having sex with her, tells her to get the f*ck out, and then accidentally feeds her to the pillar that he’s got on display in his apartment within the club.

Pinhead feeling a bit revitalized after the snack of blonde bimbo starts offering J.P power and influence in Hell if he will bring more victims.

It’s around this time that Joey starts dreaming about her dead father, and then out of left field has a dream where she’s in a World War I trench. And by golly who might that dapper fellow down at the other end of the trench be? Why it’s Captain Elliot Spencer, old Pinhead himself before he was changed.

This sets up a whole side plot and the explanation that since Captain Spencer’s soul was freed in the last film, Pinhead is now his own being and he is now pure evil. But he’s still stuck in the pillar so it’s all good right?

Well, one would think so, but J.P decides the best way to try and get his next victim for the pillar is to simply get a hold of Terri, his ex girlfriend who’s been staying with Joey.

Of course, J.P gets what’s coming to him and Pinhead is unleashed on the club. But he still has to get the Lament Configuration, but he can’t just take it, the box has to be given to him.

At some point in all this madness, Spencer tells Joey that she has to bring Pinhead into Captain Spencer’s realm so that he can do battle with him.

Now, I know you’re probably wondering about what happens when Pinhead is unleashed into the club right? Bloody carnage and sadly the beginning of a tradition carried on in “Bloodline” of making stupid Cenobites.

So who does Pinhead create to help him get the box? Well Joey’s camera man gets turned into the “Camera Head” Cenobite, the club’s DJ gets turned into the “CD” Cenobite, which trust me, is just as stupid as it sounds, including the god awful whirring sound he makes every time he throws a CD, “Atkins” the bar tender who blows fire, because in all of one scene he’s shown with a drink that’s briefly on fire, JP becomes “Piston head” and poor Terri becomes the “Cigarette Smoking” Cenobite.

I’ll give them credit where it’s due, because the designs for these cenobites isn’t really bad, but having not one, but three of the Cenobites (Camera Head, Piston Head, and Terri) spew one-liners gets obnoxious fast.

And as silly as the CD Cenobite is, I kind love him, because he’s just so f*cking stupid that you really can’t do much but scratch your head and wonder “Who the hell thought this was a good idea?” CD gets points for being so bad he’s kinda good.

So does Joey manage to end the horror and save the world from Pinhead and his menagerie of crappy Cenobites? Does Captain Spencer have a big climactic battle with Pinhead? Did anyone think that throwing a bunch of needless explosions into this movie was going to cover up the fact that the Cenobites were bad?

Of course, Joey succeeds in defeating the Cenobites, as she somehow manages to unlock the box and send them all back to Hell, Captain Spencer’s great plan for defeating Pinhead is to simply rejoin him, which when you think about it, is a horrible plan, because his soul was free and instead of enjoying his freedom, the dumb bastard just re-imprisons himself within Pinhead.

Of course, Joey’s own plan for making sure the “Lament Configuration” is never found isn’t much better, as it just leads to the box using its power to influence it’s surroundings, which leads into part of “Hellraiser:Bloodlines”.

The acting in this film isn’t bad, but it’s unfortunately the first in the series to start a couple of terrible trends that were continued in part four (Crappy Cenobites and Pinhead’s voice not being deepened with effects) and over all the story just feels like they were trying to turn Pinhead into a generic slasher villain and not the mostly silent villain he was in the first two films.

Another thing that bugged me about this film was that the twisted vein of sexuality and the grotesque was missing. In the previous two films without having any sex scenes, there was a very obvious theme of sexuality and the grotesque, first with Frank and Julia in “Hellraiser” and then Julia and Dr. Channard in “Hellbound”. In this one, we’re treated to a crap love scene with J.P and the blonde bimbo who eventually gets killed by the pillar and despite some crafty cutting to imply that Pinhead is using his influence on J.P from within the pillar, the sex scene still falls flat and comes across as a cheap chance to show some nudity for its own sake.

I can’t award this film the title of “Worst Hellraiser Ever” because at the moment, that title is held by “Hellraiser IV” but I can say that you shouldn’t go in expecting too much out of this movie. If you think you’re going to be getting a quality continuation of the series like “Hellbound” you are sadly mistaken.

Straight up, this is a bad movie. Not “Sweet Jesus make it stop!” bad, but bad in the sense that you gather a group of friends, a case of beer and pizza and you don’t take it too seriously.