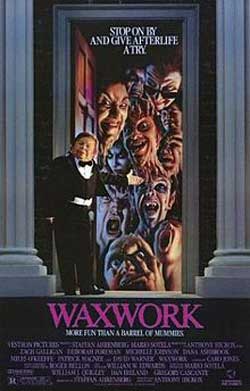 Come one, come all to the mysterious waxwork museum that’s come to town! A special showing will be taking place at midnight tonight and you are invited! Just remember, you can step inside the hall of horrors but can you pay the price…?

A crazy mash-up of quite a few horror classics linked together by a story that puts them all under one roof, Director Anthony Hickox hits a solid double with “Waxwork“. But for a few minutes that could’ve been trimmed and some obviously human “Wax” dummies this could’ve been a triple! But while imperfect it is interesting and ultimately satisfying.

A Waxwork museum appears overnight in the middle of town and the local snotty rich kids decide to sneak in after dark to see what’s what. After being caught by the caretaker (David Warner) & his pint sized henchman, Hans (Michu Meszaros) they begin to look around at the exhibits. Neither the caretaker or his pal seem to mind too much. They find wax figures of just about every classic Hollywood monster imaginable and quite a few real monsters that have plagued mankind over the ages (Jack The Ripper, Marquis DeSade among others). But here’s the catch: Each of the displays is in fact a portal into whatever world you’re looking at! And it’s all too easy to fall into a display and find yourself in say…Transylvania inside of Dracula’s castle. Making matters worse, if you die in one of these alternate worlds then you’re dead in the real world too and become part of the exhibit at the museum. Of course it ain’t all that easy getting out either. 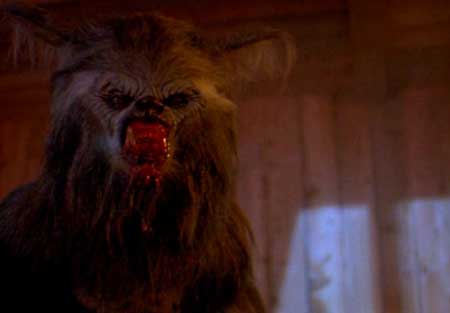 Zach Galligan (“Gremlins”, “Gremlins 2: The New Batch”) stars as Mark and familiar faces in the crowd include Dana Ashbrook (“Twin Peaks”), Deborah Foreman (“April Fools Day”) & Michelle Johnson (“Dr. Giggles”). All familiar faces and although they are about the oldest looking high school kids in cinematic history, they know what they need to bring to the table and do it well. Once inside they all end up in different portals and some manage to make their way through while some…don’t. Among the creatures they tussle with you’ll find Dracula, The Mummy, The Werewolf, The Marquis De Sade, Zombies & others. You might recognize Miles O’Keefe (“Tarzan, The Ape Man”) as Dracula. 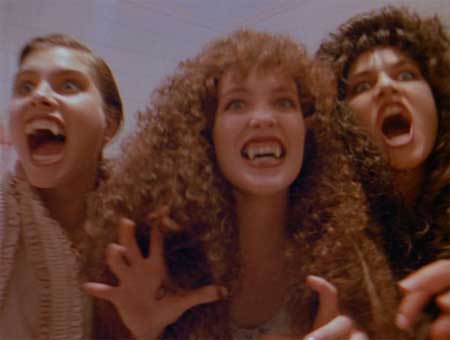 There is a good dollop of humor to be found amongst all of the horror here as well. Hickox’ script is wise to the audience the film is intended for (Teens)! and it offers some silliness to offset some of the more extreme bloodletting. And when I say extreme I mean extreme! The film was cut by the MPAA because of some of the more extreme scenes of carnage. The entire “Dracula’s Castle” scenario ladles gallons of grue onto the actors. It’s actually a bit much even in the edited version (Although the cuts are very easy to see). It’s still a engagingly brutal & gory film. Heads are crushed, legs are eaten, necks are ripped out & guts are chewed on all in glorious bright red. I daresay this film would be rated NC-17 in it’s EDITED version if it was released today…that’s how bloody it gets. 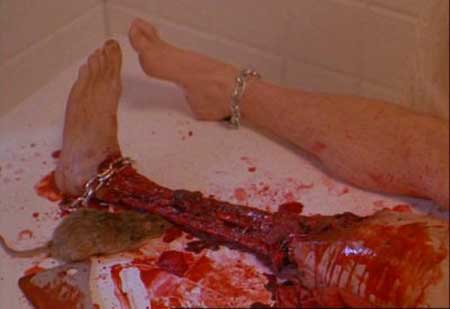 But as is often the case when you see blood splattered all over the place, the story fails to justify the reason why the red stuff is all over. Although it is a engaging story it really doesn’t make a whole lot of sense. Patrick Macnee appears late in the film as Sir Wilfred and his purpose is to try to explain why all of this is going on and to put a stop to all of it but the explanation sounds like more of an afterthought than an actual rationale, it’s got something about the caretaker needing victims in order to unleash the monsters into our world to wreak havoc and chew on legs basically but the whole thing feels forced into the storyline as if it was come up with at the last second and inserted into the script at the last second. 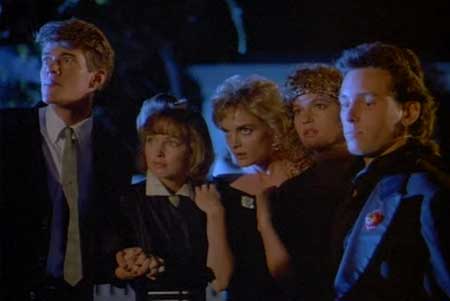 None of this means that it isn’t a lot of fun though! Warner & Macnee have an especially good time making fun of themselves and the proceedings as Galligan & company do their best to save the Earth. In the climax, when all the wax figures come to life, you’ll notice a lot of characters you didn’t see earlier rummaging about. There’s even a homage to Corman’s “Little Shoppe Of Horrors” which while corny, is still good for a chuckle. I think I noticed a bit of recycling in the climax as well. I’m almost positive one of the creatures is the dreaded “Human Venus Fly Trap” that was the centerpiece of a good little film called “The Mutations” (1974), don’t quote me on that though.

Anthony Hickox is the son of Douglas Hickox who directed “Zulu Dawn”(1979), “Brannigan” (1975) and one of my all time favorites “Theater Of Blood” (1973) which featured an Oscar worthy performance from the legendary Vincent Price. It’s apparent that the apple didn’t roll far from the tree since Anthony is also responsible for directing movies like “Warlock: The Armageddon” & “Full Eclipse (Both 1993), “Sundown: The Vampire In Retreat” (1989), The last good Hellraiser movie,”Hellraiser 3: Hell On Earth” (1992) & whaddaya know…”Waxwork 2: Lost In Time” (Also in 1992). “Full Eclipse” is an especially good movie about a group of policemen who are werewolves that you should catch if you see it playing on cable. 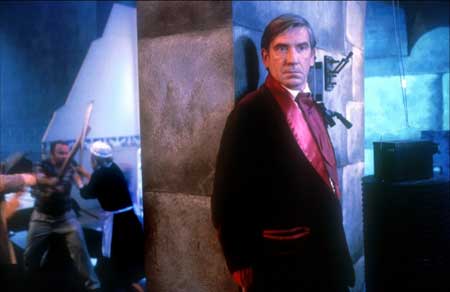 “Waxwork“, as you now know, leaves itself open for a sequel and what a sequel it is! If you thought it couldn’t get any nuttier, trust me it does! But that’s for the next time we meet up acolytes so go out and find yourself a copy of this to watch and just ignore the story and watch the blood drip off of your friggin’ TV screen!