Just three years ago writer-director Adam Green exploded into the consciousness of horror movie fans worldwide with his in your face, no holds barred, old school gorefest of a slasher movie, Hatchet. Critically hailed at the time as “the greatest slasher film in 20 years” the film introduced the world to “the next icon of horror” in the form of villain and anti-hero Victor Crowley, played by horror legend Kane Hodder (the man behind the Jason Voorhees mask in the Friday the 13th movies) and, as the young Victor, actress Rileah Vanderbilt (today, Green’s real-life wife). He swiftly followed that up with the more cerebral, psychological thriller Spiral, which he co-directed with Hatchet and Avatar star Joel Moore and which starred Moore alongside Amber Tamblyn (127 Hours; Joan Of Arcadia), Zachary Levi (Chuck) and Tricia Helfer (Battlestar Galactica). 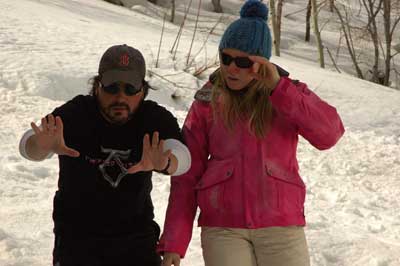 Green’s latest feature, Frozen, is another intense thriller, this time concerning three winter sports enthusiasts who find themselves trapped in a desperate situation that proves to be far more extreme than anything the Winter X Games could possibly offer. We met up with Green on the eve of the film’s UK cinema release to discuss blah blah blah… 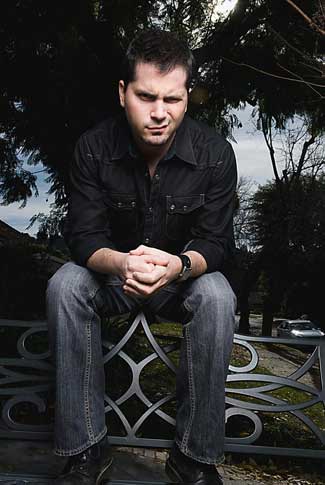 Frozen stars Shawn Ashmore (the X-Men trilogy), Kevin Zegers (Dawn Of The Dead) and Emma Bell (Death In Love; New York City Serenade) as a trio of twenty-somethings – best friends Joe Lynch (Ashmore) and Dan Walker (Zegers), plus Dan’s girlfriend Parker O’Neil (Bell) – hoping to spend some quality time skiing and snowboarding in the picturesque resort of Mount Holliston. But a typical day on the slopes turns into a chilling nightmare when they find themselves unexpectedly stranded on a chairlift shortly after the ski resort closes for the week. Unknowingly left dangling high above the ground and with no apparent safe way down as night begins to set in, with increasing panic they soon realize that the threats of frostbite and hypothermia are the least of their worries.

The initial idea for Frozen was borne out of Green’s memories of East Coast ski resorts and their ‘temperamental’ chairlifts. “I used to go skiing in the Boston, Massachusetts area where the mountains are only open Friday through Sunday because they just don’t have the business to stay open during the week,” he recalls. “Every time you go on the chairlift – and any skier knows this – the chair always stops for no reason and eventually it starts again but everybody starts thinking, ‘How would I get down from here if this thing doesn’t start again?’ And skiing on a Sunday night and having the chair stop, you’re thinking, ‘They know I’m still up here, right?’ One morning I was watching the news in Los Angeles and they were doing the weather report and the background image was Big Bear Mountain ski resort. You could just see the chairs swaying in the wind at seven in the morning and I was thinking, ‘Oh, yeah, the mountain’s closed right now. They used to be closed when I…’ and it just all sort of came together. The stupid part was that I said, ‘This is going to be the easiest thing ever. It’s three people in a chair. This’ll be simple.’ The only thing that was harder than this was probably March Of The Penguins in terms of suffering and what people went through.” 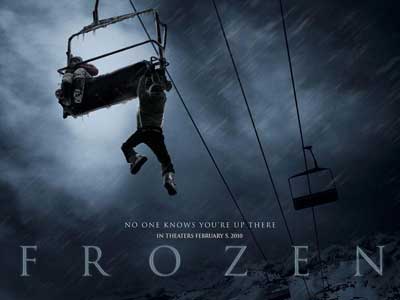 Although the film’s simple but original and very effective premise is one that easily taps into an audience’s very real and primal fears – fear of the dark, of being trapped, being alone, and the possibility of dying a slow, painful death – it also meant that the majority of the film’s running time would, by necessity, have to be spent focused on three individuals “sitting in a chair” talking. Endeavouring to maintain the audience’s attention must surely have been the source of much apprehension and concern to Green when sitting down to write the script.

“Absolutely,” he admits. “When I first had the idea I said, ‘Okay, it’s a great idea but maybe it’s a short.’ But then when you start going through the process of what would you do, emotionally it’s such a journey, from the moment the lightsgo out. Obviously you’re scared, but you would also be, ‘Are you kidding me right now? They have to turn the lights back on. They’ve got to know we’re up here.’ Then there’s the realisation that nobody’s coming and you’re stuck there for five days, trying to prepare yourself psychologically to do something that you know is going to hurt or to let somebody else do something whereby they’re going to hurt themselves. It’s so rich with things to keep it alive. I know some people are surprised when they see the movie that it was able to sustain the suspense for 90 minutes, but once you see it you realise it could probably have been a little bit longer.” 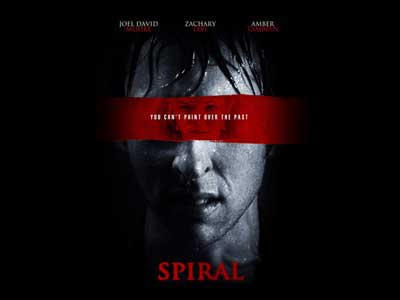 One of Frozen’s greatest strengths in helping to establish the threat to the main characters and to maintain the suspense, the helplessness and the sense of dread is the location work, which adds a strong element of reality to the proceedings; something not usually seen in this type of movie. So how much of the film was shot on location in relation to the studio?

“The whole thing. No studio shots, no anything,” says Green. “I had to do my whole Adam Green ‘all practical, no CGI, no whatever.’ That was stupid but it made the difference at the end of the day. I think when you watch the movie you don’t feel safe. You can tell that they are really up there. If it was a green screen I think audiences would know. The ‘making of’ that will be on the DVD when it comes out – and I stand by this – it’s the best Special Feature put on a movie ever. Ninety minutes, documentary style. It’s not the typical EPK where it’s just the actors and clips from the movie. It’s very crew-centric and it shows how we did everything and what we went through to do it.” 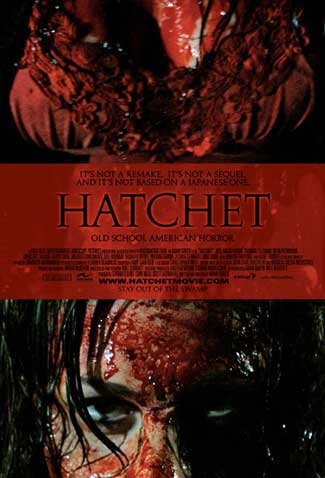 Watching Adam Green’s movies, it’s not too difficult to guess the names of a couple of esteemed film directors who have had a marked influence on him as a filmmaker. Spiral was hailed by critics as “the closest thing to Hitchcock you’ll get in this day and age” while Frozen has been described as “in the tradition of Spielberg” and as likely to “do for skiing what Jaws did for swimming” (Green also readily admits that E.T. – The Extra-Terrestrial is his favourite movie of all time).

“Yeah, Hitchcock and Spielberg are the two biggest [influences] and for Frozen, especially, Jaws and Lifeboat were the two movies that I turned to for things to aspire to,” he confirms. “I think Jaws is a perfect film – that whole man versus nature thing. I really looked into how Spielberg made the movie. With Jaws Spielberg would bring the three actors on to the boat and they would run the scene, find it, figure out the beats and the emotions and then he would place the camera. That’s what I did with Frozen. You get a more realistic and organic performance. That’s why Jaws was so successful. We all know that the shark didn’t necessarily look all that real but it doesn’t matter. At least I have real wolves [in Frozen], so I’m very excited about that [laughs].”

So, apart from the idea of being trapped a hundred feet in the air on a chairlift for several days in the middle of winter, what else scares the man who is being tipped as one of the new masters of cinematic horror and suspense?

“Planes,” admits Green. “I’m not good on flights. I’m terrified the whole time, which means I’ve got the wrong career. I can’t tell you what I go through when I come to London each summer for Frightfest. The flight’s the scariest part of the festival. I’m scared of bees. I’m scared of ignorance, especially the things that I read on the internet. I always give people the benefit of the doubt but if you go on to, like, the IMDb message boards, where somebody said ‘is where intelligent conversation goes to die’, I can’t believe that people say the things they say. I think there’s this new found bravery where they’re like, ‘I’m anonymous so I’m going to say…’ The things they say because they can be anonymous… I mean the racist… It’s just awful. That’s starting to scare me. The other thing that’s scaring me is the lack of creativity in cinema. Hollywood used to want to find what’s next. They wanted to find the new thing. They are terrified of a new thing now. They even tell you, point blank, ‘We don’t want something new. We need something that we know works because our jobs are on the line.’ I’m scared of where the industry is going. I’m doing my part but the fans are not doing theirs. They complain about the remakes but they support every single one of them. When an original movie comes out they are nowhere to be found. I’m very excited that The Last Exorcism opened the way it did. Whether people like the movie or not, it was an original title and it did well and that’s a good sign.”

With Frozen about to be released in cinemas and with Hatchet II already complete and currently scheduled for release in October, the future is looking very bright for Adam Green. But how do you follow up such a double-whammy of horror.

“The next project is called Killer Pizza,” he reveals. “It’s a kind of a Goonies/Monster Squad children’s adventure-horror movie based on a children’s book [by Greg Taylor]. I’m doing it with Chris Columbus who, of course, wrote The Goonies and Gremlins and I could not be more excited. I’ve waited and waited for the right studio movie and this one is it.”