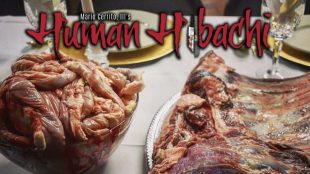 Human Hibachi synopsis:
A man documents his girlfriend’s 35th birthday on his phone. What he captures throughout the night are the most disturbing human acts imaginable.

TROMA NOW service is a chaotic mix of lost 80s schlock and modern no-budget films, making exploring it quite a gamble.

Filmmaker, Mario Cerrito will continue the storyline with the sequel, Human Hibachi 2 “Feast in the Forest” set to film later this year. He is also busy at work with the upcoming production of The House In The Pines.