Mick Strawn and Jeremy Brown are teaming up to direct the new horror film, “The House In The Pines”. They are coming off the success of Friday the 13th Vengeance with lots of momentum, an amazing 1.2 million views !

Jeremy directed Vengeance while Mick served as assistant director and production designer. The work of Mick Strawn can also be seen on many horror classics from film and television. Those works of horror include: Blade, Freddy’s Nightmares, Leatherface – Texas Chainsaw Massacre III, The Hidden, and Nightmare of Elm Street – The Dream Master.

“Directing this film is a nightmare come true for me!” – Mick Strawn

Remember the days of perusing the horror section at your local mom and pop video store just to find that diamond of the rough. ‘The House In The Pines’ is that 1980’s memory that you’ve been looking to find for decades… but it’s much, much more.

“Having someone like Mick Strawn come on this film as the director speaks volumes. Mick has done work on the biggest horror films in history. Also, with the chemistry Co-Director Jeremy Brown and Mick possessed on Vengeance, I can only imagine how great it’s going to be on this movie.” – Writer / Producer Mario Cerrito 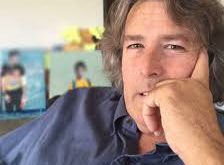