Why Do Zombies Crave Human Flesh?

Why Do Zombies Crave Human Flesh? 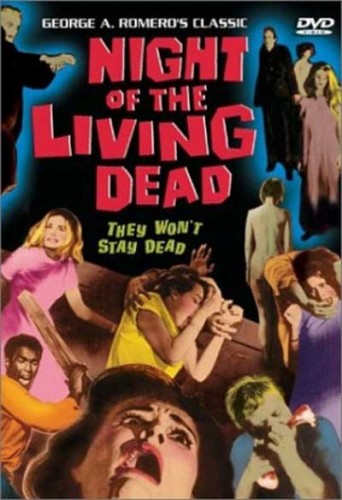 One of the most chilling scenes in George Romero’s immortal Night of the Living Dead (1968) occurs in the climax – after a botched escape attempt, lovers Tom and Judy die in an explosion. When the smoke clears, a mob of zombies attacks the couple’s remains, each tearing off a piece for themselves. The creatures then begin their macabre feast on a nearby lawn, voraciously devouring human flesh and entrails. They eat with a singularity of purpose, knowing full well that the hunger will return as soon as their meal ends.

The hunger for human flesh is a defining aspect of modern zombies. In living beings, the sensation of hunger is a reaction to several stimuli: the sight or smell of food, the lack of certain nutrients, and an empty stomach, to name a few. This sends a signal to the hypothalamus to produce ghrelin, considered by many scientists to be the “hunger hormone”. With ghrelin acting upon the brain, living creatures feel the need to eat, which in turn helps replenish any lost bodily cells and fuels the metabolism.

Zombies, however, aren’t living beings and so the same eating mechanisms don’t necessarily apply to them. It’s certainly strange that a dead human being wants nothing more than to perform a function it once needed to live. Why is it, then, that the living dead have an all-consuming urge to consume us?

Typical zombie behavior suggests that zombie bodies aren’t entirely dead. There are three key points to the “living” part of the term “living dead”: mobility, purposeful action, and biological activity. Mobility refers to the ability for zombies to walk among the living and to attack them. 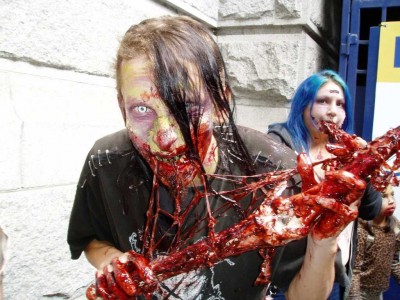 Purposeful action, on the other hand, is based on the observation that zombies, when animated, don’t go about doing random things – they move to hunt, kill and devour humans. Biological activity pertains to the different physiological processes that enable the previous two points.

A zombie, for example, clearly has some functionality in the hypothalamus. Otherwise, no ghrelin would be produced and the hunger drive is nonexistent. The medulla, which controls a bevy of involuntary movements, is also somewhat functional. Zombies groan, indicating that they breathe. Their veins pump blood, otherwise rigor mortis (the stiffening of dead muscle tissue), would make it impossible for them to move. Peristalsis, the reflexive muscle movement that pushes food down the throat, enables them to swallow chewed-up human brains. Parts of the brain that control innervation and ennervation of muscle tissues also work, allowing zombies to move, kill and devour. This explains why shooting a zombie in the head appears to be the most effective way of “killing” it; without a brain, they simply cannot function.

It should be noted, however, that while biological processes in zombies are at a functioning capacity, they are severely limited. Although they have enough mental ability to recognize hunger and the means to address it, higher cognitive processes such as logical thinking and speech are far from normal levels. Their circulatory systems are strong enough to stave off rigor mortis, but only to the point where zombies are able to shamble instead of walking at a living human’s pace. The nervous system is capable of allowing the body to move, see and hear, but other sensations like pain are dulled if not absent altogether. 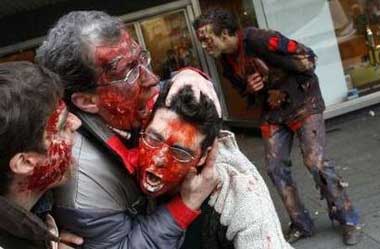 What all this suggests is that a zombie is a highly-efficient organism, operating at the absolute baseline of functionality needed to “live”. They cut off all normal living functions, save for what is necessary to live: nutrition and the means to achieve it.

In this regard, it is easy to see why zombies seem to want nothing more than to knock us down and feast on our bodies. If the only thing on their minds is simply existing, then there is nothing else they need to do than eat us. Why is it, though, that they choose human beings as their favored prey, and why do they never seem to stop?

It is highly possible that the hypothalamus also experiences limited function in zombies. While it is capable of producing ghrelin to induce hunger, a zombie’s hypothalamus might not be able to produce leptin, the hormone that cancels out the effects of ghrelin. Without leptin to counteract the ghrelin, zombies are constantly hungry, the urge of tear us apart and eat us growing stronger and stronger as time passes. They may also get some relief from the hunger pains as live flesh may contain enough leptin to subside their hunger pains, cravings and need to feed.  Since their body is in a constant decay stage, they  become drug  addicts, craving their next of leptin.

Another theory as to why zombies experience such a high degree of hunger is that zombies continuously decay throughout their unnatural existence. In order to prevent themselves from withering away completely, they need a constant supply of nutrients to replace their dying cells. The replenished cells can only last so long until they begin to decay themselves, and so zombies need to go on a nonstop eating rampage to continue their undeath.

Whatever the reason for their unending hunger, there is no denying that their meal of choice is living human flesh. This may be tied to the fact that zombies, in essence, are extremely efficient beings; rather than go through the hoops of normal nutrition, they will choose to eat the matter they can absorb most easily: their own DNA. In order to replenish their dying human cells, they consume and absorb healthier human cells. This includes flesh, guts, and even brains.

This may also explain why zombies do not eat their own kind – it is simply inefficient to replace dying cells with dying cells. A creature in the advanced stages of decay cannot possibly benefit from consuming what is already decaying to begin with. Instead of eating what’s rotten, then, zombies will go after the freshest meat possible –flesh torn straight off of a living person.

We may never fully understand why zombies have such a powerful urge to eat human flesh and brains. Based on their behavior, and our own understanding of the human body, we can at least catch a glimpse of the mechanisms behind the madness. Just remember, however, that understanding a zombie better won’t stop it from pinning you down and ripping a bloody piece of your neck off with its rotting teeth.