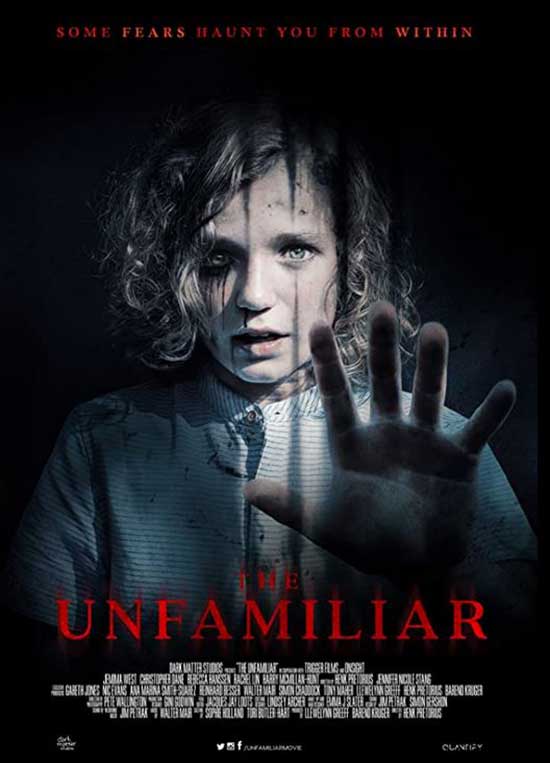 A British doctor comes back from military service convinced that her PTSD symptoms are supernatural in nature.

The Unfamiliar (2020) is both a horror film that looks good and a massive disappointment. The story follows a woman who returns from combat to her husband and children only to begin experiencing visions of supernatural events. Convinced she’s suffering from PTSD-related hallucinations, she let’s her husband cajole her into taking the family from England to Hawaii, where spirits wait to take over her body. Despite having nice camera work, a solid cast, and a couple of legitimately well-done spooky scenes, The Unfamiliar’s script is so ridiculously rife with illogical moments, unmotivated emotions, and convoluted story points, that it serves only to make the viewer angry rather than satisfied.

In the lead role of doctor-turned-soldier Izzy is Jemima West (The Mortal Instruments: City of Bones 2013), and Christopher Dane (Ren series 2016) plays husband Ethan. They have a baby, a teen daughter Emma (Rebecca Hanssen, Lore series 2018) and a young son Tommy (Harry McMillan-Hunt in his feature debut). Rachel Lin (EastEnders series 2019) plays the Hawaiian mystic that appears right at the film’s climax to “hand-of-god” the situation into a clunky resolution.

The cast is not to blame for this catastrophe, as West plays the lead much like a cold military woman might be expected to act. Dane plays the warm foil well, and Hanssen—for all her limited screen time—plays a busy teen easily enough. Perhaps the weakest portrayal comes from Lin’s Auntie Mae, though it’s completely possible this is wholly due to the abhorrent script. Conversely, McMillan-Hunt does stellar in his debut, depicting a timid kid believably, and then switching on a dime to another personality when possessed.

Helming the director’s chair is Henk Pretorius (Leading Lady 2014), who also penned the script with Jennifer Nicole Stang in her feature scripting debut. Who is most to blame between the two for this disaster of a tale is anyone’s guess, but the script’s problems are so apparent in nearly every scene that my money is on both of them. Unnecessary characters and scenes abound, and there’s a baby that simply doesn’t exist sometimes, while other times it is merely passed off camera like a loaf of stale bread. In addition, Izzy’s character is written as a terrible mother and is thus unnecessarily unlikable. She shakes her young boy in a rage, treats her stepdaughter as only her husband’s child, and refuses to accept that she might be experiencing post-traumatic-stress symptoms essentially because “she’s strong.”

Did you also catch all of the convoluted story complications I just mentioned? Yes, Izzy is a doctor who turned into a soldier; yes, she came back form combat with scars; yes, her husband had a child presumably from a prior relationship; yes, they start in England and then spend the last 20 minutes of the film in Hawaii. What do all of these things have in common? They are absolutely, 100% inconsequential to the plot. There’s more that doesn’t matter but is still shoehorned in, such as the fact that Izzy is a mechanic of sorts with her own big workshop, and that her husband is an anthropology professor who suddenly wants to write a children’s book, and the list goes on. No one edited this script, and no one checked for confusing plot holes. An example of the latter is [spoiler, I guess] the reveal that Izzy’s real family was trying to keep her from going to Hawaii by scaring her out of her own home. That doesn’t make sense, you say? Well, you should’ve told the script team before they filmed this mess.

All of these script problems, however, pale in comparison to the ridiculous treatment of Hawaii. Islands so rich with native lore are ripe for exploration in horror movies, and tikis are a staple of vintage scary flicks (including some of my favorites). However, the connection to Hawaii in this film is almost non-existent, and the only person of color we see sacrifices herself without reason to save “the white people.” No, that’s not a quote from the film, but it might as well be. It’s a monstrosity of an ending, and makes no one look good. 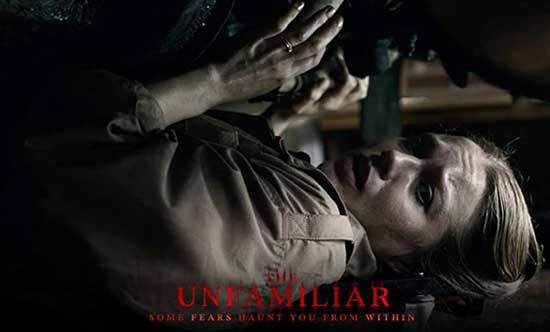 Ultimately, it’s very hard to appreciate the occasional neat camera work and enjoy capable actors employing their craft when the script is so problematic. Between the missing baby, bad parenting, logic failures, and antiquated white-superiority vibes, The Unfamiliar deserves to stay unfamiliar to audiences everywhere. Back to the drawing board, folks.