A little girl is brutally slain by a vampire in a tiny 19th century Austrian village. Seeking revenge, the townspeople invade the foreboding castle of Count Mitterhaus and kill him for the crime. As the Count dies, he curses the villagers and vows that their children will all die so that he may someday return to life.Fifteen years later, as the village is ravaged by the plague, a traveling circus comes to town and distracts the villagers from their current hardships. Little do they know that their troubles are only beginning! The circus is actually a troupe of shape-shifting vampires and, as the local children start disappearing, they realize the prophecy of the long dead Count is coming true.

Synapse Films is proud to present VAMPIRE CIRCUS, now available for the first time on home video in glorious 1080p high-definition and loaded with amazing extras you can really sink your teeth into! 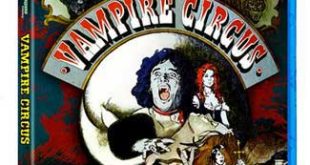