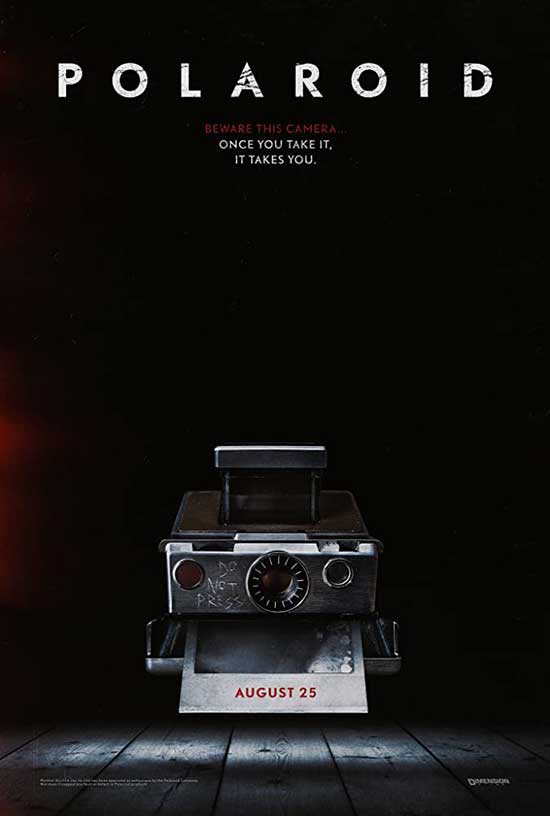 High school loner Bird Fitcher has no idea what dark secrets are tied to the Polaroid camera she finds. It doesn’t take long to discover that those who have their picture taken with it, soon die.

Short movies from fledgling directors can sometimes offer an interesting glimpse as to who the next upcoming names to watch will be. After all, such luminaries as George Lucas, Tim Burton, David Lynch and Paul Thomas Anderson began their careers with shorts which got them noticed and on the path to legendary status. Short films seem to lend themselves readily to the horror genre – without the need for tons of exposition or character development it’s often a case of getting straight down to the gore; and over recent years there have been many instances of new horror directors getting the chance to remake their own shorts with bigger budgets and feature-length running times.

One such recent remake is Polaroid, from Norwegian director Lars Klevberg, based on his 2015 short of the same name (Klevberg has since gone on to direct the Child’s Play reboot of 2019). While given a short theatrical release in 2019 – before making the jump to Netflix – the movie was actually shot during 2017 and left on hold while distribution was sorted out.

The plot of the full-length Polaroid is much the same as the original short; the movie opens with a teenage girl going through a box of her late mother’s possessions with her friend (not the most fun play date ever but hey) before finding a hipster’s dream in the shape of a very rare vintage SX-70 Polaroid camera. Sarah’s pal takes a shot of Sarah in her underwear – because – before leaving her alone in the house: big mistake, as it quickly becomes clear that there’s something else in there with her. And wouldn’t you know it, it has something to do with the old camera – strange smudges start to show up on the newly developed photograph, and it sounds like there’s something in the attic….

All this takes place in a (fairly lengthy) pre-credits sequence which doesn’t end well for Sarah. We’re soon introduced to shy high school student Bird Fitcher (Kathryn Prescott). While working at her part-time job in an antiques store, her pal Tyler (Connor Bell) drops by to give her a gift in the shape of – you guessed it – a rare SX-70 Polaroid camera. We find out that the camera has the letters ‘RJS’ etched into it, before Bird takes a snap of Tyler – again, those weird smudges soon show up on the photo; and Bird’s dog is none too keen on having his picture taken with her new toy. 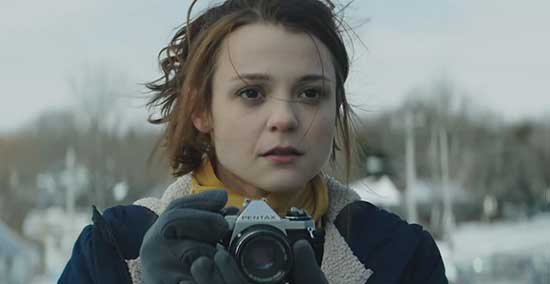 Later on that evening Bird joins her best pal Kasey (Samantha Logan) at a costume party with all of their friends – new camera naturally in tow – and while they’re having fun taking group photos of themselves, poor old Tyler has a run-in back at the antiques store with something rather unfriendly. It soon becomes clear that having your picture taken with the cursed SX-70 marks you for death in some way, at the hands of a mysterious creature; Bird soon finds herself in a desperate fight for her life.

Polaroid has a few things in its favour; it’s very attractively shot – if a bit on the dark side at times – with some great framing and good use of the atmospheric locations. The sound design is good too, in particular the pained sigh that announces the presence of the evil entity linked to the camera. And from a writing point of view it’s nice to see a film for once where the authorities actually take the brutal slaying of several high school students in a single night seriously, rather than the usual “aw shucks, you darn kids!” treatment we often see in these kind of movies. And all the actors involved do a decent if not stellar job of bringing their characters to life (you might recognise genre stalwart Mitch Pileggi in particular, not just from TV shows like The X-Files and Dallas but also his tongue-in-cheek turn as Horace Pinker in Wes Craven’s Shocker). 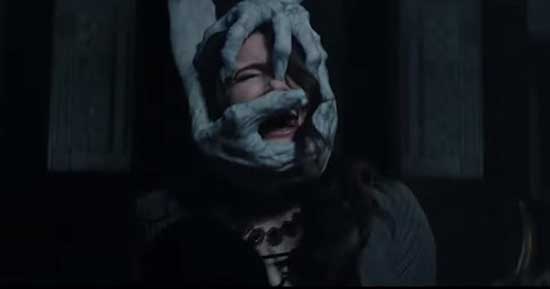 Unfortunately there are several problems with Polaroid too, not least of which is the fact that we’ve seen all of this before in often better films; there’s a sense of deja vu throughout the movie which is hard to shake off. Films like The Eye (not brilliant in itself) and The Ring have covered very similar ground, and Polaroid often finds itself straying into Final Destination territory. And a far creepier film dealt with the long-held belief in the camera as a cursed object, in the shape of 1972’s The Asphyx. This Victorian-era set British oddball had a much more sinister creature too.

Some scenes in Polaroid come off as silly rather than scary, for instance when the kids try to rid themselves of the cursed photographs by setting them alight – and find themselves instead doused with CGI flames; and by the time the ending rolls round the ludicrous plot contrivances start piling up faster than the bodies. But perhaps the biggest sin is that – in order to keep to a PG-13 rating – the movie is devoid of any gore or violence; the kills are largely unseen and bloodless, and scares are of the common-or-garden jump variety. It’s not a movie you’ll actively hate but I’d be shocked if it’s one you’ll love either; it’s a bit too bland for that.