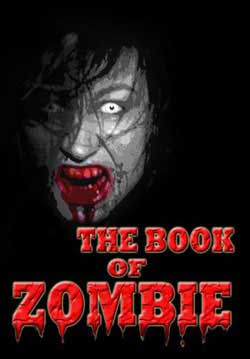 A small, sleepy Utah town gets an undead wake-up call when all of the townspeople of Mormon faith suddenly transform into flesh-eating ghouls!
Now, a group of “non-believers” unaffected by the mysterious epidemic must band together to survive the night and answer the burning question: How do you kill a Mormon zombie?

The Book of Zombie is a horror comedy that has the local mormons arriving as the undead to terrorize and eat the local community.This small Utah community has the locals running, cracking jokes and just trying to stay alive thru it all. The main characters are Brian Ibsen who plays David Driscoll and his girlfriend Jenny King (Larisa Peters). When they arrive at the local quick mart after dodging a few of these things, they run into the occupants Darwin Nedry and Charlie Cooper who provide some of the additional comic relief in the film. Special mention goes out to Elissa Dowling playing Henrietta who is also one of our featured “Vamps”. Brian Ibsen who takes the lead as David, breaks up the terror with some “Ash” inspired lines and some worthy screen entertainment.

Book of zombie was filmed on a extremely low budget but rises above that fact with some really choice filmmaking. The opener title sequence with its polished look of motion graphics and stop animated figures really sets the mood as an opener to this new entry into the current craze of zombies-gone-wild phase of movie making. As per many similar situations, the team of survivors wall them selves up in the quick mart in anticipation of zombie attack. With little on hand they discover that the zombies being mormon have a weakness to pego cola which instantly turns them into mush. A few laughs intertwine as they plan for the inevitable and are visited by a few more warrior type nutbag survivors. Namely one chainsaw swinging Boothe Gardener who seems to have it all worked out. They also come across a knight in armor bartender who works her crossbow like a pro taking out a few more undead with some straight thru the eye shots.

With the town becoming more populated by the undead, a plan of attack goes into effect that includes bombing them with lots of cola. Though when the plan dosent work and Darwin gets bit in the arm, its up to him to save the day as a explosive rigged human cola bomb. What is surprising here is that the zombie makeup and effects all work really well. Kudos to special effects makeup artist Marcel Banks who takes credit for making this one kick ass zombie film. The zombie makeup has that over the top, caked on look that helps bring a certain cartoonsih look to the undead. With blood dripping everywhere and lots of complimentary beheading shots, you really couldn’t tell that they worked on limited funds ($15K as reported).

You can’t help but start to draw in similarities to a barrel of films but zombie lovers will feel right at home and enjoy everything they throw at you. The film credits 3 directors: Paul Cranefield, Scott Kragelund , Erik Van Sant who by any means didn’t rush thru this one as evident in the fine editing, shots and feel of the film. I’ve seen enough of these to know this one wont have long to wait to get picked up and available so keep your eye out for “The Book of Zombie” I believe it’s safe to say that studio backed films have failed miserably in area that this film excels in. Are we ready for more zombies? Well I’ve seen about 10 -15 releases just this year, so there must be a demand for the undead on home entertainment. Over and out!