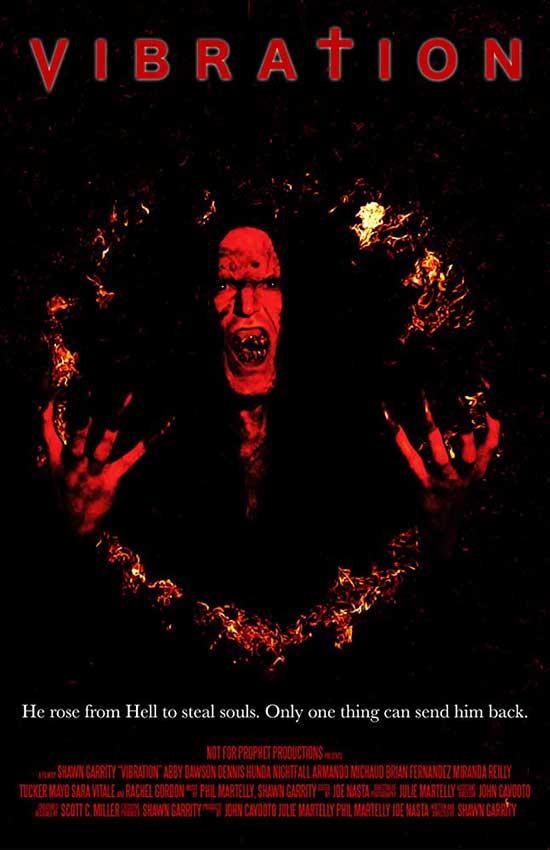 In an effort to communicate with her dead mother, 16-year old Alexis accidentally summons a demon who tries to steal her soul. Does she have what it takes to send him back to Hell?

The trusty Ouija board has been the starting point for many a horror movie, and with good reason; there is something deeply sinister about this seemingly innocuous board’s reputed links to the underworld and its ability to summon all manner of nasties. Even though the reality of these boards (being originally nothing more than a Hasbro parlour game) is more mundane, they have nevertheless given us the creeps on the big screen for decades. One of the latest movies to use the Ouija board is Vibration; it comes to us from writer-director Shawn Garrity.

Clocking in at a lean hour and thirteen minutes, Vibration has a really rather poignant opening scene; intercut with the credits we see stages in the life of a young couple, going from viewing houses together to falling pregnant, to giving birth at home in a bathtub. This intro is beautifully shot, and becomes increasingly threatening as subtle yet unsettling shots that feel ever so slightly out of place begin to appear. Suffice to say there is no happy ending to this short sequence, before we enter the movie proper.

We then meet teenage girl Alexis, who we naturally assume is the baby from the opening scene, as she uses the aforementioned Ouija board to try and contact the spirits. After a somewhat uneventful session with the board, Alexis follows its explicit instruction to go up to the attic – where she is menaced by a sinister black-robed figure. This encounter causes Alexis to undergo a strange vision – once she’s back to reality she has mysteriously lost the power of speech, and undergoes a hospital examination in scenes vaguely reminiscent of The Exorcist. Her father decides the best course of action is for them both to have a fresh start and move house; unfortunately there are demonic forces intent on tormenting Alexis which will prove far harder to elude.

With a change of house comes a new school, classmates and teachers; while Alexis’ involuntary lack of speech alienates her to many of her new peers, she is nevertheless taken under the wing of a group of misfit teens. While these good Samaritans initially seem friendly, do they perhaps have more sinister intentions for Alexis? And what connection do they have to the mysterious “Bizugel” she names while undergoing an ill-fated hypnosis session? Many hidden secrets will come to light before Alexis’ struggle with the demonic forces that have surrounded her is over; but will she make it out with her soul intact?

Vibration is not without its problems; many of the acting performances are amateurish at best, with some fairly poor line delivery going on from several of the cast members. The special effects used in the movie are generally poor, although given the micro-budget status of the movie (at around $10,000) this is pretty much to be expected. And the storyline is pretty predictable – if you’ve seen at least one other involving covens and demonic forces you shouldn’t have too much trouble signposting the story here as it unravels.

Nevertheless there are some very positive aspects to the movie too; one of the strongest being the excellent soundtrack, for which auteur director Shawn Garrity is also partially responsible. Many scenes play out accompanied by beautifully poignant music, being often weird and ethereal but also oddly uplifting as well – and each piece works perfectly with the events unfolding on screen.

And some of the visuals are superb, particularly those in the dream sequences and visions; while some cheap CGI is occasionally used to provide the backgrounds on screen for these, this actually works in the movie’s favour – giving the scenes an off-kilter, hallucinatory effect that looks unreal and disturbing. Although probably not intentional, some of these scenes bring to mind the similarly weird visions seen in Ken Russell’s completely bonkers Altered States.

How much enjoyment you get from Vibration may depend on how much tolerance you have for shoddy acting; even for a low budget movie the performances here can sometimes pull you right out of the movie. But if you can overlook this and appreciate the better aspects, there are worse ways to spend an hour and thirteen minutes.