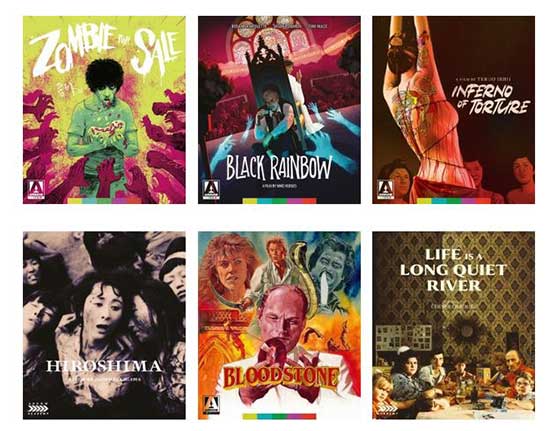 Arrow’s July Lineup Includes Underseen Classics and Award Winners!
Arrow continues to bring the fire this summer with 6 new July releases that offer a little something for everyone. Korean zombie comedy? Arrow has it. Supernatural British thriller? You bet! Indian-American action-adventure? Yep!
Arrow starts slinging the heat on July 7th with three titles starting with Zombie for Sale. This zom-com from first-time Korean director Lee Min-jae is the story of a giant pharmaceutical company’s experiment gone wrong. The result? A revitalised zombie with the power of youthful life. This hilarious release includes a Q&A with Min-jae, audio commentary, and more.
Also hitting stands on July 7th is the supernatural thriller Black Rainbow from legendary British director Mike Hodges. Rosanna Arquette stars as a medium that witnesses a hitman killing a whistleblower in her latest vision. The hitman becomes aware of this and places the medium on his list. This release features a brand new restoration approved by Hodges.
The final July 7th release isInferno of Torture. This film from the “King of Cult,” Teruo Ishii is a story centered on the high demand for tattooed geisha and the rival tattoo artists that wage war for their bodies. This release includes an audio commentary with Japanese cinema expert Tom Mes.
On July 14th, Arrow Academy will release Hiroshima. This realistic retelling of the day the bomb dropped from director Hideo Sekigawa has virtually gone unseen since its initial release in 1953. Variety praised the film for its sequence showing the immediate aftermath of the bomb, calling it “a brilliantly staged and photographed quarter-hour which ought to go down as a masterpiece of pictorialized destruction and agony.” The release includes a 2011 documentary featuring survivors of the Hiroshima and Nagasaki atomic bombings now residing in the United States.
Arrow’s July lineup comes to a close on July 21st with two releases – Bloodstone and Life is a Long Quiet River. In Bloodstonea newlywed American couple heads to India to celebrate their honeymoon when they accidentally come in possession of a stolen ruby getting them caught in the adventure of their life. Bloodstone was directed by Dwight H. Little off a script written by Nico Mastorakis. In Life is a Long Quiet River two babies are switched at birth leading to a witty send up of class relations and family ties. This outrageously wicked French comedy from 1988 was nominated for 7 César Awards, winning 4, and became a cult classic.
All 6 release will be available from your favorite video retailer.
Share