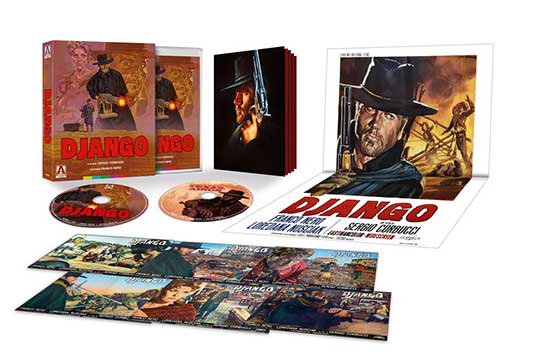 Arrow jumps into Summer with a charming documentary, an underseen classic, a long-lost VHS-era gem, and the definitive Spaghetti Western!
As the summer months descend upon us, Arrow continues to provide plenty of reasons to stay indoors. While June’s lineup is relatively light in quantity, the quality is as high as ever with three new titles that every collector is going to want to get their hands on.
The excitement kicks off on June 2nd with the Arrow Academy release of America As Seen By A Frenchman. French documentarian François Reichenbach spent a year and a half traveling the United States capturing some of the most famous sites and sounds. The result was a look at America with a French sensibility.
Arrow Academy will have a second release for the month on June 23rd with director Tomu Uchida’sThe Max Fox. This visually stunning masterpiece was highlighted in the August 2007 issue of Sight & Sound as one of their “75 Hidden Gems – The Great Films Time Forgot.” This release, featuring a brand new restoration courtesy of Toei, will mark the film’s worldwide Blu-ray debut.
Also on June 23rd comes the release of Dream Demon via Arrow Video. A soon-to-be-wed woman starts having terrible dreams that start to blend into a frightening reality. Harley Cokeliss’ gory ’80s psychological nightmare has languished in obscurity for the last three decades, but that will soon change with this new 2K restoration approved by Cokeliss himself. In addition to the theatrical release, Arrow is proud to present to the director’s cut for your viewing pleasure.
The month comes to a close with the highly anticipated release of Django on June 30th as a limited edition Blu-ray as well as a Steelbook. In this definitive Spaghetti Western, Franco Nero (Keoma, The Fifth Cord) gives a career-defining performance as Django, a mysterious loner who arrives at a mud-drenched ghost town on the Mexico-US border, ominously dragging a coffin behind him. With Django, director Sergio Corbucci (The Great Silence) upped the ante for sadism and sensationalism in Westerns, depicting machine gun massacres, mud-fighting prostitutes and savage mutilations. A huge hit with international audiences, Django’s brand of bleak nihilism would be repeatedly emulated in a raft of unofficial sequels. The film is presented here in an exclusive new restoration with a wealth of extras including the newly restored bonus feature Texas Adios, which also stars Franco Nero, and was released as Django 2 in several territories.
All June releases will be available at your favorite movie retailers.
Share