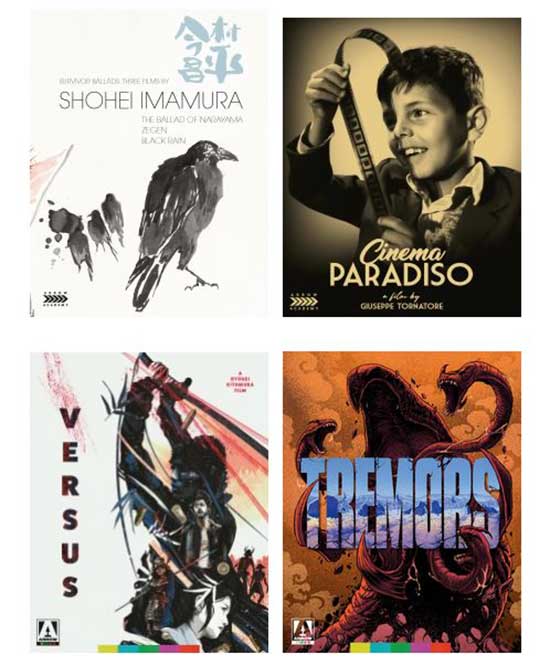 2020 has been a tough year for us all, leaving many to look forward to 2021. Arrow is looking to send us out on a high note with another stunning lineup of releases. Grab some popcorn, sit back, and start 2021 on the right foot by ending 2020 with some of the year’s best Blu-ray releases.
Arrow opens the month with three titles releasing on December 8. First up is the classico Italiano, Cinema Paradiso. Loosely based on the story of the Protti family, a filmmaker recalls his childhood growing up at his local cinema and the bond he built for the theater’s projectionist. Cinema Paradiso was a box-office hit and is widely regarded as a classic, winning the Oscar for Best Foreign Language Film at the 62nd Academy Awards. Arrow will release the film on DVD, Blu-ray, and 4K Ultra HD. Watch the new trailer HERE.
The second December 8 title is Survivor Ballads: Three Films by Shohei Imamura. One of the leading directors of the Japanese New Wave era of the 1960s, Imamura further developed into one of the countries most important directors in the 1980s. Arrow Academy is proud to present three of the director’s most important films from the decade – The Ballad of Narayama, Zegen, and Black Rain. All three films showcase the director’s unique talent for looking at the underbelly of Japanese society and shining a light on the lower totem members of society that struggle to get by. Vulgar but beautiful, the works of Imamura are a must for cinephiles the world over. Watch the new trailer HERE.
Arrow presents a much different flavor of Japanese cinema with Versus from director Ryuhei Kitamura. A wicked combination of martial arts, gunplay, sword fighting, and zombie horror come together to create a one-of-a-kind experience that the Rolling Stone described as “Quentin Tarantino remaking The Evil Dead while on a speed binge.” And by all accounts, that is exactly what Kitamura was aiming for, saying the film pays homage to both the Sam Raimi classic and Highlander. Versus is presented in both its original 2000 release and the expanded 2004 cut, both with director-approved restorations. Watch the new trailer HERE.
Arrow brings the month to a close on December 15 with Tremors. Now celebrating its 30th-anniversary, Tremors is the story of a small desert town defending itself against horrible underground creatures. This horror-comedy classic from director Ron Underwood features a star-studded cast that includes Kevin Bacon, Fred Ward, Michael Gross, and a gun-toting Reba McEntire. Hailed by the Washington Post as “a delightful throwback to such ’50s and ’60s films,” Tremors has spawned a franchise of six additional films, one television series, and it doesn’t appear to have an end in sight. Arrow is bringing Tremors and the graboids to a limited edition Blu-ray, and for the first time, glorious 4K Ultra HD. Watch trailer HERE.
Share

Arrow Video US – May 2020 Release Schedule