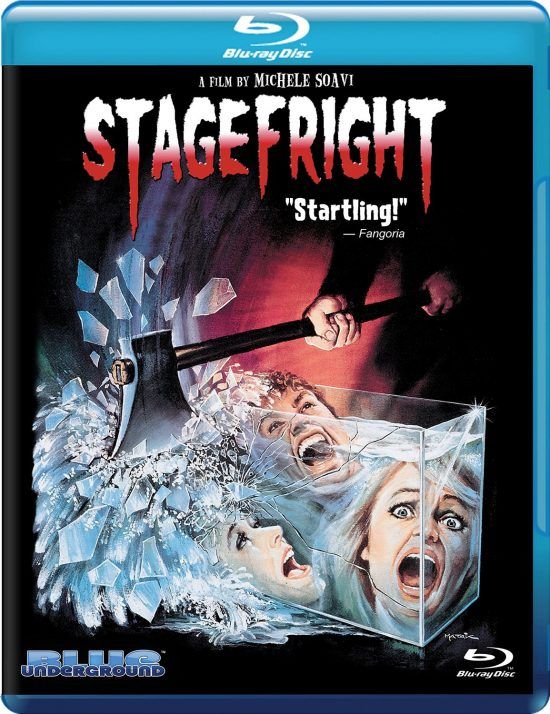 An acting troupe trying their hardest to pull together and mount a controversial musical finds themselves outwitted when a serial killer escapes from a local mental hospital and inspires a change in the musical’s narrative to horrific effect.

Michele Soavi’s Stage Fright (1987) is one of the most entertaining Italian giallo films ever made that is not directed by Dario Argento. This stunning directorial debut by the man who was frequently Mr. Argento’s second unit director on previous films only gets better with age and easily lends itself to repeat viewings despite being somewhat marred by a disappointing ending. The film is beautifully lit and photographed and is a slasher film that one can call truly lurid in its execution, but at times it is also very funny. It boasts a premise that is formulaic to be sure, but its very simplicity works in its favor. Plus, the idea of being trapped inside a building with no possible way out is one that anyone can find frightening.  Stage Fright (not to be confused with the 2014 Meatloaf film of the same title) calls to mind Lamberto Bava’s Demons (1986) which follows a similar plot (folks who band together to ward off an intruder and cannot find an exit) and the mammoth Metropol Theatre. In fact, Mr. Soavi played the metal-faced punk in Demons who handed out the invitations. He’s also the young cop in the police car outside the theater in Stage Fright, redubbed dialog and all. The film has the usual charms one has come to expect of the Italian horror cinema of years gone by: quirky character banter, quotable lines, off-the-wall camera moves, and a phenomenal musical score, here done by Simon Boswell and Stefano Mainetti. 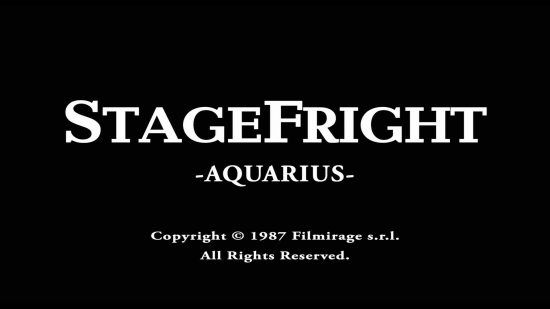 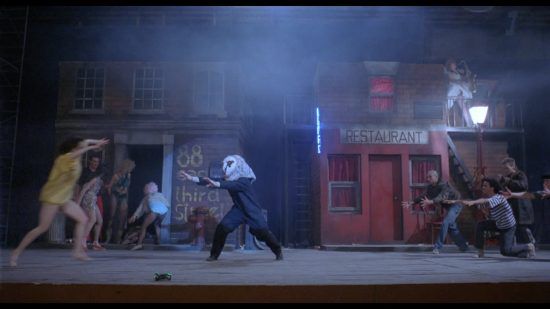 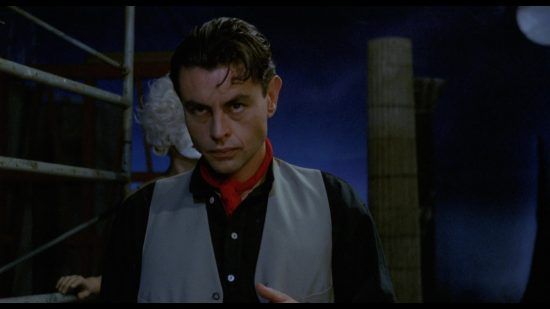 Filmed in April and May of 1986 right after Russia’s Chernobyl nuclear disaster (one of the characters in the film even writes out a cash receipt dated April 26, 1986 – the very day of the Reactor 4 meltdown), Stage Fright’s opening credits play over some strange sound effects, slow footsteps, a door opening, someone forcing a mop into water, a cat meowing and screeching, etc. The film then opens on a shot of Lucifer, the stage manager’s black cat who happens to be running through a stage play that is in rehearsal. His appearance cannot go unnoticed. Before the dawn arrives, more bad luck than one can shake a stick at will befall the entire cast of this production. Lucifer seems to be the harbinger of bad luck for the entire group. David Brandon, the photographer in Lamberto Bava’s Photo of Gioia (1987), stars as Peter Collins, the director of a theater troupe of amateurs rehearsing for the play that is opening much sooner than he lets on. Described by one of the young women as an intellectual musical, “The Night Owl” is the story about a murdered prostitute who comes back from the dead and rapes her own killer. Nice, huh? 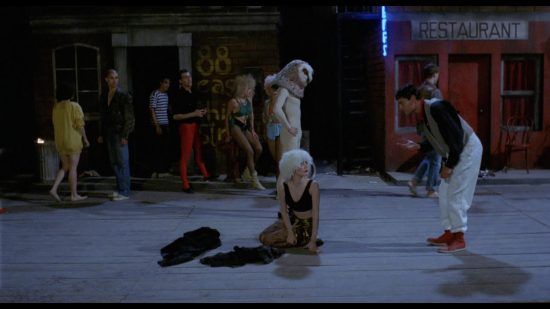 Peter tries to get his cast together and in synch with the music, but they are all over the place, no pun intended. Unbeknownst to him and the others, Alicia the leading lady (Barbara Cupisti) and Betty the wardrobe mistress (Ulrike Schwerk) sneak out in the hopes of finding treatment for Alicia’s twisted ankle. Naturally, they go to a mental institution because psychiatrists are doctors, too, aren’t they? Naturally, it’s pouring. Naturally, the institution houses Irving Wallace, an actor who went crazy and killed 16 people. And naturally, Wallace manages to escape and find refuge in Betty’s car that very night! Amazingly, Mr. Soavi makes no effort to conceal Wallace’s face from the audience; we know what he looks like, and he is frightening. After the police interrogate everyone, Peter decides to use this horrible incident to his advantage.  Unfortunately, the real killer is hiding in the theater that they cannot exit. 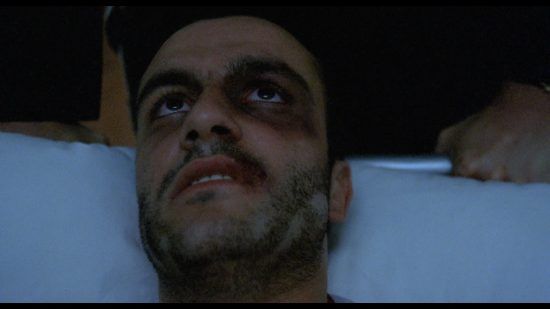 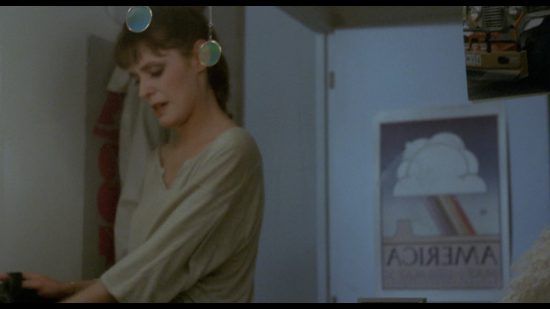 The ending is truly bothersome, because it throws in the usual tongue-in-cheek horror movie ending staple that became so prevalent in the genre’s lesser offerings.

Don’t let this one disappointment stop you from seeing Stage Fright. What the ending lacks in the way of logic is more than made up for in mood, music, sound effects, and the constant drone of thunder from outside the theater.  All these elements mix to make Stage Fright a terrific slasher film.

The film was distributed by the late great Filmirage, an Italian film production company founded in 1980 by Aristide Massaccesi (better known as Joe D’Amato) which brought a whole slew of crazy genre films to the States before closing its porte in 1994. 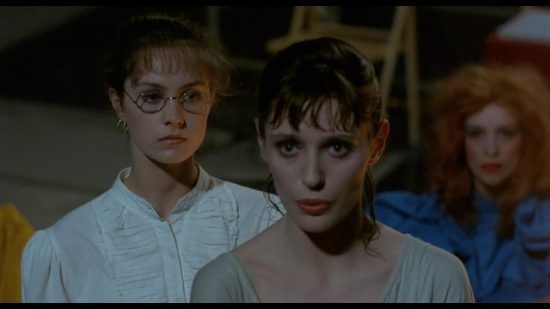 The Blu-ray from Blue Underground is a revelation and worth the upgrade, not just for the beautiful image, but also for the wealth of extras that the disc has to offer. This is the first time that this film has been available in the United States with any extras to speak of:

Theatre of Delirium – Interview with Director Michele Soavi (approx. 19 minutes).  I must admit that this is the first time I have seen a sit-down discussion with Mr. Soavi (pronounced mic-KELL-ay so-AHV-ay), a director who showed tremendous promise with this first feature. His subsequent offerings have been hit or miss and he now seems to work solely in the realm of Italian television productions.

Head of The Company – Interview with Star David Brandon (approx. 12 minutes). This is an interview with one of my favorite actors in the film.  Mr. Brandon played Peter the director, whose dictatorial style is what holds the group of amateurs together as they are dispensed with one by one Ten Little Indians-style.

Blood on The Stage Floor – Interview with Star Giovanni Lombardo Radice (approx. 14 minutes). This actor is better known internationally as John Morghen and has appeared in a wealth of brutal horror films for Ruggero Deodato and Lucio Fulci. Here he speaks of his experience making the film, and his annoyance with one of the actors who was not a trained performer.

The Sound of Aquarius – Interview with Composer Simon Boswell (approx. 18 minutes). This piece shines a light on the film’s score, which is one of my favorite scores and was once released on the Lucertola label in a limited pressing of 1200 copies and how Simon Boswell the composer came to score the film. The score is terrific.

The Owl Murders – Interview with Make-Up Effects Artist Pietro Tenoglio (approx. 11 minutes) is interesting in that Mr. Tenoglio has nearly 60 credits to his name as a make-up artist, yet he is not as well-known as Sergio Stivaletti who contributed effects to many other contemporary giallo films, such as Demons (1986) and Opera (1987).  I am glad that he is given his due here. 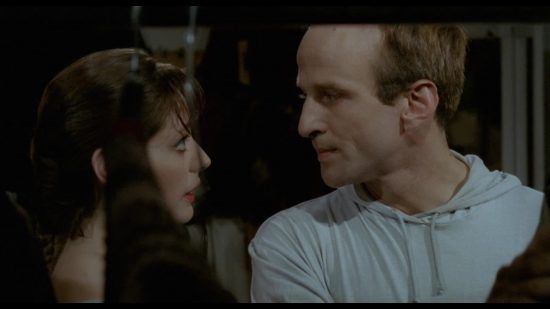 The requisite theatrical trailer and poster/still gallery rounds out the extras. 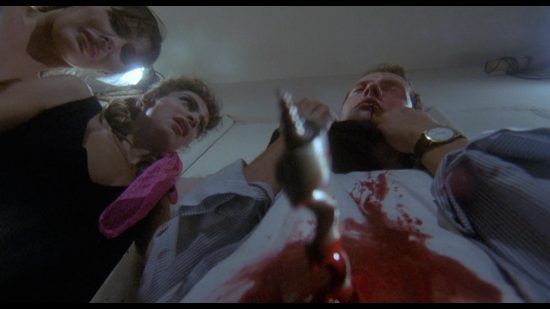 Owning this on Blu-ray is a must for fans of this film. The dark, contrasty-looking transfer from the Eighties that plagued both the VHS and laserdisc pressings has been upgraded to a gorgeous and colorful palette which makes me yearn for the now bygone days of Italian horror cinema. 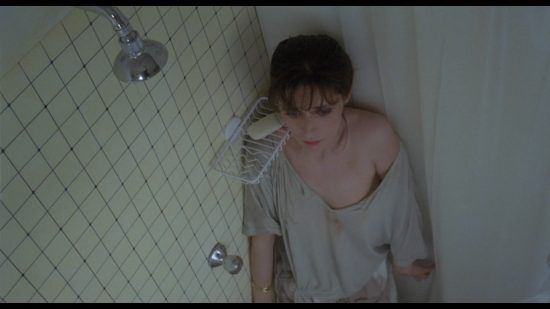 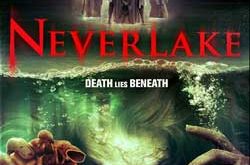 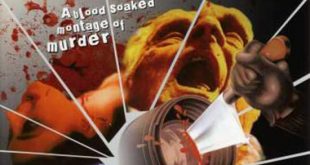 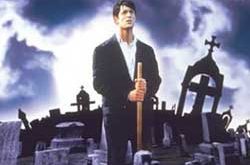