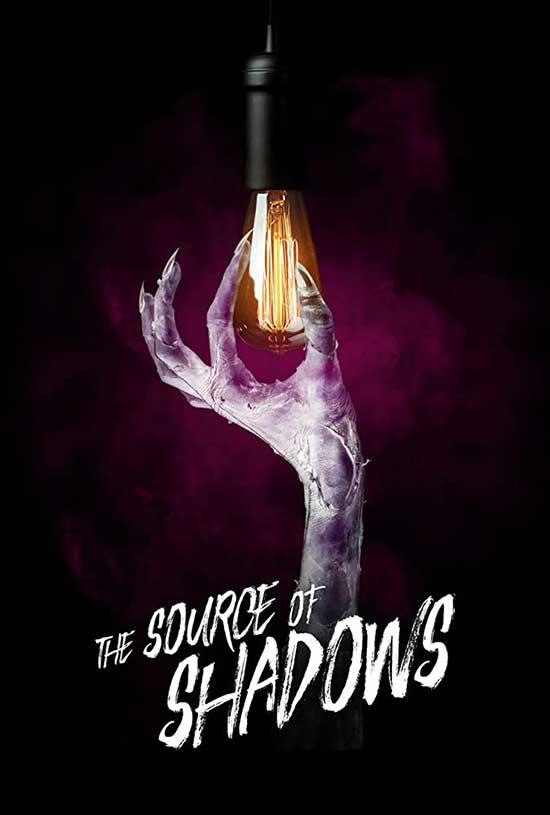 A series of stories woven together by one of our most primal fears, the fear of the unknown.

“The Source of Shadows” is a collection of 10 short horror films. The list, in order of appearance:

Tethered – the story of a young blind man who finds comfort in a recording of his mother’s three rules of survival. When he challenges the rule of “Never let go of the rope”, things change forever.

Inside the House – What seems to be a stalker sizing up a very cute victim soon becomes a completely different kind of set up.

Am Berg – A hunter in his cabin deep in the forest and hills discovers he may not be as alone as he hoped.

Adrift – A loving relationship takes a deadly turn in the middle of blue waters, but separation is not always permanent.

Don’t Look into Their Eyes – A young woman is in hiding from spirits who may not have her good health in their thoughts.

Bestia – A trapper looking to capture a terrifying beast becomes caught in his own trap.

Banshee – A young girl, after being lost in the forest, becomes obsessed with a frightening image. Her older sister refuses to acknowledge the younger girl’s fear until she must face what is hiding in the closet.

Transient – What appears to be a young man relaxing at home becomes a completely different tale once the homeowners return from the store.

Beastly Things – A girl is tormented by a group of children her age. Can she escape, and what price will she pay for her freedom?

Withheld – A phone-sex worker is tormented by a caller who seems to know more about her than is normal. Then he becomes threatening.

Unlike an anthology that has self-contained stories hooked to a central concept, “The Source of Shadows” is said to be based around a fear of the unknown but uses shorts that usually become little more than interesting scenes, often ending in a “gotchya” shot.

Of the ten, “Banshee,” “Beastly Things,” and “Withheld” bring their tales to reasonable conclusions. The rest, as mentioned, would make for great scenes in either movies or longer shorts, but, as is, pretty much feel like some stranger elbowing you in the ribs every few minutes while saying, “Ooh, that was spooky, huh?”

Most of these shorts would make for great demo reels for either the crew members or cast members to put on a resume. Other than some mild cheesiness or weak acting, each of the films tends to look great and make excellent use of their locations while showing you actors who deserve to get more work in meatier roles.

Other than the rather silly “Inside the House”, each short develops a pleasant sense of menace, whether it is a wedding ring that will not be disposed of or four young kids who transform into a multi-limbed creature of questionable intent. The characters in these films sense this dread and each will act according to their own panic, fear, and opportunity. This tension gives the characters enough humanity that the viewer can also sense the dread.

Sadly, most of the shorts end up feeling like a sneeze that dissipates just before it hits. As a result, the segments do little more than wind up the viewer before sending you on to the next, which usually repeats the process with a different location and characters. While these films clearly show filmmakers with great skill and talent, the items on display tend to leave the viewer unfulfilled.

Taken separately, the shorts would be great things to wedge between feature films just to keep your audience hyped and tense between the full features. Even as a quick horror fix on some streaming service like YouTube or DailyMotion, these films would be wonderful little bites of spookiness and quality filmmaking. Once they are strung together, their individual impact is diminished.

If viewed purely as a showcase of short horror films that should probably be enjoyed one at a time, then “The Source of Shadows” works. Attempting to see these individual works as parts of a larger whole tends to weaken the impact overall. Seek out “The Source of Shadows” only if you have no access to a video platform that will allow you to enjoy such short films individually as intended.