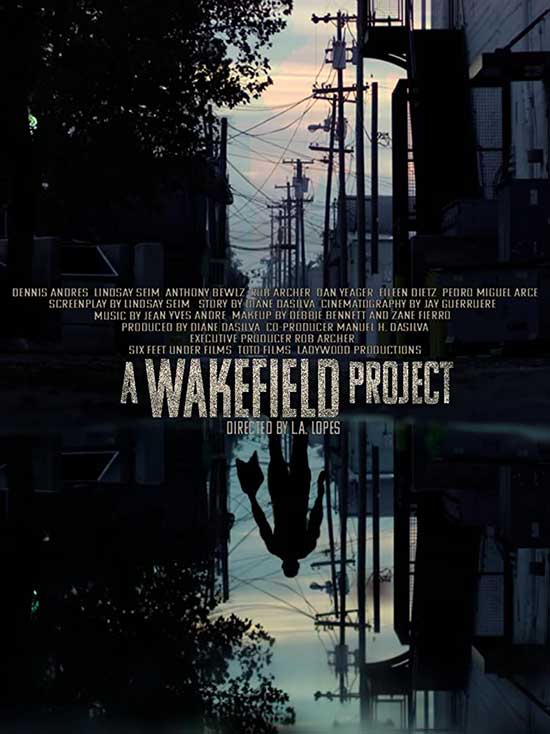 The veil between the living and the dead has lifted for 24 hours, would you survive?

I was initially drawn to this film because of the name. In West Yorkshire, where I live, there’s a town called Wakefield. It’s not the nicest place on Earth but has an awesome art gallery and a couple of my friends live there. Plus, one of my lecturers at university was called Dr. Wakefield. So, when I saw the title, A Wakefield Project, a felt an affinity to it and was instantly the starting point for my latest review assignments. Well, I can tell you that the town doesn’t feature (and neither does my old lecturer) but it shares the same juxtaposition as the aforementioned locality: it’s crappy but there are some elements that I really like.

A Wakefield Project, written by Lindsay Seim and directed by L. A. Lopes, tells the story of two friends, Eric and Reese, who by an old inn with a shady, blood-stained past. They enlist the help of Chloe, a psychic and possible love interest, and set about solving the mysteries that the old hotel harbours. The paranormal activity appears to coincide with a series of solar flares that are causing the boundaries between the living and the dead to waver.

AWP opens with a spooky, gut-punch that is both innovative and genuinely chilling before introducing the main characters and their newly bought inn. The atmosphere created in the first few minutes are immediately quashed by a strangely slapstick awakening that become the general motif of the film. As negative as this sounds, these cheap laughs (whether intentional or not) provide a couple of great moments in the film, such as the ‘light bulb scene’ – which changed my eye-rolling to a belly laugh in a few seconds. It just feels a bit amateurish and misguided, not to mention confusing.

And in A Wakefield Project confusion reigns. I started writing this review and the more I thought about the film, the more my head started to spin.  Lopes and Seim have really used a ‘kitchen sink’ approach as this film has so many tropes thrown in; spooky children, Lovecraftian cosmic horror, a psychotic butcher, mysterious VCRs, spooky hotel, sinister townsfolk. I could go on!! There’s just so much thrown in that that I came out the other side feeling like I’d been through the cycle of a laundry machine, washed in a solution of dubious acting and time better spent.

The acting is the final nail in this film’s coffin and, boy, is it terrible! The main character, Eric (played by Anthony Bewlz), is completely devoid of any personality. Seriously! There is some character development over the course of the film: his dad has died recently, and he’s attracted to Chloe, but it’s all delivered in the same deadpan, expressionless tone. I honestly thought that he was playing for laughs but have concluded that he just can’t act. Thankfully, Dennis Andres (who plays Reece) is excellent.  At the start of the movie, he has the potential to get really irritating really quickly but I was surprised to find that I warmed to him. He a genuinely funny, caring character who gives the viewer some much needed respite from Eric.

I hope that you have sensed (excuse the pun) that I have a bit of a soft spot for A Wakefield Project and it’s a film that I would watch again, if only to prove that I’m not making it up. It tries to be too clever and fails miserably, there’s far too much going on for it to be called ‘mindless popcorn fodder’ and the lead actor could have been replaced with an inanimate object. However, there’s something there that keeps it in my mind. It might be those knowing, atmospheric flips or the nods to nonsensical horrors from outer space but it’s obviously a labour of love for the director and writer and this is apparent throughout this strange, strange mess.