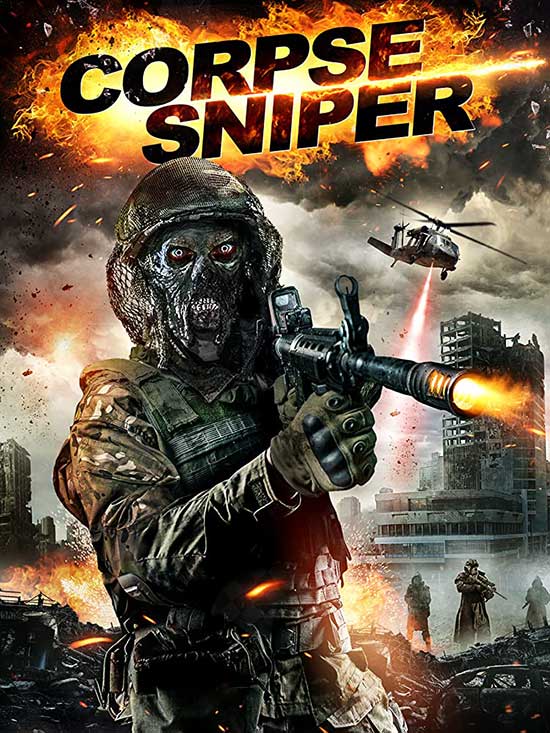 The undead are former militia soldiers that are now indestructible snipers. A widow goes looking for the body of her husband but comes across a corpse that wants to end his new unjust life.

Beginning with an opening title card reminiscent of a Commodore 64 game, Sniper Corpse tries to hook us in “Latvia”, where we find two drug cartel goons being goon-like and rudely interrupted by a British soldier. Ignoring the question of why British soldiers, undead or otherwise, would even be in “Latvia” looking for a drug cartel, you are further perplexed and concerned for the film as a whole by the lack of emotion the goons convey, firstly when the Sniper Corpse appears, then when he doesn’t go down from the numerous shots these unemotive goons are shooting, and finally when they are staring straight into the barrel of his gun.

We are then propelled to the UK, where we meet our protagonist, Diane Keeley (Eleri Jones). Here we find out numerous times with hard exposition via dialogue and over-worded voiceover, that her soldier husband was KIA but his body mysteriously disappeared along with other soldiers. 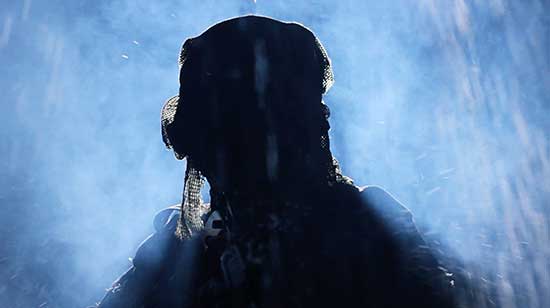 Diane receives intel from an anonymous tip-off about a nefarious military project, so armed with a magic phone that can perform facial recognition on a zombie and match it to their pre-death identity, as well as magically scroll through photos of the scanned identity at the perfect time without user interaction, Diane goes on the hunt to find the truth and her husband. But things aren’t so easy for Diane, well, except for getting into a super top secret facility undetected because there’s undead killing machines lurking in the shadows, all who, I might add, do not snipe. The man in charge, Commander Braddock (Kit Smith) wants to keep his reanimation station a secret so when he finally finds out Diane is on his top secret base, he will stop at nothing to find her.

You are fully aware you are watching a very low budget film but to writer/director Keith R. Robinson’s credit, he worked well within the obviously stringent guidelines, cleverly using darkness to hide shortfalls with some decent cinematography. Gore was adequate with some chunky explosive headshots and other decent practical effects mixed in with average to completely abysmal CGI (that helicopter, Jesus). Sound was decent, except for the annoying phone/radio voices. They were a little too worked on, making it hard to understand what was being said. Since I’m not American, I can’t tell if the gun sound effects used matched the actual weapon on-screen, but they sounded deadly. Sidenote: If there was a kangaroo snorting Vegemite through a didgeridoo, I’d be able to tell you the sex of the kangaroo, the expiry date of the Vegemite, and then catch Chlamydia off a koala. 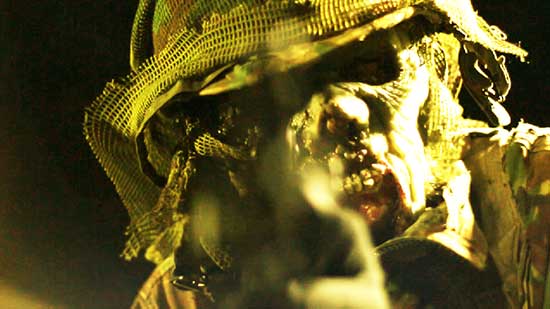 Keith R. Robinson tries to utilise an emotional storyline but unfortunately the acting, direction and redundant repetition hindered him. I had to sit through an almost 3 minute scene which essentially boiled down to two characters arguing if soldiers were either alive or just “meat” in varying sentences. This kind of thing happened numerous times and would have been much more effective to the film if they were kept sub one minute. 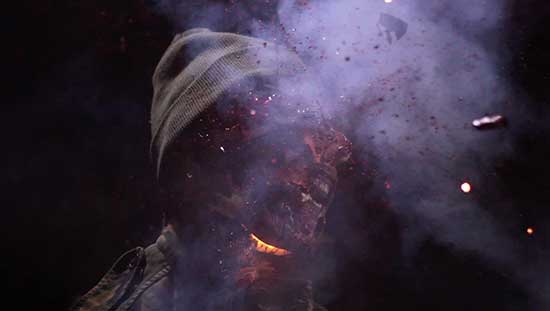 The exposition was cringeworthy and delivered via voice-over mostly. Instead of offering a different view/thought/information as voice-overs should, we were treated to expositional dialogue from Diane, explaining things with such flourish, it would make a novelist blush. Worse though, the voice-over was used to provide commentary of a scene, saying EXACTLY what had just been said or shown in that very scene. We already saw/heard it, why do we have to be told it again, and sometimes again?

The emotional range of our protagonist was a big letdown. If you are in mortal danger, you’d be bloody scared, maybe even scream a little, but Diane could only muster a stoic gaze. At the climax, when the script really tried hard to pull on your heart strings, she couldn’t deliver the emotion required, so the intention of the scene fell flat.  It was not just the actor’s limitation that is to blame, it was the direction too as it should have been identified and fixed. Look, maybe I’m just a heartless emotionless bastard with less empathy than the not so sniper Sniper Corpses, but I just couldn’t get emotionally invested simply because the characters weren’t.

A gripe I have; despite the title being Corpse Sniper, at no point do you see a corpse doing anything remotely related to the act of sniping. That’s like going for a massage inside a building with a huge sign advertising “Physio Massages” but when you get there it’s a Chiropractor. Like a zombie with a machine gun, they’re both not what was advertised, but both will cause mortal damage to anybody stupid enough to go near them..

Sniper Corpse is not the worst film I’ve seen by a long shot (sniper pun!), however it’s padded out runtime and numerous redundancies lack the headshot (another sniper pun!) to keep you invested and when you can experience a better version of the concept with the added bonus of Jean-Claude Van Damme’s tight ass and a severed ear necklace, you’d be hard pressed to choose Sniper Corpse, a script which would have been much better as a short film.

2 out of 5 Amazon-bought zombie masks