Arrow Video US – May 2020 Release Schedule 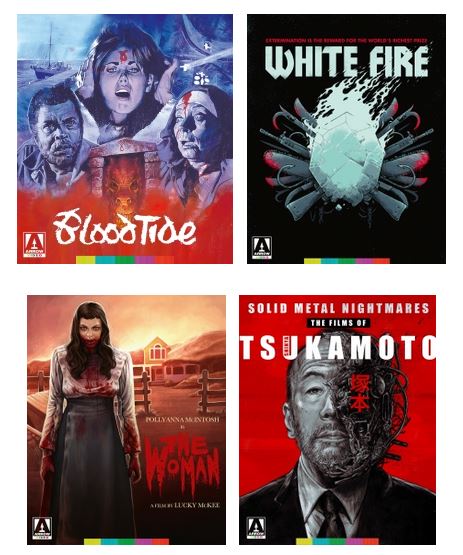 via MVD Entertainment Group
Greek Creatures, Sundance Controversies, Jewel Thieves, and Metal Nightmares Headline Arrow’s May Lineup!
Arrow Video continues to provide home video connoisseurs with exactly what they want – an eclectic line of releases that only they can deliver. May is no different with an exciting lineup of must-own titles hitting shelves on May 26th!
First up is Blood Tide! This tale of terror from Richard Jefferies and Nico Mastorakis stars James Earl Jones as a treasure hunter that mistakenly awakens an ancient underwater beast on a small Greek island. Restored in 4K and featuring a new commentary with Jefferies and an all-new interview with Mastorakis.
Musician turned actor Robert Ginty stars in White Fire, a French-Italian-American-Turkish mashup from director Jean-Marie Pallardy. The film follows a pair of brother-and-sister jewel thieves that encounter tragedy while on the hunt for the elusive ‘White Fire’ diamond. This bizarre action thriller with a dash of eroticism features a theme song from ’80s British rockers, Limelight.
Lucky McKee created quite the stir at the 2011 Sundance Film Festival with the premiere of The Woman. Pollyanna McIntosh stars in the titular role as the last surviving member of a deadly clan of feral cannibals. While out hunting, all-American dad Sean Bridgers discovers the woman and decides to capture her with plans to make her more “civilized.” What ensues is a brutal, bloody nightmare. This twisted film heads home with a new 4K restoration.
Rounding out the May lineup is one of the most anticipated home video releases of 2020 – Solid Metal Nightmares: The Films of Shinya Tsukamoto. This massive box set will serve as the perfect introduction for the cult director with eight feature-length films and a couple of shorts including Tetsuo: The Iron Man, Tetsuo II: Body Hammer, Tokyo Fist, Bullet Ballet, and the home video debut of Tsukamoto’s latest effort, Killing. In addition to the films, the set includes a plethora of special features to make sure audiences are well acquainted with the genre-bending director.
Share