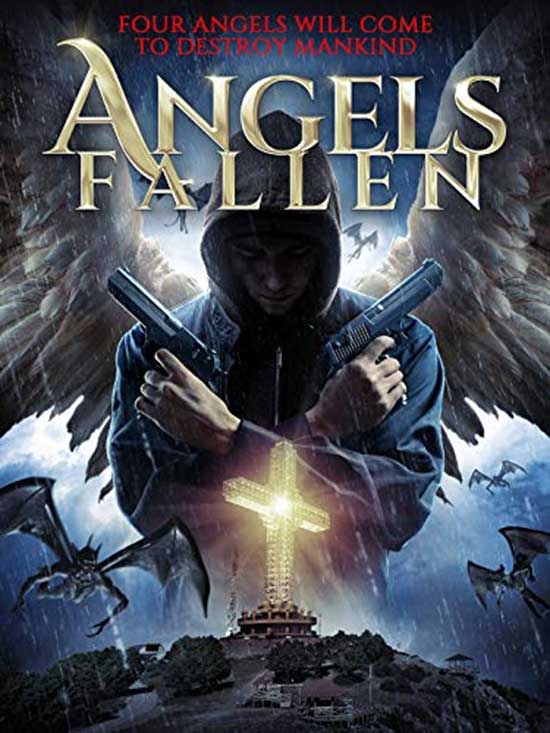 An occult special operations team reassembles years after a team member dies to try and stop the end of the world.

Angels Fallen (2020) is, without a doubt, a fanfiction turned low-budget sci-fi action flick. Characters shockingly resemble genre favorites like Neo from The Matrix franchise and Joss Whedon’s Buffy the Vampire Slayer, with even the costumes and posing being extremely derivative. Director Ali Zamani (Maul Dogs 2015) directs a script from genre actress and writer Amanda Barton (The Amityville Terror 2016) with an overall serviceable cast, but the dull script, bare-bones effects, poor editing, and unintelligible plot relegate this to the virtual dollar bin. 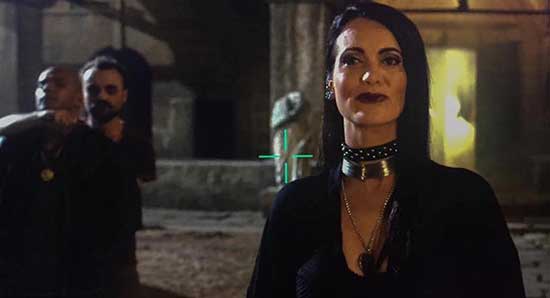 To start with the good, the cast (barring a few exclusions) is capable of much better. The Neo-knockoff named Michael, who comes complete with a black trench coat and Keanu Reeves’ hair, is helmed capably by Michael Teh (Sharknado 2013). His character is supposed to head a team of occult experts tasked with stopping four “angels” from arriving on earth and triggering the apocalypse. Trouble is, the team disbanded with the death of a member, who happened to be married to fellow teammate and demon-killer Gabriel. Gabe is played by Houston Rhines (Deadly Assistant 2019), who unfortunately exhibits only two expressions—forced rage and blank slate. This is made even worse because he’s the de facto hero of the film, and looks like a confused extra next to castmate Nicola Posener (Age of the Living Dead series 2018), the flea-market version of Buffy the Vampire Slayer (even Sarah Michelle Gellar’s iconic stake-brandishing pose is on display).

Posener plays her role as the team’s psychic well, even if Zamani’s directing has her get into tubs and showers with full cake makeup multiple times. It seems her scrying ability only works when she’s in water, though she goes from having to shove her head in a public sink, to needing a bathtub, and then to simply putting her hands in a river. Inconsistencies like this would harm a better film, but go fairly unnoticed here, since there are smellier fish to fry. 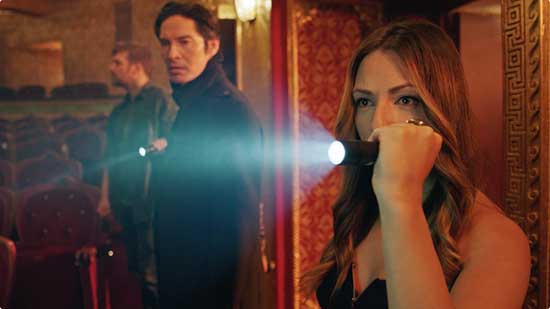 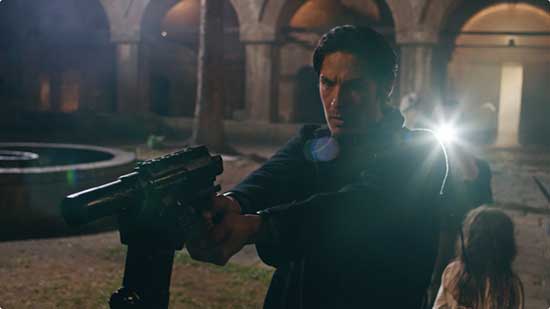 One of these is fellow team member Ty, played by former pro soccer player-turned actor William Legue (Caliphate series 2020). I’m fairly certain Legue’s character was pulled from The Fast & The Furious, and is a prime focus of the “let’s get the team together” section that takes up the first twenty minutes of screen time.

He chews the scenery, but that’s not terrible compared to his character’s weirdly misogynistic treatment of one of the evil angels, Jem, who he also happened to have sex with. Jem is played by the beautiful Ivy Natalia (Dear White People series), better known by her adult career title Nasia Jansen, who spends a few minutes topless before being dragged around the movie in a hoochy-dress. During this time, she’s called a whore, cursed at, has her hair-pulled, and is spit on by Legue’s “heroic” character. It plays all wrong, and doesn’t even have the trashy allure present in a 70’s Jess Franco romp. 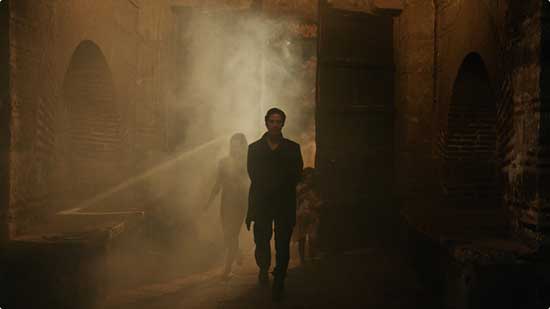 Rounding out the cast is actress and stunt person Li Jing (Max Havoc: Curse of the Dragon), who also choreographs the fight scenes. These scenes, while not amazingly memorable, are the better moments in the film. This is because the plot is nonsensical and never clearly explained. Rhine’s lead wears a cross, but nothing in the movie relates to any perceptible form of religion, and sad cameos by Michael Madsen (Reservoir Dogs 1992) and Eric Roberts (The Dark Knight 2008) do nothing to elevate the film. (However, be on the lookout for Michael Madsen’s hilarious hand motions throughout the movie, as they’ll be the new dance craze sweeping the nation.)

As mentioned, the effects are very low budget despite trying to accomplish lofty goals. A swarm of locusts carrying a man into the sky is only slightly more effective than the death-seagulls from James Nguyen’s Birdemic: Shock and Terror (2010), and a key prop is literally a plastic snake glued to a stick and spray-painted silver. Well, mostly spray-painted. They should’ve sprung for that second can to complete the illusion.

The directing is not off the hook here, either. One flashback has Posener’s character face-first into a sink with another cast member directly behind her bum. You can imagine the screen capture potential. Most egregious is a shot where Li Jing’s character magically appears on a boat with the rest of a cast when she’s clearly supposed to be elsewhere at the time, as she promptly disappears. 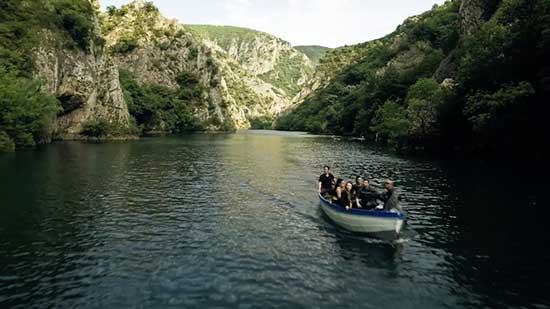 Overall, Angels Fallen is not a successful film, despite a solid effort from the cast in most cases. Amanda Barton’s script is derivative to the point that catching overt characters from other films in it could be a drinking game, and Ali Zamani doesn’t pay enough attention to the details to keep the film out of z-grade territory. Does this mean the film is completely worthless? No. Diehard Ivy Natalia/Nasia Jansen fans have a brief and half-hearted sex scene to look forward to, and genre lovers could set up a good viewing party to laugh at the missteps and pick out all the inspirations. If either of those positives appeal to you, give it a go. If not, this is one VOD to VODon’t.