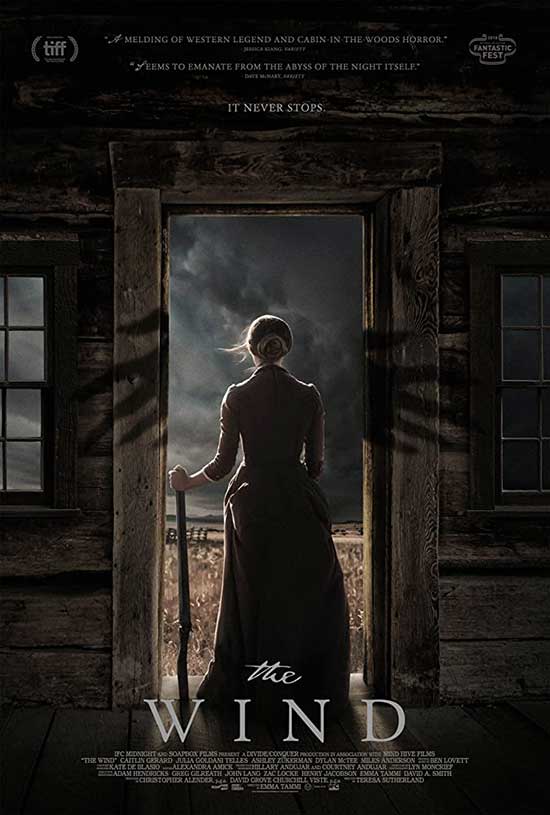 A plains-woman faces the harshness and isolation of the untamed land in the Western frontier of the late 1800s.

The Wind, directed by Emma Tammi and written by Teresa Sutherland, is a western horror movie that takes place in New Mexico sometime during the late 1800’s. Although it has a relatively short run time of only 87 minutes and only includes four central characters the film accomplishes its creepy intent and solid story telling. Quite a bit of time was spent on the character development of the film’s star Lizzy Macklin (Caitlin Gerard) who we get to follow in her psychological deterioration throughout the movie. While there were some slow-moving scenes and some of the chronology was a bit confusing, overall the desolation of barren New Mexico setting and the desperation of the characters made for a very frightening and entertaining film. 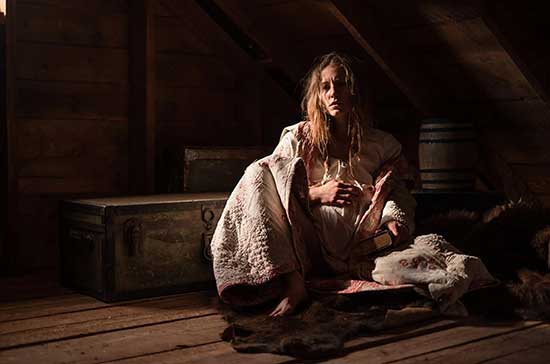 The movie begins with an ominous tone as the camera pans out on Lizzy standing on her doorstep, covered in blood, and cradling what appears to be a dead baby. Immediately following this we see Lizzy and two other men burying the baby alongside the mother who has a large hole in her head from what looks like a gunshot wound. From this startling and unsettling beginning we are taken back in time to show how all these events unfolded. Lizzy and her husband Isaac (Ashley Zukerman) live quietly on a very isolated farm in New Mexico when a couple moves into a nearby cabin. The couple introduces themselves as Gideon (Dylan McTee) and Emma Harper (Julia Goldani Telles) and you can tell early on by the way they put each other down in subtle ways that all is not well with the marriage. 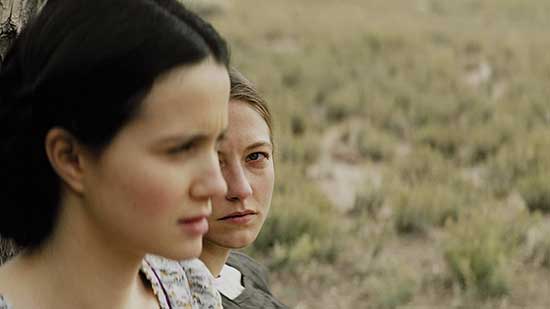 Due to their proximity to each other and lack of other options the two couples become close and Emma and Lizzy form a strained friendship. Emma soon becomes pregnant and Lizzy reveals to her that she was pregnant before and they recently had a still born son. Emma starts to lose it a bit and claims that demons are coming for her and her baby. At some point Lizzy ties Emma to a bed and sedates her with chloroform due to her rapidly declining sanity. While Lizzy appears to be the voice of reason and the levelheaded one, flashbacks reveal that Lizzy also witnessed possible demonic occurrences while she was pregnant. However, Isaac dismisses Lizzy’s claims as related to a paranoia brought on by reading a pamphlet depicting demons, which was given to her by a traveling reverend. Emma’s mental state gets steadily worse and when she is close to full-term pregnancy, she shoots herself (or so we are made to believe) and Lizzy attempts to save the baby. However, both the mother and infant die. 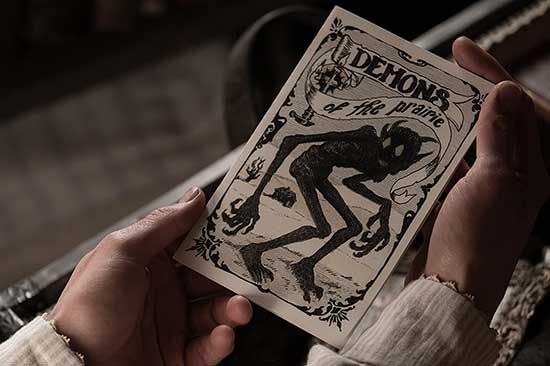 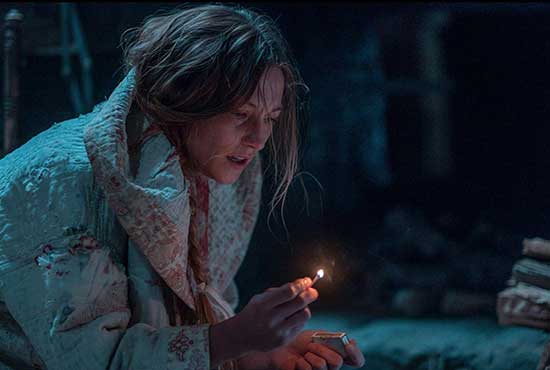 From this point the story follows Lizzy and what happens after the death of Emma and her baby. Isaac and Gideon travel to town to report the deaths of Emma and the baby, leaving Lizzy all alone for several days and nights. During this time Lizzy experiences several disturbing things, including being attacked by wolves, a poltergeist, and shooting her previously dead and then resurrected goat. A couple days in, the traveling reverend appears at her door and Lizzy offers for him to stay in Gideon’s and Emma’s abandoned cabin. She warns him not to open or answer the door during the night for anything, but later that night he frantically pounds on her door asking to be let in after experiencing an attack by a likely demon. She lets him in, but then realizes the reverend has been possessed by a demon and runs to the neighbor’s cabin seeking refuge.

The next morning Lizzy finds the reverend outside and apparently dead. She grabs a shotgun, visits her deceased infant’s grave, and almost commits suicide before Isaac returns home interrupting the attempt. He claims to have seen the reverend a short time ago and even spoke with him, bringing into question Lizzy’s sanity and trustworthiness as the film’s protagonist. Lizzy and Isaac get into a heated argument regarding her paranoia and he leaves the cabin. Shortly after, Lizzy is attacked by an invisible demon and thrown across the cabin. She awakens to find herself tied to the bed by Isaac. Isaac discovered she had been reading Emma’s journal, which reveals Emma’s and Isaac’s affair. He then accurately determines that Emma didn’t commit suicide but was actually murdered by Lizzy. Lizzy manages to get free and murders Isaac with a pair of scissors. The final scene depicts Lizzy sitting out in a field alone and reflecting to when she first met the reverend and was given the pamphlet about the demons. 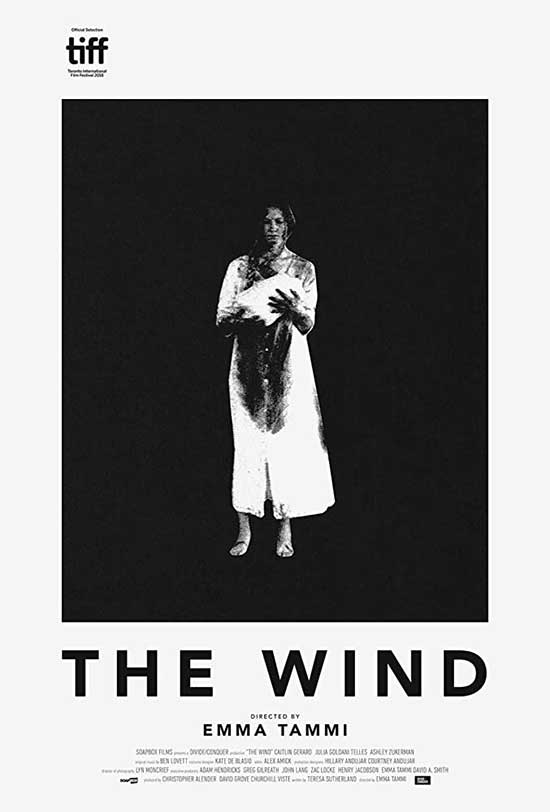 The ending to the film left me with a lot of questions, such as if Lizzy was really experiencing these demonic attacks or if she was in fact insane. Emma also had experienced a demonic presence, but you are also left to question if Lizzy imagined this too or even influenced Emma in some way. While I do wish this would have been revealed by the end of the movie, it’s this question regarding the sanity of Lizzy that makes the film intriguing and thought provoking. The tension and discord between the two couples adds a touch of human drama to the story and enhances the underlying tension throughout. Add to this the desolation of the unsettled New Mexico wild West and the sense of loneliness experienced by Lizzy throughout the film, the uneasiness I felt while watching the film continued to build.

One complaint about this film is the scattershot chronology can be confusing at times. The movie jumps back and forth from future to present to past quite a bit and this creates work for the viewer to understand at what point in the chronology the scene is taking place. However, by the end of the film you can piece together the sequence of events into a cohesive story of either a woman who went completely insane or the story of a woman tortured by unseen demonic forces. The Wind is certainly worth watching and deciding this for yourself.