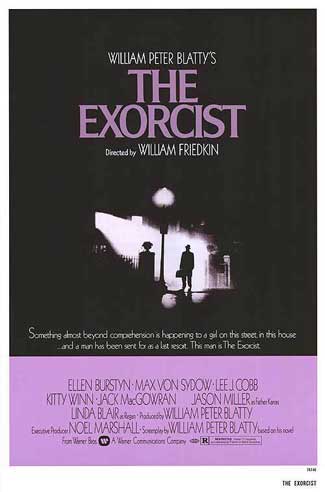 1. The Exorcist (1973)
There are many people who say this is the scariest movie of all time. But I also know some people who laugh when they see this movie; it doesn’t scare them at all. What I will say, is that The Exorcist is the best possession or Devil-themed horror film ever made. I just watched this movie again recently, and man… it was awesome. I’m normally not a fan of movies where the first hour is spent laying the groundwork for 30 minutes of scare (i.e., Wolf Creek), but this movie does that and it’s not boring.

The tension is palpable from the first frame, and it just keeps growing. Poor Reagan goes from bad to worse—so much happens in the first 2/3 of the movie. Some of the most memorable moments happen before Reagan’s exorcism begins. This is one of those films where you sit there thinking, “How can it get any worse?” And then think ten minutes later, “How can it get any worse than that?” And then it does. Max von Sydow’s turn as Father Merrin may be the most memorable performance ever, considering how remarkably little screen time he gets.

Ellen Burstyn is amazing, of course, as is the ever-frightening Linda Blair (in a make-up by Dick Smith and voiced by Mercedes McCambridge). However, the real star of this film is Pulitzer Prize-winning playwright Jason Miller as Father Damien Karrass. He doesn’t go through any major traumas, like Burstyn or Blair, but his pain is evident as is his frustration and despair over losing his faith. This movie is about overcoming demons—both literally and figuratively—and Karrass’ pain is pitch-perfect. 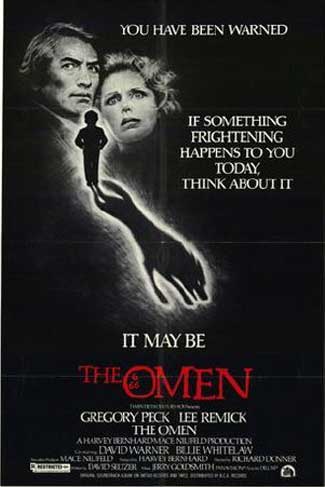 2. The Omen (1976)
Let’s not talk about the remake (you’ll have to wait for another list I’m working on for that). Instead, let’s just focus on how brilliantly terrifying this film is. Gregory Peck is the most straight-laced and rational a leading man you could ask for, even by today’s standards. That’s one of the film’s great attributes. Plus, Damien is so creepy.

And let’s not forget David Warner (I recommend his film Time After Time with Malcolm McDowell if you’ve got a free spot on your Netflix): Did they just cut that guy’s head off? Yes. One of the most frightening moments is when the nanny hangs herself outside Damien’s party. The film deals with the Antichrist, who comes in the form of a child, switched at birth with Robert Thorn’s (Peck) stillborn (actually murdered) baby. This film succeeds with its pessimistic—although realistic—plot. In this movie about Satan, evil wins.

3. Rosemary’s Baby (1968)
The Exorcist is a movie that somewhat glorifies that Catholic Church; Rosemary’s Baby is about Catholic guilt and the sexual awakening that came along with the women’s lib movement. The beauty of Roman Polanski’s early films is that they all focus on one female character. 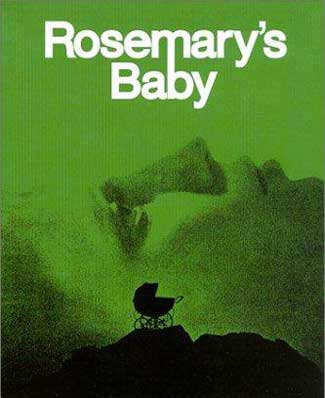 The first film, Repulsion, was about sexual desire and its effect on the mind—in this case, psychosis. Rosemary’s Baby is the next logical step: the sexual awakening’s affect on traditional gender roles. It seems that the children born of mothers who have control and pursue their desires will, of course, be the spawn of Satan. Rosemary’s isn’t faced with the horror of realizing her child is demonic, as in The Omen, but instead is faced with the consequences of her sinful ways. However, the film is also about the vulnerability of women, even the liberated ones:

Rosemary is raped by the Devil (or was it really just her husband being overly zealous?), and, like many rape victims, Rosemary knows it really happened but cannot accept it. The film is also about vulnerability of motherhood. All the people around Rosemary want to take her baby away, and all she wants is to protect it. What makes this film so scary is that there are all these levels of subtext, which gets to you, even if you don’t realize it. This film gets into your subconscious and makes you paranoid. The best horror films make you experience them along with the main character, and Rosemary’s Baby does that like no other. 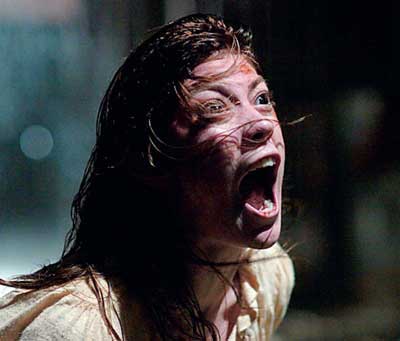 4. The Exorcism of Emily Rose (2005)
The two movies on this list that deal directly with the Devil and possession are both about exorcism. And even though they were made nearly 30 years apart, they both deal with the same fundamental issues and each one deals with the subject matter in a way befitting their time.

The Exorcist is a movie with heavy special effects; in the 70s, what a demon looked like was scary enough. Today, we’ve all seen The Exorcist—we know what a demon looks like. We don’t, however, all believe in the existence of such things. They’re just the stuff of horror films. The Exorcism of Emily Rose is a movie for our time; with its dual court-and-exorcism scenes, the film isn’t about demons or faith in general, but about proving whether demons and exorcism exist. That is what makes this movie so effective: we are given facts and theories about what happened to Emily or what may have happened to her. To reflect our modern mindset, what we believe is left up to us. “People say God is dead, but how can they say that if I show them the Devil?” is one of the most crucial lines from Emily Rose. The movie shows us both sides of the story, the factual and the faith-based, and lets audiences make up their own mind.

5. House of the Devil (2009)
Tom Noonan. Oh, how I love Tom Noonan. I heard a lot about this movie but didn’t actually want to watch it until I learned Noonan was a main actor. He makes any horror movie ten times creepier than it would be otherwise. Plus, this movie is a throw-back to how horror movies used to be, with a simple story but high on the scares, and not skimpy with the blood. The tense atmosphere in this movie is scarier than the actual Satanic rituals that permeate through the final half-hour. This movie capitalizes on the mystery surrounding Satanists and Satanic rituals: What’s really going on? We’re never sure. Does “Mother” even exist? If that’s what you want to call her. What’s at the top of those stairs? The movie gives more questions than answers, including an only semi-resolved conclusion. 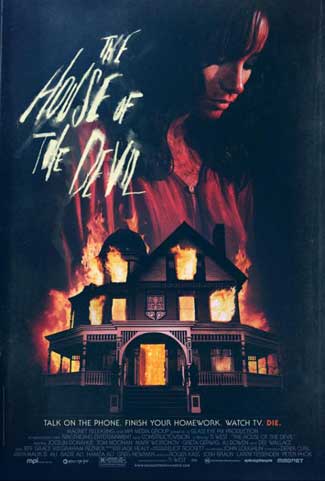 6. Prince of Darkness (1987)
The second part of horror master John Carpenter’s self-proclaimed “apocalypse trilogy,” Prince of Darkness comes after The Thing and before In the Mouth of Madness. (Interesting fact: Carpenter wrote, directed, and scored the film.) A strange cylinder is found in the basement of an abandoned church is LA; inside it is green liquid that constant swirls around. 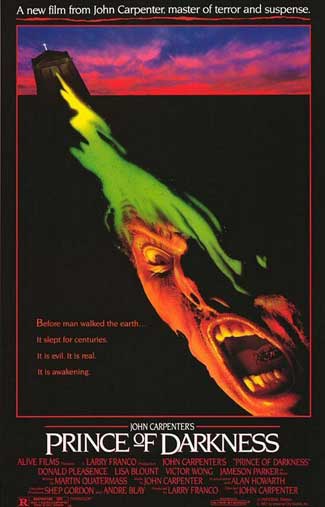 A priest, a professor, and a group of students all come together to examine the cylinder; after reading the text found with the cylinder, they discover that the liquid is actually Satan himself. Little by little, small jets of liquid escape the cylinder and infect the students one by one, making them become possessed. Eventually, the cylinder opens fully and the remaining liquid is absorbed into the body of one of the students, who then becomes the bodily vessel for Satan: a gruesome, telekinetic, disfigured being who has the powers of regeneration. He then attempts to bring the Anti-God (who is more powerful than Satan) through a dimensional portal using a mirror. The girlfriend of one of the possessed students overpowers the vessel and the mirror is shattered, trapping Satan in another realm. Is he going to stay there? We never know: Carpenter cuts the film to black right before the moment of truth.

7. Demons (1985)
A “Dario Argento Presents” feature (like “Quentin Tarantino Presents Hostel”), Demons is one no-holds-barred, punk rock horror movie. It also takes place in a movie theatre, so it’s got the movie-within-a-movie concept going for it. But aside from that, this movie also has so much gore I can hardly describe it. In this film a group of people go to a screening of a violent horror movie. One of the patrons gets a cut on her face from a mask—one of the same masks in the film. Before long she turns into a crazed, bloodthirsty demon. One by one the other cinema-going folk are transformed. This film isn’t very Satanic, but the demons surely are. On another level, this film is a horror film about the evils of horror films, which is brilliant. 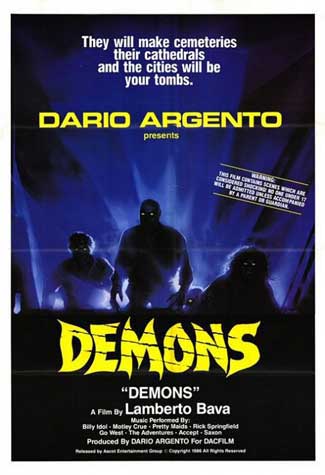 8. The Beyond (1981)
Lucio Fulci knows how to make a great movie. Not only that, he knows how to make one badass, gore-filled zombie movie. The twist on this flick is that the zombies come through a gateway that opens into hell. There are also references to the Book of Eibon, an infamous occultist book, and a little girl who gets possessed. Not a typical zombie or Satan movie, but the combining of the two is genuinely riveting. 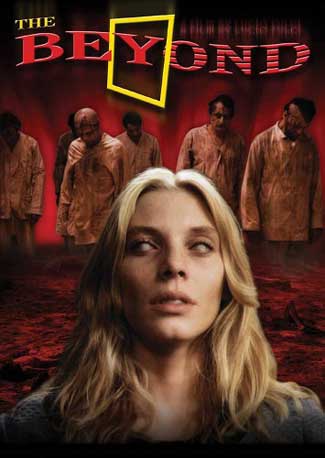 9. The Sentinel (1977)
I’m a big fan of the two series Bravo made years ago, 100 Scariest Movie Moments and 30 Even Scarier Movie Moments. I don’t agree with every movie they feature, and they certainly left some out, but if you love to talk about horror movies then the specials are good for a little discussion. One of the movies features on 100 Scariest Movie Moments was The Sentinel. I had never seen this movie before—I’d never even heard of it—and it seemed interesting. It was only featured for maybe a minute and a half, but that was enough to make me want to see the film. 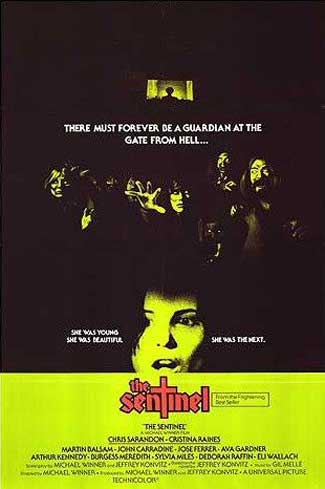 Like The Beyond, this movie is also about a house (or hotel) being a gateway to hell. What The Sentinel does is take that concept to another level by asking, “Who guards that gateway anyway?” Apparently, the Catholic Church does. The blind priest they’ve had keeping the demons out needs to be replaced and Alison, our main character, needs to atone for her sins. She is told that by becoming the new gatekeeper she will be forgiven for trying to commit suicide and will be allowed into heaven. At the end of the film Alison has to face all the minions of hell, and they drive her to attempt suicide again. The priest and another man, Monsignor Franchino, stop her, and Alison takes the Father’s cross, becoming a blind nun who will guard the gateway.

10. The Ninth Gate (1999)
This isn’t the best horror movie—and it certainly isn’t Johnny Depp’s finest 90 minutes—but The Ninth Gate is notable because it’s a film where what you don’t see is scarier than what you do see. Depp plays Dean Corso, a rare books dealer, who is hired by Boris Balkan (Frank Langella, who, as always, is cree-py) to find the three remaining copies of The Nine Gates of the Kingdom of Shadows, a book which, when the illustrations are put together correctly, is said to summon Satan himself. Like The House of the Devil and Rosemary’s Baby (also directed by Roman Polanski), this film is far too intricate to be understood or really liked the first go-round. This movie needs repeated viewings to get the full effect. 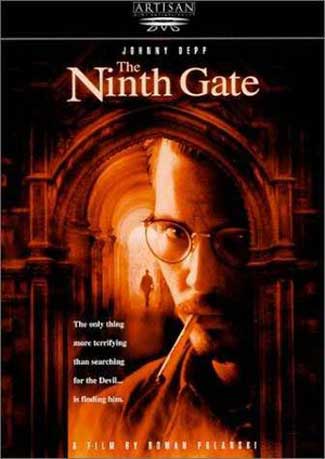