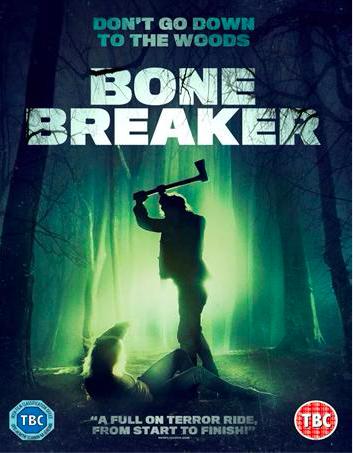 Bone Breaker is horror at it’s best. It’s about a group of friends looking for a weekend of fun. They mistakenly cross paths with the Bone Breaker and their trip has now turned into a fight for survival.

Directed by Nicholas Winter (Robin Hood: The Rebellion), Bone Breaker is one of a long line of films inspired by 1932’s The Most Dangerous Game; itself an adaptation of Richard Cornell’s short story of the same name. Other films include Hard Target, Run for the Sun, Slave Girls from Beyond Eternity, Turkey Shoot, The Furies and most recently, the Trump bothering The Hunt. Perhaps you might want to take one of those around the block and see how they fit. You should absolutely check out The Most Dangerous Game, which was filmed on the sets as King Kong when they weren’t being used during that creature feature’s production. Only after you’ve consumed those should you even consider seeing Bone Breaker.

The film follows Rachel (Sophie Jones, Holby City), a health nut and wannabe social media influencer. Glugging down protein shakes and busting a ton of squats isn’t going to pay the bills, so when the opportunity arises to work with YouTube personalities Emily (Rachel Bright, EastEnders) and Ruby (Lucy Aarden, Death Race 4: Beyond Anarchy) Rachel jumps at the chance. Presenting themselves as fitness content creators with a love of friendly rivalry, Emily and Ruby quickly show their true colors as spiteful backbiters who tear shreds off each other on a near regular basis. And these will be your heroes, people. Le sigh.

For their new video, this mismatched trio – who are euphemistically called friends in Bone Breaker’s promotional material – take themselves off into the woods to film themselves being healthy in the outdoors. Instead of merely just going to a park, they choose to shoot on the grounds belonging to the surly Grace (Jade Colucci, Zombie Resurrection) who, despite having a frown that won’t turn upside down, appears to tolerate the three gym bunnies hanging around. And there’s a good reason for that: Grace is a psychopath and is going to use them for hunting practice.

Clocking in at just a little over 70 minutes, Bone Breaker proves to be a test of endurance not only for its protagonists but for those watching at home as well. It starts off promisingly enough with an opening stinger clearly cribbed from the Saw franchise. Still, once the film starts in earnest, it’s one massive shrug emoji. There’s just zero tension to be felt throughout the whole proceedings. Winter, who also wrote the film, confuses fear with three people bickering at each other. And bicker they do. They bicker until the cows come home. 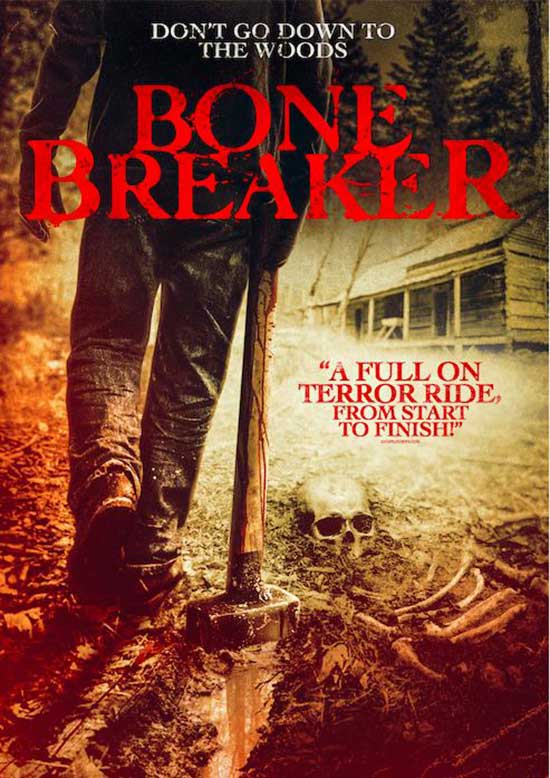 They even bicker when someone takes a crowbar to the face. If you’re going to have us follow people being hunted down and killed, it seems only natural that you would at least make some of them sympathetic. Not in Bone Breaker. Perhaps the idea is that we’re meant to side with Grace, and this has all been a diatribe against the evils of YouTube. Maybe, but it’s doubtful.

And speaking of crowbars to the face, gorehounds will be disappointed to read that, for all it’s potential, Bone Breaker is also a rather bloodless affair. No films need to have gallons of blood flowing onscreen to make it watchable, for sure, but it wouldn’t hurt Bone Breaker to give us something to mitigate the boredom.

Overall, As mentioned up top, there are better interpretations of this kind of scenario that you could track down. On its own merits, Bone Breaker is unfortunately just not worth your time. This one is only for those people who love watching English people yell at each other. And you have soap operas for that, people!