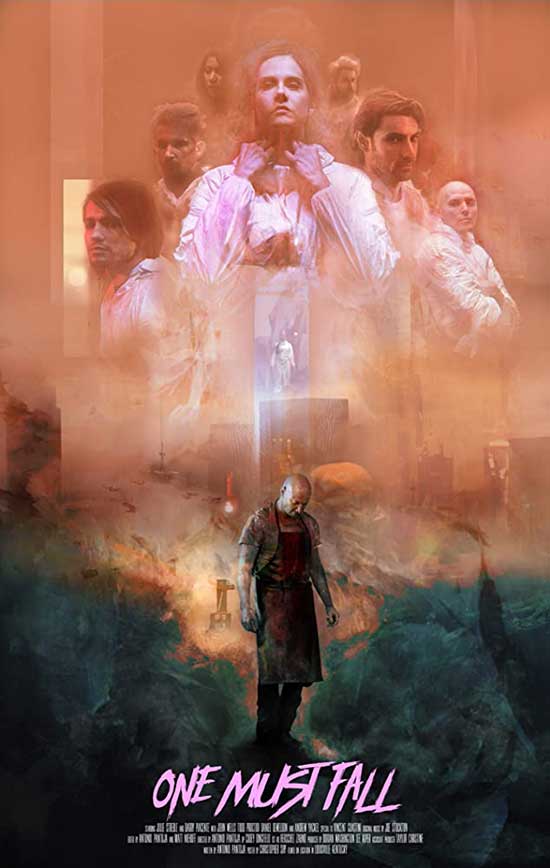 A horror-comedy slasher set in the 80’s about a woman wrongfully fired from her office job and forced to take on a temporary job on a crime scene cleanup crew. With a maniacal serial killer on the loose leaving them lots of work, did he ever leave the scene of the crime?

Ah, the old 9 to 5. You know how it is. You work your butt off seven days a week and what’s your reward? Your boss sexually harassing you to the point where you end up having to take a job cleaning murder scenes. We’ve all been there, right? #grrrmondays. Well, maybe we don’t all know how that feels, but it’s certainly something Sarah (Julie Streble) can relate to in One Must Fall, written and directed by Antonio Pantoja.

It’s the mid-80s and whilst the city reels from yet another horrific murder, Sarah is trying keep her head above water at her job, and her boss’ hands away from her. When Sarah spurs one too many of his advances, she finds herself accused of insider trading and kicked out without so much as redundancy pay. Needing to pay her bills and support her daughter, Sarah signs up for a crime scene cleaning crew, who have all spent too much time around bleach and blood.

Ostensibly a comedy, One Must Fall mines a lot of its humor out of not only the microcosm of day to day life in the office, but also the way a group of desensitized people react to dealing with bodies on a day to day basis. When Sarah finds one of her new colleagues eating a ham sandwich over a cadaver, his first reaction to her revulsion is that she’s likely a vegan. It’s all pretty funny stuff, with perhaps one of the biggest laughs coming from a cameo by the one and only Lloyd Kauffman. I didn’t think I’d be a man who would laugh at genital mutilation, but here we are. Thanks, Lloyd.

The problem with One Must Fall is that it quickly loses its quirky edge once it falls into stock standard slasher movie tropes. As I said up top, there’s been a murder in the city and the perpetrator is looking to add some more notches to his bedpost. Or should that be more notches to his deadpost, boils and ghouls? No, you’re right. It shouldn’t. 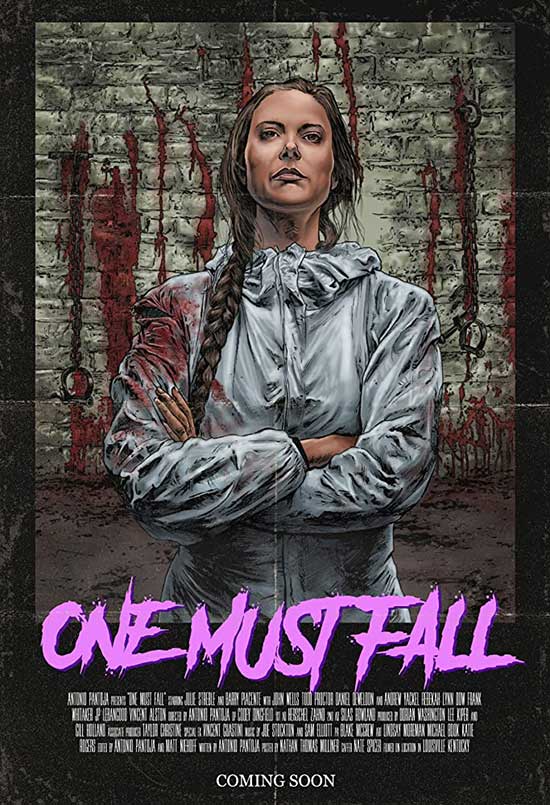 Regardless, once The Killer (Barry Piacente) enters the scene, trapping Sarah and the rest of the clean-up in the building of their latest job, One Must Fall stops being fun. Sure, it’s gory. Sure, there will be blood. Sure, it’s a comedy horror so you’d want a little of bit violence. However, the tonal shift from comedy to horror is so swift it’ll break your neck. And there’s the clichés. So many clichés. Okay, so your film is set in the 80s. That doesn’t mean we have to throw up a Friday the 13th greatest hits collection. It’d be a lot more interesting to see what Pantoja could have done if he’d maintained the same absurdist tempo he’d used in the first half of the film. It’s telling that when the film returns to its office-based scenery in the film’s epilogue, you realize how much you missed the film’s original irreverence.

Performances are fine and the soundtrack will get the toes tapping, but there’s the feeling that it could all be a bit more satisfying. A bit more consistent. Perhaps, if this was thrown out to a rabid midnight showing, the (somewhat inebriated) audience would lap it up. Taken at face value – and sober – there’s very little here to stick around for once the laughter stops.

One Must Fall breaks no new ground when it comes to slashers movies, and this is compacted all the more when the first of the film shows so much promise. An entertaining disappointment, if you will.