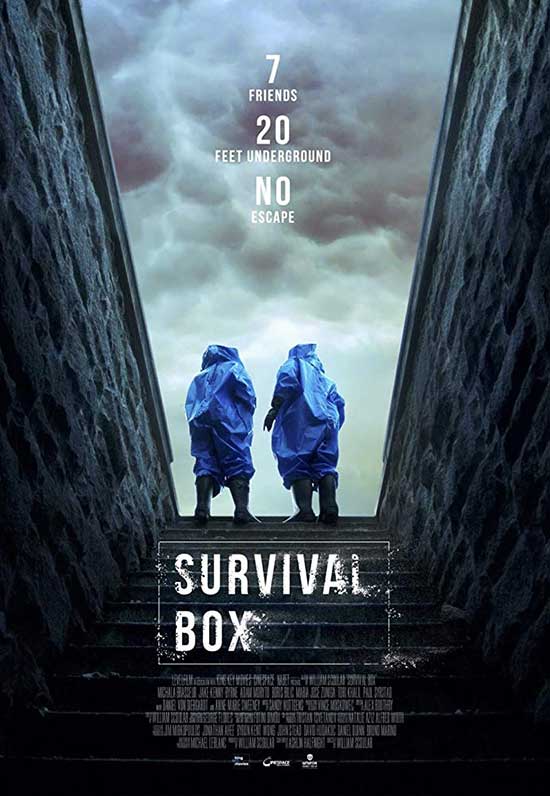 Rich high school graduate Chris is bored with his everyday life, so he decides to have a party in his family’s underground bunker. Ignoring the news reports on the tv about nuclear war possibilities between the US and North Korea, he holds the party with no concerns. After most of the crowd disperses, the bunker goes temporarily haywire. With many unsuccessful attempts to reach the outside world fail, the seven remaining party goers realize that the world as they know it is gone. Without any more information, they prepare to survive in the bunker for as long as they can.

Contrasting with a lot of other post-apocalypse films, the characters in the film get straight down to the business of survival. Each one is assigned a post to take over and that is what they do. Most of the problems that arise between the group are taken care of quickly, and rarely with violence necessary. While I praise the new approach to the genre, it doesn’t make for an interesting narrative. There are so many scenes that are so mundane that it was hard to stay attentive at points. Although the movie is about survival, it’s difficult to add tension when the supplies are supposed to be able to last for months. And why do so many movies think it’s a good idea to add dream sequences? It seems like the filmmakers just wanted to add some different visuals to the movie, but all it does is waste time without adding anything to the plot.

Perhaps it was an attempt to show how bad the situation had changed them, but there was an inconsistency with the characters that became really annoying at points. Chris (Paul Syrstad) starts as a spoiled if thoughtful sort of person, and then he attacks another girl violently when he thinks she’s stealing supplies. Kit (Maria Jose Zuniga) is the closest that the movie has to an antagonist, with part of the reason being that she is running out of antipsychotics. Though some of the characters seem to know who she is, we don’t know how.

She just shows up and becomes the voice of negativity for the group. At one point Kit finds a gun that she uses to threaten another character who is panicky and belligerent. The scene is supposed to be tense, but I’m not sure why she is supposed to be so angry. Aside from the character Scott (Adam Moryto), it doesn’t feel that anyone knew how to project anger. All of the scenes in which a character was mad felt awkward, with lots of frowning but hardly any actual emotion. 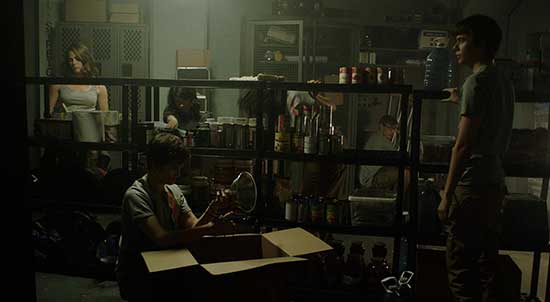 The movie does have its good moments as well. It takes forty-five minutes to really get to them, but the movie does a good job with pushing the emotional envelope. While no one knows how to act angry, they certainly have learned how to act sad. Chris in particular has to deal with two major emotional punches, and his actor does a good job at conveying how devastating the situations are. Travis (Boris Bilic) does a fair job as the comic relief character, just trying to get everyone to feel better, and Scott is one of the more believable, if not necessarily likable, characters in the film. While the ending drags on a bit long with a battle between Kit and Camila (Michala Brasseur), Kit’s show of insanity is both creepy and realistic. The ending itself was not terrible. I had honestly expected a sad ending to the whole affair, but while it wasn’t happy either, it at least was a bit more hopeful than other nuclear apocalypse movies. 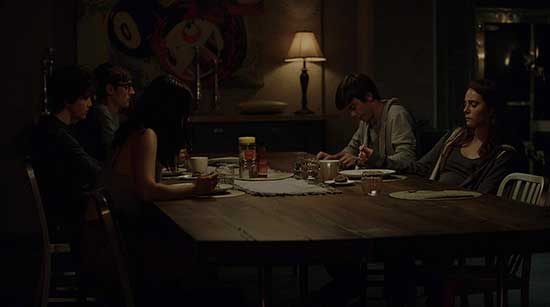 Survival Box isn’t the worst movie I’ve ever seen, but it suffers from being completely unmemorable. Once the movie was over, I realized that I couldn’t remember even one single character’s name off the top of my head. This movie doesn’t get a recommendation. In an odd way, it would have been better if the movie had just been bad, at least I could say that I would remember it then.