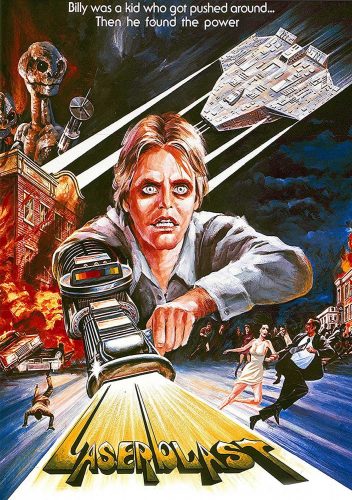 A young man walking through the desert encounters a pendant and oversized lasergun that gives him the power to destroy.

Michael Rae’s Laserblast (1978) is one of the most enjoyable and best “worst” movies I’ve ever seen. Long a staple of 16mm syndicated television airings on independent channels it’s a ridiculously delightful slice of Southern California/cheesy science fiction shenanigans filmed during 1977, the same summer that George Lucas’s Star Wars blew our socks off. The first thing that strikes the viewer who knows anything about the cast of this film is the high number of people featured who have sadly passed on, most of them when they were very young.

Kim Milford plays Billy Duncan, a meandering twenty-something who wanders into the California desert and discovers a ray gun and metallic pendant left behind by two stop-motion aliens who land at the film’s start. Milford is the blonde-haired “hero” of the film who was all of 26 when the film was shot. He sadly passed eleven years later from complications due to heart surgery. The ray gun gives him the power to blow up anything and suddenly he feels empowered. Cheryl “Rainbeaux” Smith, the lovely actress whom horror fans know primarily from Lemora, A Child’s Tale of the Supernatural (1973) and who appeared in numerous low-budget gems during the 1970’s, plays his girlfriend Kathy. When Billy goes to visit her, her grandfather (Keenan Wynn) shoos him away. Smith passed in 2002 at age 47 from hepatitis and Wynn passed nine years later. Then, if you can believe it, Billy is bullied by two fellow students, one of whom is none other than Eddie Deezen! Deezen is still, thankfully, still with us, bringing charisma and charm to just about any film he appears in. He’s gawky and goofy as Froggy in Laserblast and with cohort Chuck (Mike Bobenko) he attempts to rape(!) Kathy at a pool party until Billy tries to beat them up. Dennis Burkley, another favorite character actor who was hilarious on the short-lived Sanford TV series (1980-81), plays a cop who gives Billy a hard time. Burkley passed away in 2013 at age 68. In a nice bit of revenge play, Billy uses the laser gun to try and destroy Chuck and Froggy’s car with them just barely escaping. This is one of the funnier bits in a film which runs the requisite 90 minutes yet never feels like three hours.

Laserblast is a film that, while fun, suffers from some missed opportunities. The gun and the pendant that Billy comes into contact with give this ineffectual “nobody” a sense of power but we really don’t know much about him to begin with to even care about his character arc. The performances are all fairly substandard, even Cheryl Smith’s turn as Kathy. Smith, whom genre fans loved in the sexy Cheerleader comedies of the 70’s, is passable her but she has such a sweet, good-girl quality that you just can’t help but like her.

The special effects aren’t bad for a film of this budget and they give Laserblast a nostalgic Land of the Lost feeling. There are lots of shots of cars blowing up in slow motion. The bad sci-fi films from this era possessed a lot of heart, something that is sorely lacking in the bad movies made nowadays. For those of us approaching fifty, this film is chock full of great 70’s remembrances just in the way that life was slower and

Laserblast was originally released on DVD in 2000 by Cult Video, in 2008 in a Mystery Science Theater 3000 edition, and in 2013 by Full Moon Features. Now, Full Moon has released the film on Blu-ray and it’s a step above all previous releases. The film has been transferred from a 35mm answer print as the original negative is considered lost. For the uninitiated, an answer print is the first version of a motion picture that is printed to film after the color correction is completed. Basically, it’s the first version of a finished work when the movie is printed to physical celluloid as the sound is married to the image. This is probably the best that we’ll see of Laserblast. In addition to the sparkling new transfer, the Blu-ray sports a really fun and engaging feature-length audio commentary with Charles Band and Richard Band who reminisce about the making of the film.

The score is by Richard Band and Joel Goldsmith, the son of non-other-than the late and renowned Jerry Goldsmith. It’s a nifty musical score, one that you can buy on CD here.