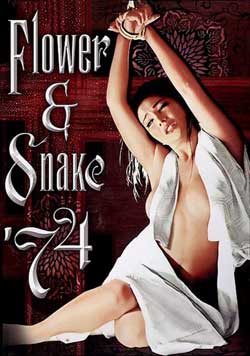 Suffering from a childhood trauma, Makoto has been impotent ever since witnessing his mother getting it on with a big, black American soldier. This is probably just as well, since his mother employs a small crew to make movies and take pictures of women in bondage in the basement. Upon discovering some of these pictures, Makoto’s elderly boss decides to assign him the task of “training” his younger wife, Shizuko, who does not give him the attention he needs. When Makoto and Shizuko develop feelings for each other, they risk incurring the jealous wrath of both his mother and her husband.

The first major adaptation of a novel in Oniroku Dan’s popular series, Flower and Snake is the film that launched Japanese studio Nikkatsu’s long line of S&M softcore. Naomi Tani, a close friend of the writer, became the studio’s S&M queen on the strength of this film and many more like it, often adapted from Dan’s books. While he clashed with Masaru Konuma over the director’s interpretation of his work, the film’s success was a pivotal moment in both careers.

Lead actress Naomi Tani leaves her mark all over this film though – and that’s not just a reference to the forced enemas her character is made to endure. Recognised for her professional dedication, Tani willingly submitted to a plethora of S&M-style abuse throughout her busy career, which officially ended at the close of the decade. She spends much of her time in Flower and Snake tied up, often suspended from the ceiling – and it can’t have been too unpleasant for her, because she promptly reunited with director Konuma that same year for the similarly themed Wife to Be Sacrificed, Nikkatsu’s biggest hit of 1974.

There is much to keep the viewer entranced throughout Flower and Snake. Overflowing with sleaze, yet matched every step of the way by the kind of artistry and visual flair that typified the major studios’ exploitation output of the era, it would be hard to find something to match it in the West. European softcore classic The Story of O or American emperor of erotica Radley Metzger’s The Image (both 1975) cover similar territory, but the outrageous yet tightly controlled atmosphere of Flower and Snake is unmistakably, uniquely Japanese.

Despite a handful of sequences accompanied by a jazzy lounge score that stands up next to the celebrated Italian product of the day, much of the drama is underscored by silence, which has a sobering influence on the titillating material. There is also a strain of subtle humor throughout the film that never balloons into slapstick. This is of course embellished by the perverse actions and tasteless remarks of each and every character in the film. A scene where Makoto frantically practices his rope skills on an inflatable doll gives way to his boss beseeching him not to forget to give his wife an enema – and photograph her while she’s emptying her bowels. Uncharacteristically, it is hard not to notice the traces of a wicked smile that flickers across the face of both actors.

Makoto’s smut-peddling mother is no less an important character in the story. Since his memory of her fevered indiscretions is the cause of his impotence – until his involvement with Shizuko finally breaks the spell – his mother is determined not to cede her dominance over her son. Wielding an enormous rectal syringe, she assures him that “no matter how beautiful she may be, she shits.” This is naturally confirmed later in the scene, with the added discovery that Makoto is so turned on by the deed that he needs nothing more to inspire him to mount his captive and say sayonara to his impotence once and for all. He even shares his good fortune with Shizuko’s husband, bringing him some of her stomach salad in a sealed container, as if he were delivering a packed lunch. 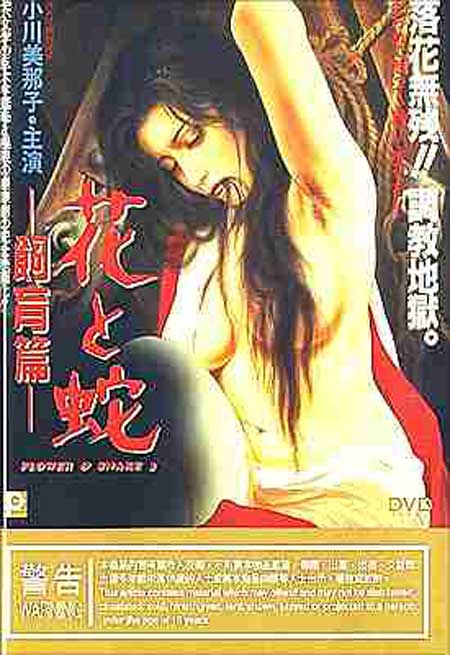 As with many films that attempt to shine a light on these perplexing sexual predilections, by the end of Flower and Snake it becomes apparent who has been in power all along. While the pleasures of bondage and fecal foreplay may be difficult for many viewers to relate to, this did not prevent the film from spawning a long line of sequels and remakes, accentuating its status as a benchmark of pink film. Interest in this kind of subject matter would seem to be catching both onscreen and off; in another aspect of the film shared by many other flowers in the same field, a younger woman observing the extremes to which her peers have been driven expresses her disgust – before indicating that if this kind of behaviour is to continue, it’s her turn next.