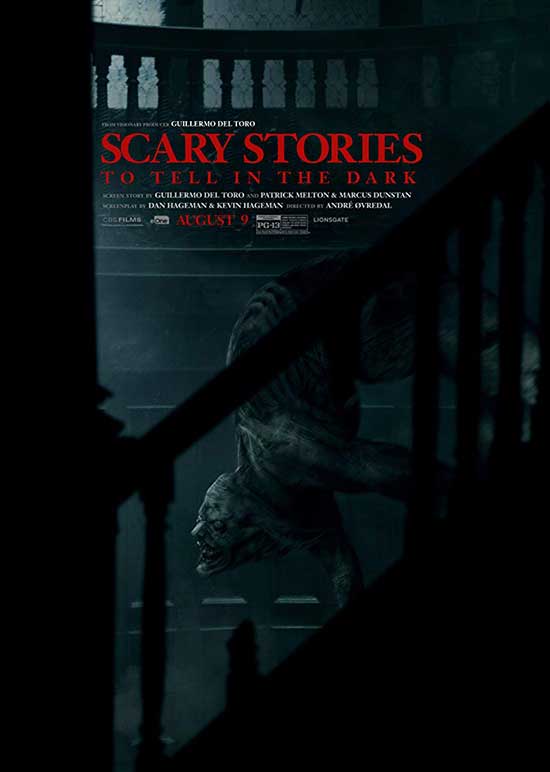 ” It’s 1968 in America. Change is blowing in the wind…but seemingly far removed from the unrest in the cities is the small town of Mill Valley, where for generations the shadow of the Bellows family has loomed large. It is in their mansion on the edge of town that Sarah, a young girl with horrible secrets, turned her tortured life into a series of scary stories, written in a book that has transcended time. For a group of teenagers who discover Sarah’s terrifying home, the stories become all too real in this spine-tingling film.”

Donovan’s “Season of the Witch” plays in the beginning of the movie. Scary Stories to Tell in the Dark is beyond perfect for Halloween. We meet a group of kids who are seeking some havoc in 1968 on Halloween.

Mark Steger playing the incredible Harold the Scarecrow and the Pale Lady. God, if there was a scarier, creepier character that makes you go WHAT THE FUCK is THAT?!!! It is the Pale Lady. It is perfect.

We find this group of friends at the movies watching… wait for it… Night of the Living Dead. Tommy interrupts the friends and he is looking to start trouble. Stella seems to like Ramon. “Stella, she’s not anyone’s type.” This is such a line…. Stella offers up an alternative to get out of the drive-in movie and avoid tears. A haunted house. Who doesn’t love a good haunted house? Wherever they filmed this, it looks like a creepy location.

This house looks like a place that should be condemned. Stella begins to tell the stories. The scary stories to tell in the dark. They start with the Bellows story in the creepy old house. Stella finds the book that belongs to Sarah Bellows. The house is a character in itself, it’s old, dark, haunted and terrifying. The group leaves the house and they find their car wrecked and painted on.

Stella is kind and brings meaningful interaction to the movie. She tucks her father in, she offers Ramon a sofa to crash on. Ramon and Stella have the “I want to be a writer” conversation. It is always a difficult conversation. Those who write and know, tend to just write. You feel that urge, you constantly hear the stories running through your mind.

Stella took the book home with her. Oddly enough after reading some of it and seeing some of the names, she gets to end and it is empty. It gets weirder, don’t fret.

Tommy meets the Scarecrow, a menacing scarecrow and we see Stella reading exactly what is happening with Tommy and the Scarecrow. This Scarecrow is one of the creepiest, coolest Scarecrows ever. Mark Steger does an incredible job.

If you have ever been in a corn field, it is not the most pleasant feeling. Corn mazes alone can be creepy and corn fields at night. Well, it isn’t a place you just want to spend some quality time. The Scarecrow Harold seems to be moving all around the corn field and Tommy doesn’t think anything of this. (I would have hauled ass out of there.)

Harold’s mechanical, rather fast walking and twitching branch-like movements make him even creepier and cooler. Tommy met the wrath of Harold the Scarecrow. Tommy turns into a Scarecrow and the special effects in this movie are insanely good. The stories appear and Stella is explaining this to her friends. Ramon is being questioned about the disappearance of Tommy.

Stella and Ramon show up to check if they can find Tommy. This movie reminds me of Hitchcock and The Twilight Zone, Are You Afraid of the Dark. It is well written and the cast is incredible. The stories and creepy characters causing havoc in the film are a breath of fresh air. (“Butt pimple,” what a phrase!) Stella’s room is covered in horror/scary movie posters. The book has also returned and is creating a new story before Stella and Ramon’s eyes.

This story involves Auggie. Stella tries to warn Auggie not to eat but… he does anyway! WHY? WHY? WHY? Put the “stew” down! “Who took my toe?” OH GOD! Get out of the house dude! RUN! This is a fun popcorn movie to watch with friends. It is one of those movies that you can watch any time but Halloween sure makes it fun.

The under the bed point of view was horrible. I was waiting for the worst to happen. And, it does. “Halloween’s over.” “This is a joke.” Sometimes terror comes at all times. It doesn’t just visit on Halloween, Mischief night, the Devil’s night. Horrible things happen all year long.

They try burning the book. It won’t burn. Like any teens seeking out the unknown, they head to check out old newspapers, books, reference things that happened. Sarah Bellows (Kathleen Pollard) is sure causing a lot of havoc. The next story is being written. This is so good, so far. The spider scene is CRAZY! The special effects people outdid themselves. We see Ruth (Natalie Ganzhorn) in the bathroom staring with sheer panic in the mirror at her swollen cheek. She is so tempted to pop what looks like a giant angry zit. Please don’t. OH lord. And, whatever it is, it is moving now. This is sort of random urban legends from over the years. This also plays on fears. It is scary and heartfelt in a way.

The teens go visit Lou Lou. The teens have questions and some of us may or may not be checking beds and sofas for spiders. I digress, it is a good movie. A small music box makes Lou Lou speak up. Stella tells Lou Lou they have the book.

Stella wants to know how Sarah is still writing the stories. Lou Lou explains. The kids head to the hospital in search of records now. Stella and Ramon find the records in the R.E.D. room. The records evaluation depot. Her own brother put her away. Chuck is being chased in his own red room in the hospital. The book is writing and the Pale woman shows up. I have watched so many horror films, mysteries, thrillers, you name it.

I have NEVER seen a character like this. Once again the special effects and make-up people should smile because THEY DID GOOD. This character is so good, you cannot look away yet it is scary and makes you kind of go, what the f*ck!? She is hugging Chuck to death and sort of consuming him. Stella finds his pen on the floor.

Stella calls her dad and tells him, she is afraid she will die. He wants to help so she doesn’t. This is sad in so many ways. She picked up the book and all hell broke loose. Ramon’s story is not being written. This is intense. I feel like I need a blanket and a pillow. “Stop her.” Is it too late to get away from this awfully flexible, killer character? Andrew Jackson is the voice of Jangly Man.

Stella is part of the last story. They are back at the house. This insurmountable insanity of what is happening shows what could have happened to Sarah, but it is happening to Stella. Stella reverses the role and she is telling the story now. The actors do great at showing how scared they seem. If they weren’t scared, they did an extra-good job. Stella gets through to Sarah. We see some tears, is she acting?

Sarah hands over the ink pen so Stella can write the true story and stop all this. This is nerve-wracking. Will Sarah let them go? Will she forgive them? You have to watch this movie. “Stories hurt, stories heal.” Those words are so true. We tell stories in different ways, different aspects. Some may sound the same or even be the same. Some stories may be from the same urban legends. Stella is now writing and telling Sarah’s story. She is winning awards. She knows how to tell a story.

Writing is impactful. It is something that no one can take away. Stella is also joined in a weird way by Sarah. Will Sarah help bring her friends back? I officially have goosebumps.

This movie was great. It shows imagination, good writing, scary characters, eerie, divine madness and what happens when writers go to work full-force.

The shots, images, music, eerie sounds and the songs chosen are perfect. This film was good. You need to watch it.