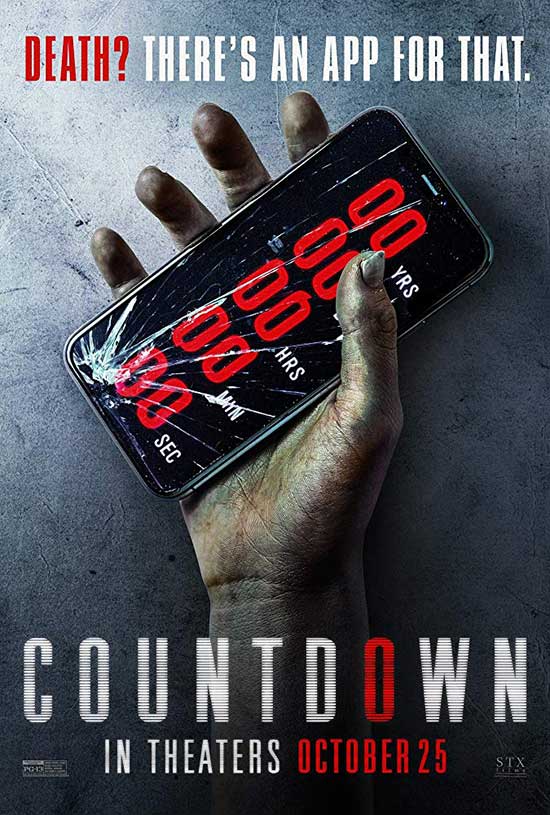 When a nurse downloads an app that claims to predict the moment a person will die, it tells her she only has three days to live. With the clock ticking and a figure haunting her, she must find a way to save her life before time runs out.

Would you want to know the exact moment of your impending death? If so what lengths would you go to in order to prevent it? These are questions asked by the 2019 Justin Dec directed movie Countdown.

Events kick off with a pre-credits sequence in which a group of teenage partygoers discuss the merits of a new phone app that promises to provide the user with a real time countdown on their mobile showing the exact time left until their demise. Of course this being a horror movie they all install the app (the lesson being kids, read the user agreement terms and conditions!!) and before long those deaths start to happen in alarmingly short order; a teen called Courtney being the first victim, while her boyfriend Evan appears to have escaped for now.

Once this sequence and the credits are out of the way, we meet up with Evan again – in hospital following a car accident this time, and being cared for by young nurse Quinn Harris. Evan is clearly in a state of panic, explaining to Quinn about the Countdown app which he also downloaded on the night of Courtney’s tragic death; unfortunately for him the app is telling him he’s due to shuffle off his mortal coil at precisely the same time he is scheduled to go into surgery…… Quinn is understandably sceptical, but nevertheless in a fit of curiosity decides to install the app on her own phone. 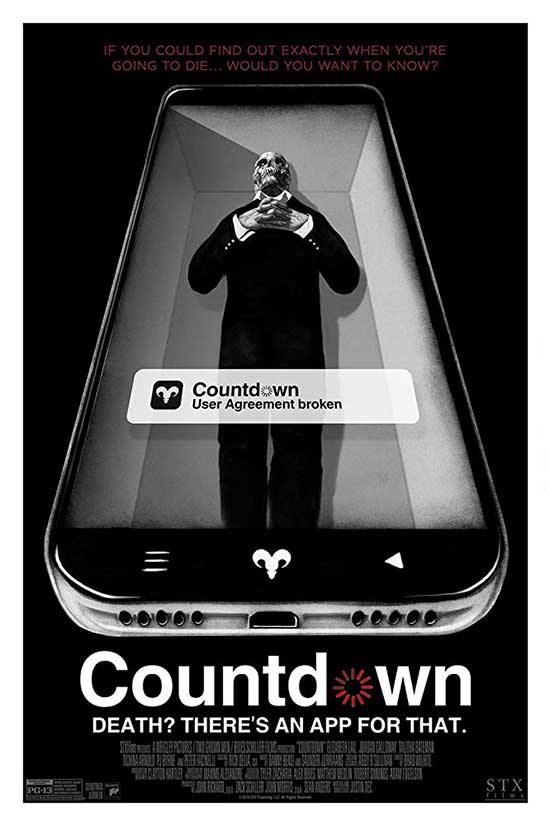 Evan meanwhile has decided to go AWOL for his surgery, thinking he can cheat his impending Countdown; the app has other ideas though, and after receiving a message that he has violated the “user agreement” has an impromptu meeting with his late girlfriend Courtney – and she looks decidedly unhappy to see him. Things rapidly take a turn for the worse for Quinn once her newly installed app informs her that she has just two short days left to live; and when Evan turns up dead just as his Countdown predicted she decides that urgent preventative is in order. 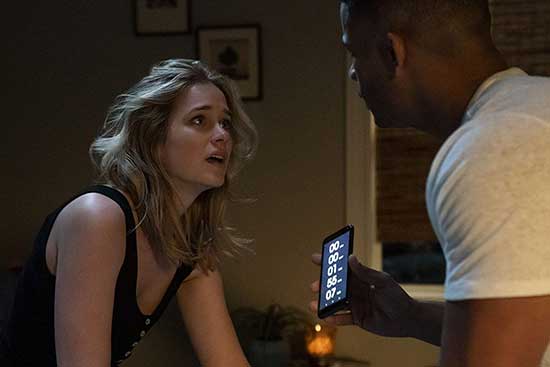 If Countdown as described so far sounds formulaic, it’s because it is to be honest; there aren’t any major surprises plot-wise during its lean 85-minute runtime. However don’t let that put you off giving it a watch, because while it does borrow from lots of other movies (it’s pretty clear the writers were familiar with the Final Destination and Paranormal Activity franchises at least, and even Sam Raimi’s Drag Me To Hell) it’s nevertheless a witty, likeable movie in its own right. While there are jump scares liberally scattered throughout, they aren’t particularly groan-inducing or telegraphed and they are balanced by some effectively creepy scenes (for example a sinister black Death-like figure, menacingly watching the panicked characters from the shadows, is briefly glimpsed in some unusual locations before disappearing), and the film has a very self-aware sly streak of black humour throughout which works in its favour.

The main actors carry their roles off well, including Elizabeth Lail as Quinn and Jordan Calloway as potential boyfriend Matt Monroe (not the singer). Some genuinely funny comic relief comes courtesy of P.J. Byrne as Father John (best described as a priestly demonology geek, complete with crucifix tatts) and Tom Segura as Derek, a sarcastic sleazebag of a cell phone store manager. The movie’s premise is pretty daft and it knows it, keeping its tongue firmly in cheek throughout.

That said the movie is well acted, nicely shot and directed; the characters you are meant to care about come across as likeable thanks to decent performances and good chemistry between the two leads. It works pretty well as a modern update on the demonic curse legends of old, as long as you don’t pick too closely at the seams of the movie’s logic. Special effects, once malign entities start to show up, are predictably of the generic CGI sort but are used sparingly, and there are some decent kill scenes scattered about; it’s never scary but does maintain a nice creepy atmosphere. While it shares enough traits to be categorised along with some of the more lame teen horrors of late, it’s a cut above most of them and is a pretty entertaining watch overall.

Countdown is now available on blu ray per Universal