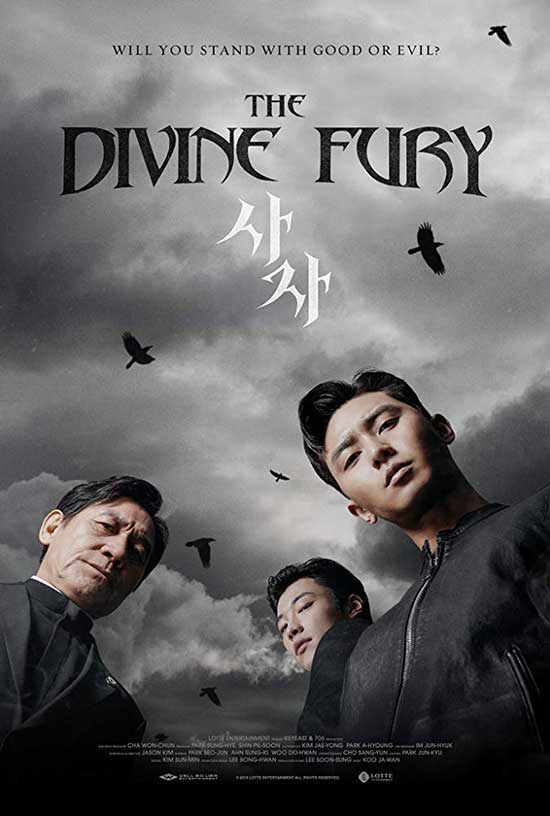 After his success with the 2017 action comedy Midnight Runners, the director Joo-hwan Kim is back with another action-packed offering, this time mixing horror with martial arts. While the idea of an exorcist kicking the devil’s ass with his bare hands might sound like a fun premise, unfortunately The Divine Fury never really delivers on either action or horror fronts, leaving one wondering how something so full of action and demons of all description, be so incredibly dull?

In the centre of the story is a young man named Yong-hoo (Seo-joon Park), who after losing both of his parents at a very young age, lost the connection with his Christian roots as well as his faith. Jump forward couple of decades and Yong-hoo has grown up to be a successful MMA-fighter, yet he is still struggling with his relationship with Christianity and belief. After stigmata mysteriously appear on his hands in middle of a transpacific flight Yong-hoo decides to consult a local shaman, who tells him that he is surrounded by demons, prompting him to seek further advice from a man of the cloth. Enter Father Ahn (Sung-ki Ahn), a local catholic exorcist who luckily is not a stranger to the more uncommon religious incidents and after some bonding around a few beers and some light exorcising, the two form an unbeatable exorcist team, kicking ass literally and spiritually.

With a few exceptions, historically I have not been a fan of Christian themed horror and The Divine Fury is no exception. After reading the plot description and taking a quick look at the trailer, I was willing to approach it with an open mind, thinking there might at least be some semi decent martial arts to keep me entertained. Well, there is plenty of action for sure, but I can’t really say that any of it grabbed my attention is any major way. One fight scene just follows another but none of it really stick to your mind. Same can be said about the exorcisms, of which there are a fare few. It’s like whoever designed the scenes looked at every exorcism cliché ever made and then kind of run with it. Again, very humdrum and easily forgettable. Even the film’s villain, the ominously named Dark Bishop (Do-Hwan Woo) doesn’t really bring anything interesting to the mix, other than more clichés. His black robes and quite frankly slightly comical satanic rituals just don’t emanate the dread that they should, leaving you thoroughly underwhelmed.

The biggest problem with the Divine Fury is that it doesn’t seem to know what kind of film it wants to be. Mixed with the fast-paced action is more ponderous moments of religious discussion and philosophical questioning, but these two sides of the story never really come together in a united manner, leaving a distinctly muddled after taste in their wake. Had the focus been more heavily on only one of these aspects, we could have possibly seen something a bit more original: either a full on ass-kicking extravaganza with a sole focus on action, or perhaps a character driven thoughtful affair with an emphasis on Yong-hoo’s battle with his faith. Either way, I bet it would have bene better than this lukewarm mess.

The word that jumps to mind first when talking about The Divine Fury is pedestrian. It pretty much perfectly summarises this film. Even all the CGI and flashy cinematography can’t save the sluggishness of the story and the way too long running time of 2h 7 minutes certainly does not help. I can’t with good conscience even recommend it as a leave-your-brain-at-the-door kind of entertainment, as it is not actually that entertaining (full disclosure: it put me to sleep no less than three times, until I finally got through it). It’s not even bad enough to be watched for the purposes of making fun of it. Just find something else and stay away from The Divine Fury.