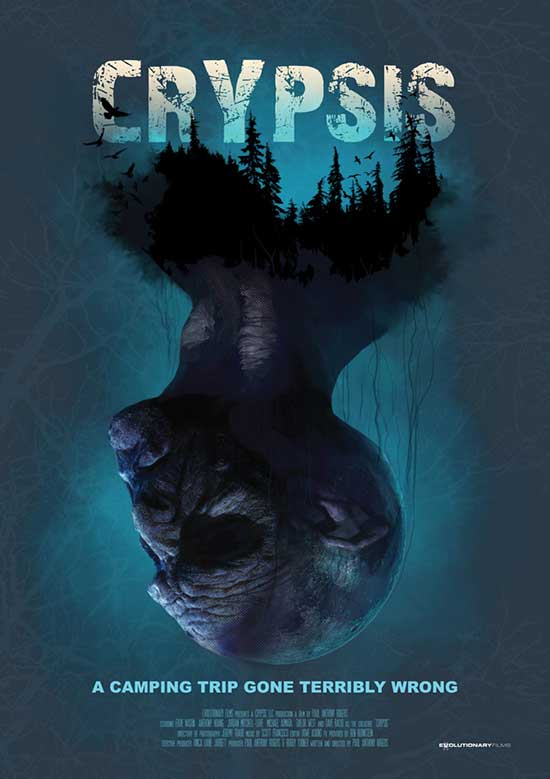 A group of friends make a bet to see who can survive camping on an island for a night. Unbeknownst to them, a strange creature lurks throughout the night terrorizing their every move, and sound is their biggest enemy.

Crypsis is a 2019 movie which centres on the misadventures of six friends, who rather unwisely decide to spend a survival expedition on the mysterious ‘Harker Island’. What they don’t know is that the island is home to something which might just put a damper on their weekend…

Unfortunately for Crypsis, that is pretty much the entire plot; there is little more to the story than that. The entirely male group of friends are all interchangeable dude-brah types with no clear distinctions between them – they are to a man shallow and irritating, as well as being guilty of committing every dumb act possible in a horror film (waving a torch around to show your exact location, shouting at the top of your voice when trying to avoid a creature that hunts by sound etc. etc…… one chap even climbs a tree to around six feet and then is unable to make his way down from these lofty heights for some reason). There isn’t a single remotely likeable character among them, which ultimately means the viewer honestly couldn’t care less whether they end up as monster chow or not.

Speaking of the monster, there is very little in the way of build-up to its big reveal; we see it in its full rubbery glory almost straight away. Much like the movie as a whole, there is nothing original whatsoever in the creature’s execution – it is basically a guy in a suit and mask, the former being a dead ringer for one of the “crawlers” from Neil Marshall’s infinitely superior subterranean horror The Descent, and the latter being almost close enough to an Orc from Peter Jackson’s Lord Of The Rings trilogy to warrant legal attention. We are at least spared the sight of any ropey CGI, but that is most likely due to the movie’s obviously low budget not stretching that far in the first place.

The movie also “borrows” the obligatory camera filter and fish-eye lens effect for the creature’s point-of-view when it’s hunting, from any of the Predator series, Alien 3 and numerous others. Not content with nicking the body suit from The Descent, one scene uses the same trope of a quick camera pan revealing the previously unseen monster leering over a victim’s shoulder. There’s a scene with the off-camera creature ominously circling its victims in the dark, while growling menacingly – used to terrific effect in An American Werewolf In London, not so much here. And there’s a character akin to Ash in Alien/Burke in Aliens, who wants to protect and study the creature for the benefit of mankind instead of killing it; you can see there’s something of a pattern here.

As there is so little tension in the movie, it falls to good-old jump scares to keep us entertained; more often than not these are of the standard fake-out variety as the group stumbles across one another’s path. Oddly, about half way through the movie’s running time there’s a switch from the traditional filmed narrative to a “found footage” style when one of the protagonists suddenly breaks out a camcorder; it then shuffles back and forth between the two styles at random, which proves jarring to say the least. 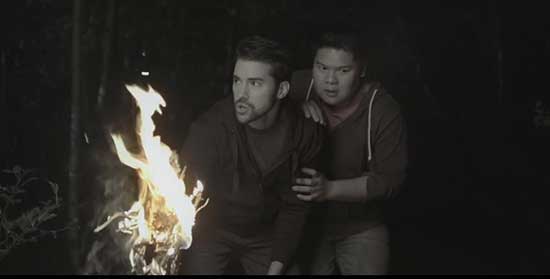 The photography is decent to be fair, and the forest setting is well used at times – it’s just a shame they couldn’t have filmed a better movie in it. The performances range from uninspired to awful, and there isn’t much in the way of gore to liven things up. It’s starting to sound like I watched Crypsis on a bad day, but there really is very little to recommend about it; it comes across as more of a low-rent tribute act to numerous far better movies than a satisfactory watch in its own right. On the plus side it’s only an hour and twenty minutes long, so if you do decide to give it a go it’ll be over quickly at least.