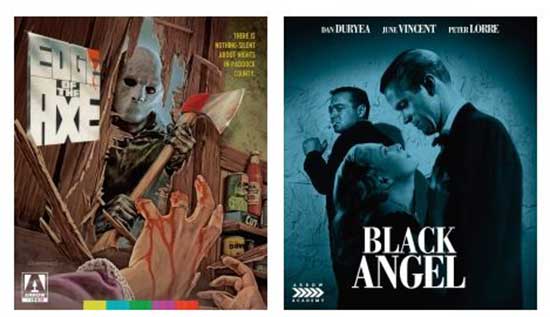 Arrow Rings in 2020 with Cult Spanish Horror and Elegant Hollywood Drama!
2019 was another banner year for Arrow, but 2020 aims to be even better. A new year means more new and exciting releases to fill out your home video libraries. If physical media is dead, the afterlife is one hell of a party. The first releases of 2020 hit stands on January 28th.
First up is José Ramón Larraz’s Edge of the Axe. This Spanish-American slasher follows a masked killer picking off people in a small California village with, that’s right, an axe! Overlooked for years, this new 2K restoration (from the original camera negative) looks to introduce this cult classic to a new audience. The release includes English and Spanish versions of the film, two new audio commentaries, and more.

Also out in January is 1946’s Black Angel. This stunning black-and-white film noir marked the final time behind the camera by prolific director Roy William Neill. After a man is convicted for murder, his wife and victim’s ex-husband fight to prove his innocence. Lost in the shuffle of ’40s noir, and hated by author Cornell Woolrich whose novel served as the source material, Black Angel is a sleek and stylish film that genre fans will surely appreciate. This new Arrow release contains a brand-new restoration of the film and a number of bonus features, including a video appreciation by film historian Neil Sinyard.