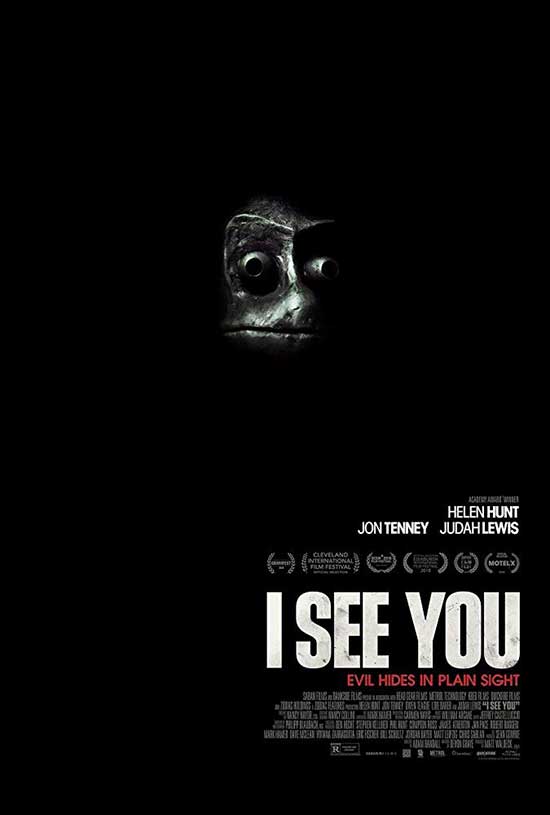 When a 12-year-old boy goes missing, lead investigator Greg Harper (Jon Tenney) struggles to balance the pressure of the investigation and troubles with his wife, Jackie (Helen Hunt). Facing a recent affair, great strain is put on the family that slowly gnaws away at Jackie’s grip on reality. But after a malicious presence manifests itself in their home and puts their son, Connor (Judah Lewis), in mortal danger, the cold, hard truth about evil in the Harper household is finally uncovered.

Directed by Adam Randall and written by, Devon Graye. I See You is beautifully shot. The opening scene, a peaceful town and happy people. Happiness may be an illusion though. A kid riding his bike through the woods is thrown like a rag doll. Already, this movie has you on edge. It is always different when you don’t see or know what is doing the killing/attacking in a movie.

Jackie Harper (Helen Hunt), Greg Harper (Jon Tenney), Connor Harper (Judah Lewis). Jackie is making breakfast. It was fascinating to see Helen Hunt in a film like this. She did an incredible job portraying Jackie. Connor is a typical angsty teenager. They are making conversation over breakfast. Greg (Jon Tenney), the dad pops up. He must be in the dog house AKA the couch.

The shots in I See You are great. There is an eerie feeling with the house in the film. It feels like a character as much as the town does. We see a sunflower coffee mug that Jackie was looking for on the roof of the house.

Justin Whitter (Riley Caya) is the kid who was riding his bike and he went missing. Whatever flung him in the air, took him. I always think of the slow burn movies that are tense and often find people thinking that they are losing it. They have a search going on for Justin. We meet Spitzky (Gregory Alan Williams). Jackie is having dinner with her son and he is angry. Something happened in this not-so-happy family. The TV comes on by itself while Jackie is scrubbing dishes. 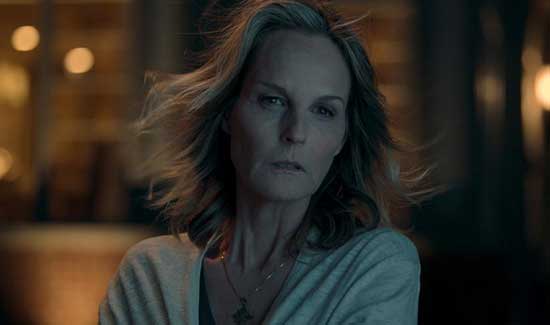 Jackie and Greg are having marital problems. It is sad when you think about relationships. People seem to give up so quickly. The weird stuff happening in the house, they are blaming it on each other. This movie is showing the struggles of trying to keep a family together, trying to maintain sanity. Greg and Spitzky meet with Lieutenant over the missing kids.

They play a clip of an interview with young Tommy and he talks about a “magic house and a man” they will never find. It was great to see Sam Trammell playing Todd. Todd, however is or was having an affair with Jackie. Something hits him in the head. Most likely they will blame this on Connor although he is nowhere to be seen. Too soon, Connor hears something and he is heading upstairs. This house is huge and there seems to be fifty different rooms. For now, Jackie and Todd are in the basement and Connor is upstairs somewhere.

Todd’s phone is calling Jackie’s phone and he doesn’t even have a phone. Like, I said, Connor gets questioned and asked if he was up on the roof? He has no clue what Jackie is talking about. Helen Hunt is doing a great job with this character. There is a psychological essence to this movie. It is slightly maddening to wonder what is attacking people, taking them, changing them and, moving things around. The woods scenes are creepy.

Greg and Spitzky are in the woods now trying to figure out what happened to Justin. Spitzky kinds a wire attached to a tree, so it could be a person? Meanwhile, Jackie comes home to a dead Todd. She tells Greg and asks for his help. They are losing it and its scary as Jackie tells Greg she thinks Connor hit him. This is mind-boggling not knowing. Now, a murder cover-up because why not add one more thing to the list.

It feels as if it is something to do with the house or someone that lived in the house. I am not a professional in the paranormal but I’ve had my fair share of experiences. Now we are dumping bodies. This is going to get worse. It isn’t bad enough now; it is going to get worse. Jackie and Greg are on an excursion in the woods and it isn’t for a picnic. Connor found the silverware. WOW. I got goosebumps. Helen Hunt and Jon Tenney are great in this film. Now we are learning about “phrogging.” (Did I Google this? Yes, I did.)

And screaming at my laptop still doesn’t help as a person, A PERSON is standing in Connor’s doorway wearing one of the creepiest masks ever. Humans are always scarier. Jackie finds Connor tied up in the bathtub. This is just getting creepier. It was creepy when you thought it could be a malevolent spirit but nothing beats a human being. Greg hears the record player now as Jackie did earlier and now the masked person has an axe.

Mindy (Libe Barer) and her camera toting friend, Alec (Owen Teague) seemed to have broken into Jackie and Greg’s house? They are walking around and filming. Rummaging through things in the house. Mindy explains it is a documentary about “phrogging.” Apparently, you have guests living in the house that you don’t know about. HOW DO YOU NOT KNOW SOMEONE IS IN YOUR HOUSE???? Alec and Mindy fell asleep in the house and “the family” came home.

Alec has that I may or may not be a serial killer thing happening. He lets Mindy sleep and he is on the move now. Moving FREELY through the house while everyone sleeps. Jackie, Greg, Connor. HOW? You have films like The Strangers: Prey at Night where they show up to the house, but they weren’t camping out in the attics and guest rooms. What Lies Beneath (2000) with Michelle Pfeiffer and Harrison Ford was a slow burn/slow moving movie that was tense and scary like I See You.

The actors seem to make slower movements and it causes a tension. Sort of as if someone is silent in a movie and just stares or causes chaos without saying anything. It is creepy. Meanwhile Mindy and Alec are living the dream. We found the silverware thief. Owen Teague (It, Bloodline, Black Mirror) looks so different in every film, he is definitely great with the character work. They still have found out who took the kids. Mindy is reading the news on her phone about the missing kids.

The flash backs to what happens and watching Alec creep around the house. Alec stayed under the bed after locking Greg in Connor’s closet. Alec is the creepy in this film. Alec doesn’t think phrogging is enough, he wants to do a little terrorizing. Mindy and Alec talking upstairs, that’s what Connor heard earlier. Alec has that bad guy routine down, he is bad but like most villains and bad people, they will never admit or come out and say they are bad.

There is an uncomfortableness about this film. The fact that someone is in the house and these people stay asleep while all of this happens. Did Alec kill Todd? Well…. Alec isn’t the only disturbed, could be bad person in the house. The kids are still missing, Mindy sees something she shouldn’t have. (phrogging is a bad idea, don’t do it.)

Back to the woods. So many secrets and odd behavior. This movie is insane but, in a good way. The suburbs man… MESSED UP! Joe Dante tried to warn us all. Greg makes Alec seem okay now. There is a fight. Greg sure has a vivid imagination. This was a different story and the writer did one hell of a job. Things are never as they as they seem. No one is perfect, everyone has secrets. This film was is a must watch.

The ending is so unexpected. YOU NEED TO WATCH IT.