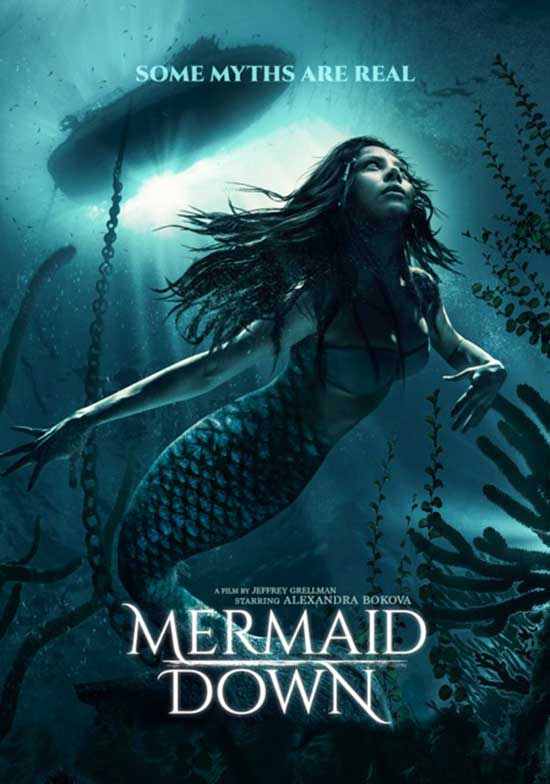 A mermaid is ripped from the Pacific, her tail is chopped off and she’s thrown into a mental home where no one believes she is a mermaid.

What does a mermaid, a ghost in a mental institution, and a sadistic serial killer have in common? Watch the recently released, low-budget, horror flick Mermaid Down and you will find out. Intrigued? Don’t get your hopes up too much. While the movie kept me entertained during it’s full 91 minute run time, the film (directed and written by Jeffrey Grellman and Kelly Lauren Baker) is full of plot holes and some weak acting that prove difficult to overlook.

The movie begins on a boat with two crusty old fisherman who are deep in conversation about mermaid lore and what it takes to capture and subdue a mermaid. One of them claims that the mermaid’s tail needs to be cut off in the event one is caught and they hatch a plan to capture their very own mermaid. I’m not sure if just sitting out on a boat for several days in the middle of an ocean simply waiting for a mermaid to swim into their net constitutes much of a plan, but little else is divulged here to make you think there was more to it. 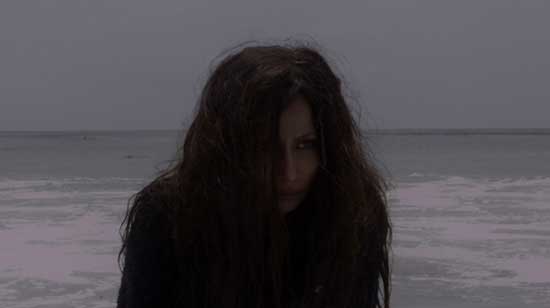 The men manage to actually capture a mermaid, which they subsequently beat pretty badly and call her names in the process. Not very nice guys. They finally cut off her tail at the torso and it’s around this time we are introduced to the sadistic Dr. Beyer (Burt Culver), who was covertly watching all of this unfold from his boat. One fisherman (the captain) accidentally shoots and kills the other fisherman and Dr. Beyer then kills the captain and takes the mermaid for himself. He keeps her hostage for 30 days while she grows a cocoon and from here her new human legs sprout. We are shown some photos of this process and I did think it was interesting how they portrayed the legs growing from the cocoon in stages.

Here is where things get really weird and a couple twists are infused into the plot. After the mermaid’s legs are fully formed, Dr. Beyer decides to dump the mermaid at a women’s psychiatric facility he runs. The other women at the facility learn she’s claiming she is a mermaid through the aid of Dr. Miller (Phillip Andre Botello) and sign language. That’s right, the mermaid can’t speak, but she knows sign language. I believe there is a loose explanation at some point that she learned sign language by observing pirates, but of course this makes little sense since pirates are not known to be sign language experts. Of course, the other women think she is full of sh*t and one girl even spits on her as a display of her repulsion and refusal to believe the mermaid’s story.

Rather early on in the film the ghost is introduced into the story and we find out that only the mermaid and another woman named June (Caroline Dunaway) can actually see and interact with her. By the end of the movie we find out why June is the only human who can see the ghost. Spoiler* It is because only mermaids can see ghosts and June is part mermaid. Not sure I remember any part of this ability to interact with ghosts being part of mermaid lore? The ghost is never named, but she stays close to the mermaid and helps her throughout the movie.

As the movie progresses we see more and more erratic and hostile behavior from Dr. Beyer and he starts killing off woman at the facility. Turns out he has been doing this for some time and the ghost girl was actually one of his victims. He shakes off questions from other facility staff by telling them the murdered woman get transferred to other facilities. While the staff are a bit uncomfortable with this explanation, it doesn’t really go any further than that.

The film picks up when the mermaid escapes from the facility with some of the other women and finds a pretty nasty looking swamp to swim around in for a night, which is assumed enables her tail to grow back. At that point the other women realize the mermaid has been telling them the truth the entire time and Dr. Beyer decides they all need to die to keep this discovery under wraps. By the end they are all trapped in Dr. Beyer’s sinking boat and end up killing him (sort-of) and escaping the boat. The mermaid thanks all the women, reveals that June is part mermaid, and swims off into the ocean.

Mermaid Down did a good job in keeping me watching until the very end and I was impressed by the unusual storyline and creative writing. The music and sound effects were also well done and the special effects weren’t bad for a low budget movie. However, the acting was not great and the plot holes were annoying and distracting. There are so many questions unanswered, such as: Why are mermaids able to see ghosts? Why is the mermaid strong enough to crush bones, but can’t escape from a straight jacket? How did crazy Dr. Beyer become a serial killer? How did the women at the facility just happen to know where the good doctor keeps his boat? Why is the ghost able to move and pick up objects, but can’t grab the mermaids hand? The list goes on, but you get the picture.

The best actor in this movie was the mermaid and she had one of the hardest roles. While she didn’t have any dialogue since she couldn’t speak, she effectively used other noises and body language to communicate. The rest of the cast also did a fair job, but I think this was all overshadowed by Dr. Beyer’s poor performance. I just did not buy his character as a murderous, terrifying, serial killer. I think they were trying to project him as a throwback 80’s yuppie, egotistical, American Psycho type of villain; however, some of his lines and the bland acting ruined this image for me. At one point when a staff member was fighting with him, Dr. Beyer asks, “Well, what’s your diagnosis?” Insert eye roll here. There is a lot of dialogue like this that is just over top corny and takes away from the movie.

Again, Mermaid Down did a fine job of keeping me entertained and interested in how they were going to tie the story of the mermaid, the ghost, and the serial killer together. Having said that I think there were just too many story narratives going on in this film. The addition of the ghost girl was creative, but the story could have easily been told without her and this probably would have helped to lessen all the unexplained events and holes in the story. I also would have liked a different actor cast for Dr. Beyer as the crazed psychiatrist/serial killer. His acting was a bit wooden and he just wasn’t believable. I think better casting for that role would have improved the film dramatically. My final thought is if you have nothing else to watch on a Saturday night and you can handle plot holes and unexplained events in the movie without getting too annoyed, then give Mermaid Down a watch.