“Troubled college freshman Luke (Robbins) suffers a violent family trauma and resurrects his childhood imaginary friend Daniel (Schwarzenegger) to help him cope. Charismatic and full of manic energy, Daniel helps Luke to achieve his dreams, before pushing him to the very edge of sanity and into a desperate struggle for control of his mind — and his soul.”

Luke (Griffin Robert Faulkner) has an imaginary friend. A lot of people will tell you that kids have “imaginary friends.” Daniel (Patrick Schwarzenegger) is the imaginary friend. He is a different level of friend. This movie isn’t hokey. There is some insight when you go through trauma as a kid and then you grow up, it may or may not be dealt with.

The beginning of the movie shows what looks like space. It is a thought maybe? What is in our minds? There is a shooting. A horrible shooting in which sadly, in our daily society horrible things happen and sometimes they are not dealt with. They flash to Claire (Mary Stuart Masterson plays her so brilliantly.) fighting about being on her medication. Luke sees the aftermath of the shooting after wandering out of the house. His parents are fighting and Daniel becomes his saving grace.

Luke spends all his time with Daniel, invites him to dinner. Claire invites him too, the hilarious way a lot of parents /people will talk to an imaginary friend of a kid. Claire doesn’t want Daniel to hang around anymore after giving Luke a “good idea,” that is well, NOT A GOOD IDEA AT ALL. He dumps all of her medication into what looks like her smoothie. She is sick and frustrated now. She wants Daniel gone after Luke blames Daniel.

“No more Daniel.” Daniel doesn’t look thrilled. Claire wants Daniel locked up in grandmas doll house. Mind you, this a creepy doll house. The doll house is also a space in Luke’s mind that he will also have to lock away and forget about Daniel. It goes on for a while and they flash to an older Luke (Miles Robbins). Luke goes home after being away at college. (That is how appears, he is away at college.) He takes sandwiches home to his mom. Claire seems a little lost, she is working on something. She doesn’t seem to be okay. Not, “okay” in a psychological way.

Luke heads out looking for fun and well, he finds some disaster. (I had vertigo forever and flashing, flickering lights triggered bad shit.) Luke kind of faints and sees something. The psychiatrist tells him, “It’s common for people to see things that aren’t real. Stress alone can do that. I wouldn’t worry….” HE WOULDN’T WORRY! I’m worried!  Dr. Cornelius Braun (Chukwudi Iwuji) is the shrink. Sex and death is what Luke is worried about… makes sense.

Luke shares that he had an imaginary friend. Luke meets Cassie (Sasha Lane), he runs smack dab right into her. Luke is taking the blanket off of the doll house. He’s opening the doll house, opening his mind.

Daniel Isn’t Real is one of those movies, you cannot stop watching. His mom is having a pretty bad breakdown. She can’t look at her face and Luke is trying to help her but trying to help himself. And all of the sudden in the bathtub minus a rubber duck, Daniel (Patrick Schwarzenegger) appears as his mother is trying to take her own life, Daniel gives him the idea to help him prevent her from doing this. Patrick Schwarzenegger is so fascinating in this role. He plays Daniel with all the character, swagger, fun, and being that you would imagine an imaginary friend to be. Daniel eggs him on, gives him ideas, talks to him about college. He doesn’t approve of his choice of career. 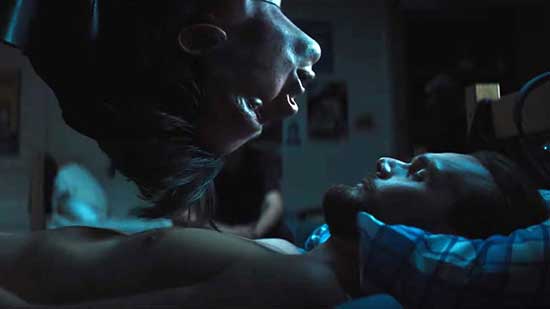 Cassie shows up! She has Luke’s wallet. Daniel doesn’t want her to leave. Cassie uses humor to distract Luke. (It is relatable.)  Where was Daniel during my MATH CLASSES? This movie feels like the REAL dark psychological advancement of Drop Dead Fred.

Luke goes to a party and brings Daniel. He meets Sophie (Hannah Marks) who is studying psychology and Luke is a photographer now. Luke is drunk/wasted/lit (You pick the phrase.) he “fucked” up. What parts of the conscious or subconscious do we keep an imaginary friend? Do we all have imaginary friends and lose them we grow up? Or GROW UP? Are we always we really grown up? Luke and Cassie go on a date and take Daniel along. Well, he’s going whether anyone wants him to go.

Daniel is helpful in some ways to Luke. Cassie notices that he has some stuff going on in his head. Things go extra dark as Luke takes on the persona of Daniel. They are shown in a freaky Friday, strange special effects head molding together. Luke is sort of losing control and Daniel “is an aspect” of his mind as the good doctor tells him.

Daniel is a bandage for Luke. He keeps him together for some time but he cannot fully help him. Miles Robbins really takes on Luke’s mind-meddling behavior. He shows the normalcy and what may be considered the “crazy” or “insanity.” Mental health wasn’t always openly discussed and to see it like this in a movie and the people are not in some type of asylum or locked away is pleasantly relieving.

Some films have dealt with variety of mental health. What happens to people, how to fix them, how to help them? What makes them happy or sad?

Dr. Braun meets Daniel while hypnotizing him. Daniel manifest himself. They show Luke being ripped in half and Daniel entering his body as if Luke is devouring him. Daniel is Luke’s home. Luke allowed Daniel to enter him. The acting with Patrick and Miles going back and forth playing Daniel is so good. They almost seem like the same person and Luke is consumed by Daniel. This person he created has taken over him. Daniel devoured Luke.

He becomes a prisoner in his own mind. Luke embodies Daniel or Daniel embodies Luke. Luke is puffed up now as Daniel with his own brandish behavior. He visits Cassie with his alter-ego and she doesn’t seem to notice. While “trapped” in his mind, Luke is looking for a way out. A way to get Daniel out of his head. This is psychological torment in so many ways. Cassie says it, in a fascinating way, “like you can’t get rid of your shadows.” Cassie correlates the two while noticing something in her painting of Luke, It is fascinating. You can see the fear on Cassie’s face watching Luke walk towards her asking about the “darkness.” Again, Miles mimics Patrick’s mannerisms and facial expressions. Adam Egypt Mortimer captures so many beautiful shots in Daniel Isn’t Real. The prison of Luke’s mind reminds you an old medieval torture place. Luke uses imagination to bring a key to try and get out of his mind. 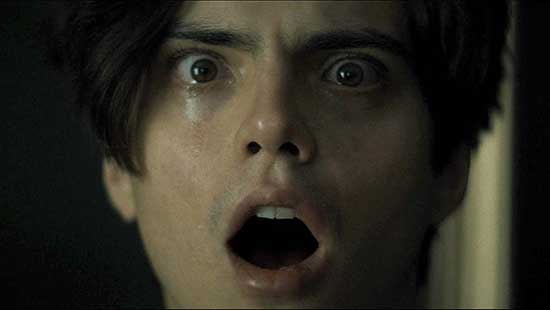 Cassie suffers all the wrath trying to fight off Luke/Daniel. Luke is trying to find a way out of his mind. He breaks down a wall. This is talked about so much. In life, we suffer, we are tormented, we fight obstacles and we BREAK DOWN WALLS. We overcome things we would never think we can overcome. This film touches on these things. It brings this darkness into the light. We often forget though, we do need some darkness for the light to exist and for it to have a chance to break through.

This battle towards the end is revealing. (Maybe, I am going too deep or digging too deep? But, it is truly fascinating. This movie is a complete psychological battle.) Luke using a sword may be medication? The ending is sad. It is heartbreaking. When you battle so much and sometimes lose. The last shot was exquisite, it was breathtakingly abstract and artistic yet horrific and makes you aware the demons some of us face every day are very real. 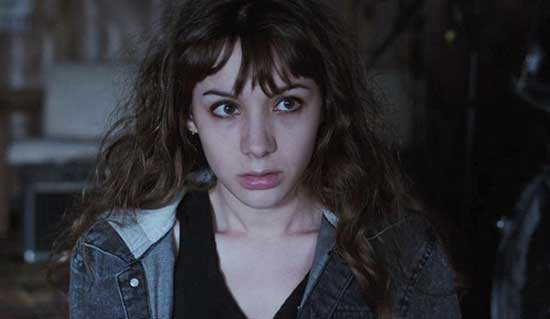 You must watch Daniel Isn’t Real, it should be shown in colleges and hell some therapist should watch it and doctors just to see what they say some times. This movie doesn’t belittle mental health. It doesn’t take that glimmer of hope of importance away either. Watch it. Watch, Daniel Isn’t Real.