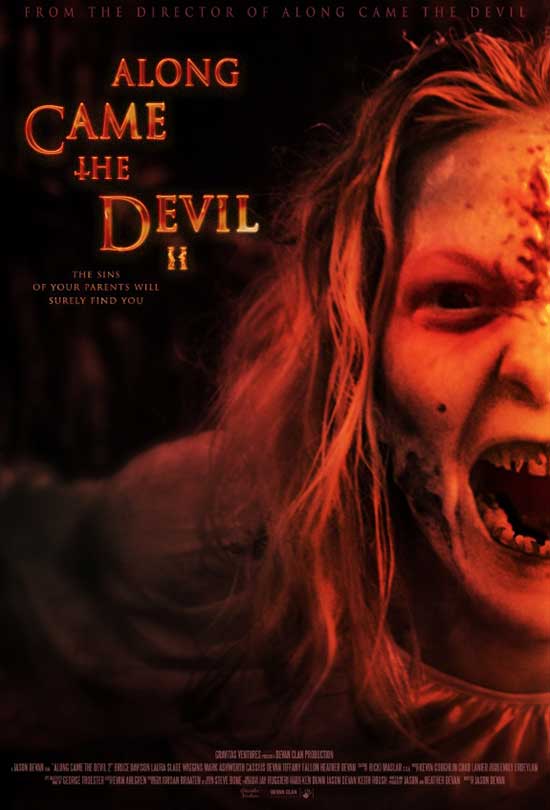 After receiving an unsettling voicemail, Jordan (Wiggins) returns home, looking for answers, only to find her estranged father and even more questions. A demonic force has attached itself to the town and no one is safe. The only one who seems to know anything is the small town’s Reverend.

Along Came The Devil 2 was written by Jason and Heather DeVan. Jason directed this much anticipated sequel. The first one was just as unsettling and scary. In ACTD2, we find a family looking for answers and peace of mind. The movie opens with our beloved Reverend Michael (Bruce Davison) saying the Lord’s Prayer. Now to a dark house with young Xander (portrayed by Heather and Jason’s talented son, Cassius DeVan.) this poor kid really goes through a lot in this film. DeVan told me during an interview that he would not in anyway, “sacrifice his son.” He wanted to have his son in the movie because he knows his talent and you can clearly see this entire cast is talented.

The camera pans through this dark home and we meet Xander (Cassius DeVan) who thinks maybe he hears his mom or dad. Boy, is he wrong and terrified.

(I am going to share a story. While I was watching this movie in the dark. I heard music playing and it was music from Jesus Christ Superstar. “I Don’t Know How To Love Him” was playing at random on Spotify. I turned the lights on, checked the doors and thought? Do I need Jesus, an exorcism, holy water? I grabbed the holy water and rosary beads just in case. It was a moment!)

We see the mom and dad sleeping peacefully. This felt so much like shots from The Shining and Amityville. This movie is beautifully shot and DeVan made a point to share that yes he was in fact paying homage to some of the classics in this sequel

Jordan returns (Laura Wiggins) she is much different from the first round in which we met her in Along Came The Devil. She is focused and you could say she has been through hell but that’s putting it lightly.

Mark is religious and meets with Reverend Michael. The Reverend wants Mark to “make amends” with Jordan and his girls. Mark has changed and “found God and Karen.” He has been saved. Mark is a carpenter. This feels sort of symbolic in many ways.

Reverend Michael takes Mark to a house where someone is experiencing something bad. Jordan shows up and it is a lot for her to handle. Jordan is upset about Ashley and Tanya (from Along Came The Devil)

The first one was traumatic as Mark locked his girls in a closet. Mark’s wife past away, she was the girl’s mother and it changed him. He is desperately trying to get Jordan to forgive him in some way. Jordan doesn’t want to even stay. She just wants to find Ashley, her sister. Karen and Xander welcome Jordan in the home. The movie has a good pace so far. This is a story that is fascinating. It shows what this family has turned into. It answers questions from the first film.

Jordan finds Xander talking to someone or something in his room. This was fascinating too because DeVan didn’t make this an “angry” family situation. Karen isn’t being mean to Jordan and they are welcoming of one another. It was sort of a relief to see this and not the fighting angry step-family situations. They can be difficult (Coming from experience.)

They sit down for dinner and Jordan talks about Aunt Tanya. Mark seemed to have a flashback moment. Mark seems tormented. If you didn’t see the first one, you need to watch it. There are intense moments in this film. It isn’t just an anticipated build-up but it a fear of this unknown. Reverend Michael arrives with salt and a cross. Xander meets him outside and seems to be a different kid for a few minutes until his father comes outside.

Reverend Michael is now dropping huge news on Mark. Possession films are sometimes about the same thing and some people just want to watch The Exorcist and some people want to know more. The Exorcist is forever a classic and one of the defining films. ACTD2 touches on the family aspect. The search for a truth that may or may not exist. 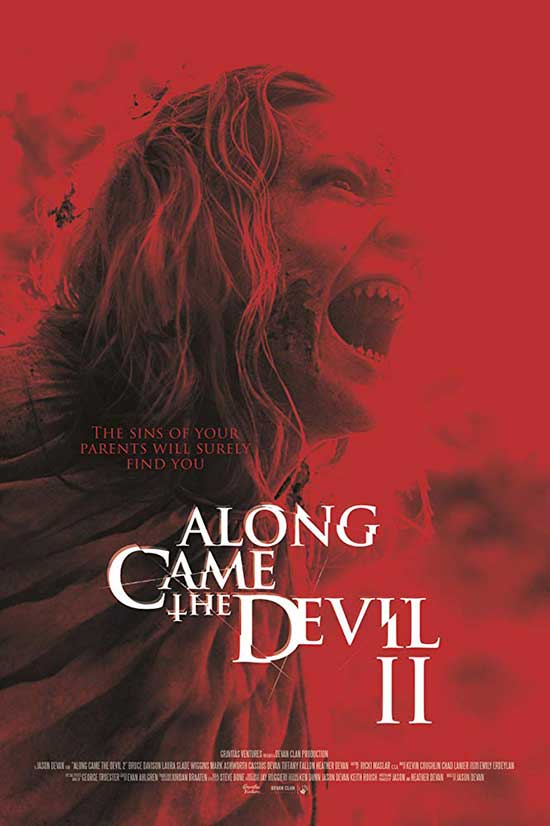 It’s odd if you do the research, many people believe and some say it is just “mental illness” or a “sickness.” But, does anyone really know? I don’t want to watch this film and be all…, “of so serious.” But, it does provoke questions. We also find Karen sweeping away the salt. (Sam and Dean are cringing right now.) She removes the cross too.

Jordan is on a mission. She learns some things that she may needed to hear.  Reverend Michael tells the horrific story and this brings on the goosebumps. Possession films are often about someone being possessed and removing whatever demon or force is in the person. This story brings family, the Devil, a reverend who is struggling with revealing too much yet he must.

Mark suffers a lot. He lost his wife, his children. He is tormented. The DeVan’s truly gives the fans answers. There is a scene in this movie that I was not expecting. I takes a lot to scare me. The “under the bed” scene. Jason DeVan talked to Horrornews.net about this scene. The build-up with Sarah Winbourne creates a butterfly effect of everybody is f*cked now.

Back to the “under the bed” scene. (Are you trying to make our hearts stop DeVan Clan? We love it though!) There hasn’t been something like this in a horror film. “At the Devil’s Ball” (1913) starts playing and now poor Karen thinks she’s in bed with Mark. OH GOD! The special effects are insane. They do an incredible job. It gets worse. Don’t worry. Jordan is trying to help Xander. Mark is possessed and the channeling of Jack Nicholson in The Shining shows Mark Ashworth’s acting is above and beyond. He makes Mark, the father scary as hell. Jordan has to get the hell out now. Who does one call during a situation like this? Jordan calls the police. Mark gets back into the house with an ax and calm fury. The low growling makes it scarier.

The Shining gets an incredible homage. You can see the appreciation the DeVan’s have for the classics. This cast does an excellent job. Jason and Heather made this film even better. The subtle shots including Mark slowly walking up the steps with the ax. It is such a beautiful homage to Jack Nicholson in The Shining. Mark moves slowly and it makes it worse. You think, let it be over, what is going to happen?

The police show up to deal with the devil. The actual devil that is possessing Mark who still has an axe. This isn’t going to end well for anyone. Jordan and Xander have to deal with this on their own. The police arrive and Mark is taken care of. (Watch the movie, you have to watch it!) The ending leaves us to think there could be another one. There could be a third film. You won’t ever expect this ending.