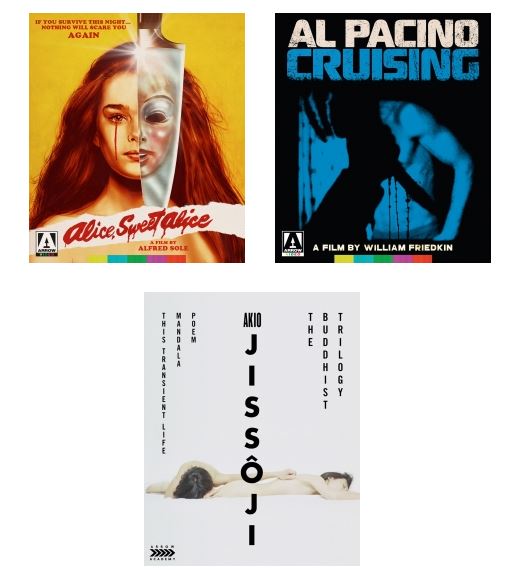 New from Arrow Video US and Arrow Academy US
ALICE, SWEET ALICE [Blu-ray] (8/6)
CRUISING [Blu-ray] (8/20)
AKIO JISSOJI: THE BUDDHIST TRILOGY
[Limited Edition Blu-ray] (8/20)
via MVD Entertainment Group
August with Arrow Means Slashers, Killers and Faith-Based Trilogies
Arrow’s August lineup is low in quantity, but high in quality with three new titles coming to Blu-ray that every collector will want to make part of their collection. Things get started on August 6th, with Alfred Sole’s attempt at crafting a Hitchcockian thriller with his classic slasher, Alice, Sweet Alice. A young girl is brutally murdered by an unknown lunatic in a bright yellow rain coat and a freakishly creepy translucent mask. As the killer continues to strike again and again, the young girl’s parents are forced to consider this gruesome reality – perhaps the killer is their eldest daughter, Alice. Ranked #89 on Bravo’s 100 Scariest Movie Moments, Alice, Sweet Alice features kill scenes that are shocking to even the most hardcore slasher enthusiasts. Fun fact: the film marks the screen debut of future Flower Shop Mystery star, Brooke Shields.
On August 20th, Arrow brings home William Friedkin’s controversial erotic crime thriller, Cruising. Oscar-winner Al Pacino stars as a New York City cop assigned an undercover gig that sends him deep into the world of the gay S&M and leather bars in the Meatpacking District in an effort to track down a killer targeting gay men. Originally panned by critics and activists alike, the film has gained a cult following and been more highly received over the years.
The final Arrow release for the month, also hitting shelves on August 20th, is a collection of Akio Jissôji’s films – This Transient Life, Mandara, and Poem – that make up The Buddhist Trilogy. These three New Wave films made for the Art Theatre Guild take a controversial and shocking exploration through faith. As an added bonus, Jissôji’s 1974 feature It Was a Faint Dream, a film that touches on similar themes as the trilogy, is included.
As per usual, each release this month features a High Definition transfer, including a new 4K scan for Cruising, and plenty of special features to keep you entertained well after the credits roll.
Share