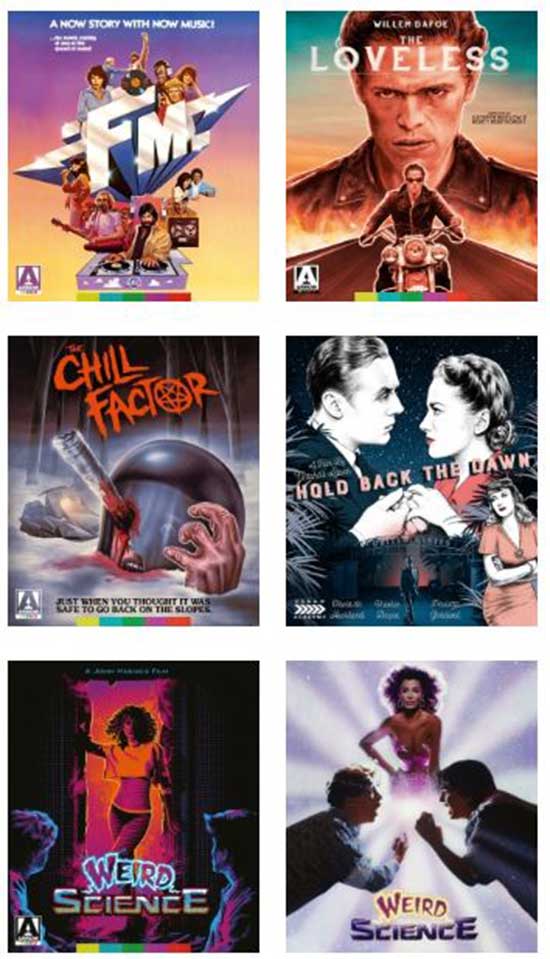 This July Arrow Wants to Help You Chill While Making Things Weird
With the dog days of summer upon us, Arrow continues to provide plenty of reasons to stay inside and beat the heat. This July, Arrow brings home four new titles that will help make this summer vacation the best one yet.
On July 2nd, Arrow is proud to bring home the late ’70s rock-n-roll comedy, FM. Oscar-nominated John A. Alonzo directs this story of radio station mutiny. After being forced to play more commercials, including military recruitment ads, DJs and other employees take control and fight their corporate bosses by playing as much music as possible. This new HD release, transferred from the original camera negatives, features a rocking collection of special features including a brand new interview with the film’s star, Michael Brandon.
Kathryn Bigelow’s debut feature (co-directed by Monty Montgomery), The Loveless, comes home on July 9th. Set in the ’50s, The Loveless is the story of a motorcycle gang heading to the races in Daytona. Along the way they stop in a small southern town, leaving the locals less they pleased. Willem Dafoe, also making his debut, stars. The Loveless is presented fully restored and in HD for the first time, with a new transfer approved by Montgomery and director of photography, Doyle Smith.
On July 16th, Arrow offers up two releases on complete opposite sides of the spectrum. First up is 1941’s Hold Back the Dawn. Directed by Mitchell Leisen, and nominated for six Oscars, Hold Back the Dawn is the story of one man’s hope of making it to the U.S. by marrying a citizen. The plan is to leave his would-be bride upon making his way into the country, but the plan has a few hiccups thanks to a determined immigration officer and a true love that begins to blossom. Hold Back the Dawn is presented in HD for the first time.
The second release coming July 16th is The Chill Factor. This early ’90s effort, also known as Demon Possessed, is the only film directed by producer Christopher Webster. A group of friends out on a snowmobile trip seek refuge when one of them gets knocked unconscious following an accident. They locate an abandoned cabin to take cover, but this particularly cabin happens to hold a number of bizarre religious artifacts and they mistakenly awaken a terrible evil. This rare horror oddity, which didn’t see much of a release beyond a small VHS run, gets a brand new 2K transfer and comes fully loaded with an avalanche of special features.
Rounding out the month is the July 23rd release of Weird Science, one of the greatest films the ’80s has to offer. Coming in a totally awesome steelbook, this John Hughes classic about a pair of nerds that attempt to create the perfect woman via their computer is a must for any collection. This release from Arrow features a brand new 4K restoration from the original negatives and includes the original theatrical release as well as the extended version. As an added bonus, a standard definition transfer of the edited-for-TV release is included. Additional special features include an archive documentary and a number of new interviews.
Share